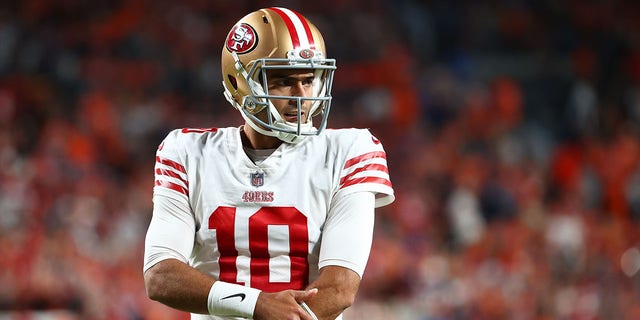 If Jimmy Garoppolo is going to continue to play like he did Sunday night in Denver, the San Francisco 49ers are going to be in trouble.

In his first start of the season after returning to his QB spot after Trey Lance broke an ankle, Garoppolo went just 18-for-29 for 211 yards with one touchdown and an interception.

He also ran out of the back of the end zone for a Broncos safety.

Denver wasn’t much better, but it did enough to bring home an 11-10 win over the Niners.

Former Niners tight end Brent Jones has defended Garoppolo in the past, but there was no defending Sunday night’s performance.

“I am laying the blame … I don’t do this very often. In fact, I don’t do it hardly at all. Jimmy Garoppolo was horrible,” Jones told KNBR in San Francisco Wednesday. “What the heck? When you’re a professional football player and quarterback, you know where the back of the end zone is. That was so outrageous. You know how many times I’ve seen that from a veteran quarterback? 0.0 from a veteran quarterback, it’s just the worst.”

Bradley Chubb (55) of the Denver Broncos sacks Jimmy Garoppolo (10) of the San Francisco 49ers during the fourth quarter of a game at Empower Field At Mile High Sept. 25, 2022, in Denver, Colo.
(Jamie Schwaberow/Getty Images)

Jones was especially ticked off with Garoppolo’s reactions after the game. The three-time Super Bowl champion said Garoppolo shouldn’t “go glad handing the other team” after playing a vital role in such a bad loss.

BRONCOS’ DEFENSE COMES UP CLUTCH IN UGLY WIN OVER 49ERS

“I’ve never seen that from any quarterback ever, that has ever been any good,” Jones said. “Steve Young? No way. Joe Montana? Hell no. Brett Favre? No chance in heck. You think Russell Wilson is laughing after he throws a pick, steps out of the end zone for a safety and fumbles a ball and plays horrible and his team’s 1-2 and the reason they lost the game?

“It almost looked like he didn’t even care. It was so frustrating, and maybe I was just mad because the game was so ugly. If that’s me, I’m running for the locker room. I am not smiling, I am not talking to anybody for a week if you play like that. I just don’t get his disposition, but that was really frustrating. Icing on the cake.”

San Francisco 49ers quarterback Jimmy Garoppolo smiles in the huddle during the first half of a game against the Denver Broncos in Denver, Sunday, Sept. 25, 2022.
(AP Photo/Jack Dempsey)

The Niners will hope to avoid two straight losses Monday night when they host the Los Angeles Rams in an NFC Championship rematch.