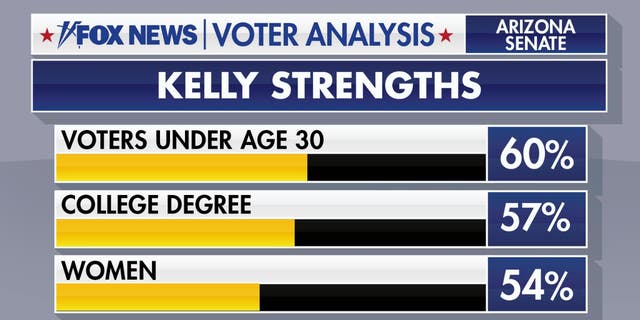 Arizona was one of the closest battleground states in 2020, and the 2022 Senate race came down to the wire as well. In the end, incumbent Sen. Mark Kelly, D-Ariz., bested Republican newcomer Blake Masters, keeping Democratic dreams of maintaining control of the Senate alive.

Kelly won the lion’s share of moderates, and even the backing of more than one in ten Republicans (13%).

Masters kept the election close by racking up solid margins among Whites without a college degree, gun-owner households and rural voters. He also won suburban voters by two points, thanks to a 20-point advantage among suburban men.

Arizona’s Hispanic voters, a pivotal voting bloc, went for Biden by 19 percentage points in 2020. The Democratic margin in the Senate race this year was slightly larger (+22).

Half of voters said they were concerned that Kelly’s views were too extreme, but notably more were concerned, nearly two-thirds, about Masters.

The issue environment in Arizona was similar to nearby Nevada – Masters narrowly won among those who said which party controlled the Senate was most important to their vote (5-point Masters advantage) and had a wider edge among those primarily focused on inflation (+27 points). Kelly won by a similar margin among those emphasizing the future of democracy (+32 points) and by a 55-point landslide among those for whom the Dobbs v. Jackson Supreme Court decision on abortion was most important.

Border security was another important issue in the Senate race, with voters overwhelmingly favoring stepped-up security on the southern border.

Although the desire for greater border security was not enough to propel Masters to a win, it helped keep Republican Kari Lake in contention in the governor’s race – which, as of Monday evening, remained too close to call.

Lake stayed in the running by keeping the race slightly closer among moderates (who backed Democrat Katie Hobbs by 27 points) and winning suburban voters by a wider margin (+5 points) than Masters.

The Fox News Voter Analysis is a survey of more than 90,000 voters and 20,000 nonvoters conducted from Oct. 31 through Nov. 8. Full methodological details are available here.