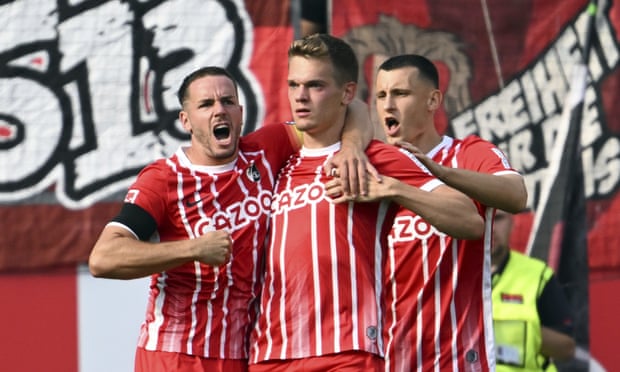 It took a bit of fortune but few, bar those of a Bayer Leverkusen persuasion, were complaining. Freiburg eventually came out on top in a five-goal thriller at BayArena on Saturday, a scenario that had looked a long way from likely at half-time. Their coach, Christian Streich, called it “a lucky win”, with characteristic frankness.

No matter. Freiburg go back into European competition this week on top of the Bundesliga. They’ve been there before only once before, after winning 4-0 against Stuttgart on the opening day of 2000-01, so whether you can even count that is open to debate. Streich said post-match that he’s not bothered about this doubtless fleeting moment on the top rung either. “I’m not interested in that,” he told Sky. “Everything is going well at the moment – so well that we are the luckier of the teams in some of these games.”

Nevertheless Ritsu Doan’s back-post winner from point-blank range sees his side at the summit on goal difference over Borussia Dortmund after five games, in a season which has already heard further talk of ways to make the Bundesliga a competitive title race after Bayern Munich’s ominous start of 15 goals in their three opening wins, this is worth celebrating.

For those of you hoping that coach and club are channelling their inner Leicester, Streich pushed the mind in that direction by going full Claudio Ranieri in his post-match press conference. Far from basking in a sunny early season spot, the coach talked about avoiding relegation being his top priority for the domestic season. “In a year in which we play in Europe, it’s about playing some games in the European competition and keeping Freiburg in the Bundesliga,” Streich said. “If that happens, it will have been a good year. And I’m completely serious about that.”

He has a point, to an extent. Their last European campaign, in 2013-14, saw them stretched, as might be expected of a modestly sized top-flight club. They finished 14th, a slump from the previous term’s top-five finish that landed them into Europe in the first place. Streich can remember that because, well, he was there. During the mid-season break the Bundesliga’s longest-serving coach will reach 11 years in sole charge of the first team. The butcher’s son who has brought approachability to the Bundesliga benches is to be cherished.

In the lead-up to this game, Streich again showed how different he is, as one of the few figures involved in the elite game not complaining about the punishing schedule in the next few months. “There are worse things for me,” he smiled. “We have worked for it and for us it’s an absolute pleasure.” Despite his steadiness Freiburg are no longer just a plucky underdog. Having moved into their Europa-Park Stadion last year, they are going places.

If anything on the pitch has underlined the club moving up a level, it has been the return of Matthias Ginter. Others have come back before – Jonathan Schmid and Vincenzo Grifo, for example – but usually after failing to recapture the magic elsewhere. World Cup-winning defender Ginter is slightly different. After leaving Borussia Dortmund, Borussia Mönchengladbach paid €17m to take him in 2017. The player had other options when leaving this summer and, though there is sentiment in his decision to rejoin, he wouldn’t have come had he not believed in the club’s ambition. He is still only 28, with plenty of good years ahead of him.

If Ginter coming home is his career coming full circle, it feels like a symbolic and significant moment for coach and club too. Given his debut by Streich in January 2012 having just turned 18, Ginter scored a late winner in a relegation battle with Augsburg that built the platform for a great escape; a calling card for the teenager which also launched the legend of Streich, an initially reluctant coach who has now become a club, and national, mainstay. After Leverkusen’s strong first-half display, with Kerem Demirbay’s goal scant reward for their dominance, Ginter pulled them back in, launching himself between two defenders to equalise with a diving header. Though the Leverkusen debutant Callum Hudson-Odoi later gave his team a second wind, setting up Patrik Schick for an equaliser at 2-2 shortly after coming on, Freiburg and Doan had an answer.

“I’m only going to stay as long as I’m able to remain who I am,” Streich insisted shortly after guiding Freiburg away from the drop in 2012. He has stuck rigidly to that, and that’s why he’s still there. There have been tough moments, such as a final-day relegation in 2015, though Streich guided the club back to the top flight at the first attempt. Sometimes you wish he would just put his feet up for a second and enjoy the sunshine. He deserves to. Though if there are things that could be fixed in the Bundesliga, changing Christian Streich is not one of them.

The big match in Berlin between the top two at the start of play, Union and Bayern, didn’t disappoint, with the red-hot Sheraldo Becker lighting the blue touchpaper by volleying past Manuel Neuer inside 12 minutes. Joshua Kimmich quickly equalised with a rocket of his own, but Julian Nagelsmann’s men couldn’t find the decisive blow, with the Union goalkeeper Frederik Rønnow and his defence standing firm. The substitute Jamie Leweling almost stole it in the closing stages only to be denied by Neuer, who praised the home side’s canniness. “They were our toughest opponents so far,” said the Germany goalkeeper.

Another weekend and another one-goal win for Borussia Dortmund, who beat Hoffenheim on Friday night thanks to a first-half Marco Reus goal. This, though, was a more composed BVB, with the loss of Jamie Bynoe-Gittens to a shoulder injury after a collision with Ozan Kabak not knocking them off course. The implosion against Werder Bremen is beginning to look more of an exception as the weeks go by, with Dortmund now having three clean sheets from their opening five games. The visiting coach, André Breitenreiter, also recognised the gulf between the teams, calling his side “too sloppy and too passive”.

Two of the Bundesliga’s Champions League entrants warmed up for this week’s European kick-off in Frankfurt, where Eintracht pummelled RB Leipzig 4-0. They were harder running and more decisive at both ends of the pitch. Randal Kolo Muani and Mario Götze were again both outstanding, with the team’s upgrades on paper since their Europa League win now becoming flesh. “Wow,” was the simple analysis of Frankfurt’s coach, Oliver Glasner. Leipzig, who were dreadful, have a big few weeks, with the visits of Shakhtar Donetsk and Dortmund followed swiftly by a trip to Real Madrid.

Werder Bremen were at it again, scoring twice in the final five minutes at Bochum to win – both by Niclas Füllkrug, one an emphatic header and one a penalty after Oli Burke was fouled. Their late goals already constitute a record, with no team ever having scored five stoppage-time goals after five games, as Kicker’s Tim Lüddecke pointed out.

A first win of the season for Hertha, at Augsburg, was sealed by Marco Richter, with his stoppage-time goal in the Berliners’ 2-0 win coming just 55 days after he was diagnosed with testicular cancer. “It’s sensational that he’s back with us,” enthused coach Sandro Schwarz.

The History of the Bible, Animated | National Geographic