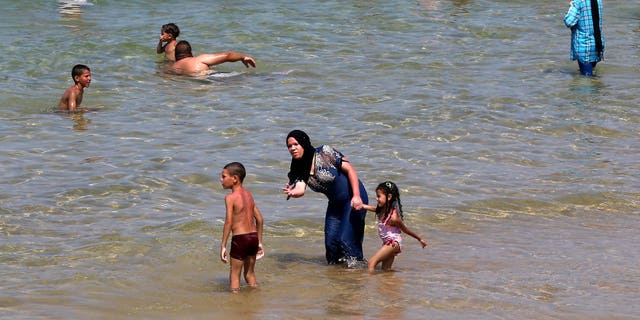 France’s highest court ruled against “burkinis” at public swimming facilities on Tuesday, but did not crack down on public toplessness for women.

France’s Council of State, the highest administrative court in the country, ruled that allowing the burkini swimwear — a full-length, modest swimsuit worn by Muslim women — would violate the nation’s secular governance and laws against religious influence.

Not long after the ban was lifted, it was reinstated by Grenoble’s administrative tribunal. The Council of State’s decision on the issue has been anticipated for weeks. The burkini had previously been legalized by the city of Grenoble in May 2021, along with topless swimming, after outcry from residents.

The Council of State overturned lower court rulings that allowed the burkini, stating that the religious nature of the garment and the implications it has for women’s rights make it unfit for public pools.

Algerian women wear a “burkini” in the sea at the beach of Oran, West of Algiers on Aug. 5, 2017.
(Billal Bensalem/NurPhoto via Getty Images)

Muslim woman wearing a burkini while enjoying the warm water in the Gulf of Mexico at San Marco Beach on Marco Island, Florida, on Sept. 1, 2018.
(Creative Touch Imaging Ltd./NurPhoto via Getty Images)

France, the birthplace of the bikini, has for years struggled with its standards on women’s swimwear.

In 2016, the swimsuits became controversial following an Islamic extremist attack on the city of Nice, France. Towns began banning the burkini, with police officers fining Muslim women found wearing them who refused to remove some of their clothes or leave the beach.

Grenoble mayor Eric Piolle (L), of the French ecologist party EELV, next to his first deputy Elisa Martin (C), chairs a city council session set to scrap its bathing dress code in municipal pools and by so authorising the wearing of the “burkini” all-in-one swimsuit for women, on May 16, 2022 in Grenoble. (Photo by JEFF PACHOUD/AFP via Getty Images)

France is not alone in the growing conversation about swimwear and lack thereof. Nudity laws banning topless women at the beach have been challenged and sometimes overturned across the United States.

A Nantucket, Massachusetts proposal titled “Gender Equality on Beaches” allowing anyone to go topless on beaches was passed last month at the annual town meeting.

The amendment read: “In order to promote equality for all persons, any person shall be allowed to be topless on any public or private beach” in town.”

The bylaw, proposed by seventh-generation Nantucket resident Dorothy Stover, was passed with a 327-242 vote by the Gender Equality on Beaches, according to WCVB. The next step is for the measure now to be approved by the state attorney general’s office.

Fox News’ Haley Chi-Sing and The New York Post contributed to this report.

TYPES OF STUDENTS ON A SCHOOL BUS || Food Sneaking Ideas! Rich VS Broke VS Teacher by 123 GO! FOOD