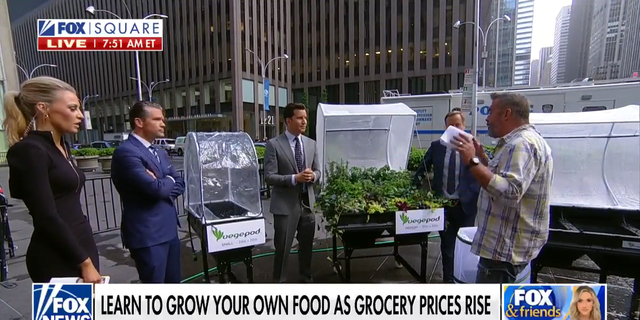 Looking for a way to save money on grocery bills amid today’s very high prices?

Growing your own food could be a solution.

“If you’ve ever tried to have a garden, digging in the dirt can be tough,” Bedell said.

“You’re bending over, you’re working everything in the ground. You have pests and insects and things like that.”

HOW TO PREPARE YOUR YARD AND GARDEN FOR SPRING

Vegepod — a raised garden bed system — is the first product that Bedell recommends because it allows gardeners to work at a comfortable waist height.

The brand’s compatible elevated stands can be set in a fixed location — or purchased with trolley wheels that allow it to be moved with ease.

Bedell thinks this could help urban gardeners who have terraces or balconies.

Among the other design perks that Bedell appreciates about Vegepod’s garden beds: They’re made from polymer non-rot materials.

They also have a self-watering wicking system that keeps roots adequately watered.

For gardeners on the move, Bedell recommends the Vegepod’s ultra-portable Vegebag, which allows people to care for plants while on extended trips.

And they have a variety of protective hoods that can function as a greenhouse, mister and shade.

“This will allow you to [start] your garden earlier in the year and also let it run longer into the season,” Bedell said on “Fox & Friends Weekend” as he pointed out the brand’s PVC hothouse cover.

GARDENING 101: 7 EASY FLOWERS TO PLANT THIS SPRING, PLUS THE TOOLS YOU’LL NEED

Waterings can be timed with the brand’s mister-equipped covers, which are connectable to programmable garden hoses. This way, produce can be taken care of when gardeners aren’t home.

Bedell added that Vegepod’s covers let the sun shine through.

“It allows all the goodness to come into the plants, but it keeps out birds, insects, pests and [weeds],” he said.

HOW TO GROW A HEALTHY VEGETABLE GARDEN (AND ACTUALLY USE IT!)

For gardeners on the move, Bedell recommends the Vegepod’s ultra-portable Vegebag, which allows people to care for plants while they’re on extended trips.

Bedell said the plant care bag can work for families who, like his own, enjoy camping for a month at a time.

ReadyWise claims these seeds have a 10-year shelf life.

“All the lists tell you what’s included in it,” Bedell said. “It’s unbelievable. All the nutrition that you need is in this bucket.”

He added, “You can grow every season and also build up your stock as a prepper.”

Bedell’s gardening tips come at a time when many American families are feeling the effects of inflation.

On Wednesday, the U.S. Bureau of Labor Statistics reported that April 2022’s consumer price index increased 8.3% “before seasonal adjustment” on “all items” compared to the previous year.

“The food index rose 0.9% over the month as the food at home index rose 1%,” the agency wrote in its latest consumer price index news release.