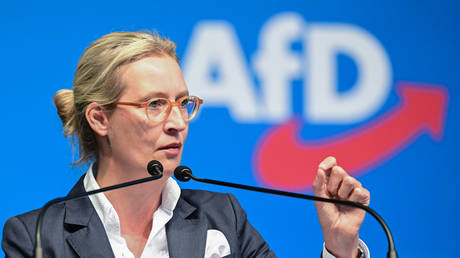 Germany’s Interior Minister Nancy Faeser has expressed remorse after posing for an upbeat photo with a glass of champagne in her hand during a trip to Ukraine in late July.

“I regret the photo,” Faeser said on Tuesday after being asked about it during a live event with the RND news network in Potsdam. It was “certainly not appropriate,” she added.

The interior minister was lambasted by commentators and the opposition after the image of her, along with Germany’s Labor Minister Hubertus Heil and Ambassador to Ukraine Anka Feldhusen, enjoying drinks with Kiev Mayor and boxing legend Vitaly Klitschko on an open balcony, surfaced online.

Critics pointed out that Ukraine, which is now in conflict with Russia, was not a vacation spot or a place to post smiling pictures from. The Secretary General of the CDU (Christian Democratic Union), Mario Czaja, insisted that the photo with champagne flutes “spoke volumes” about the Social Democratic Party (SPD) members in the governing coalition of Chancellor Olaf Scholz.

However, Faeser insisted that the controversial picture showed that everyday life is returning to Kiev. “People go shopping. Flowers have been planted in public spaces again. People go to bars, they sit in cafés, they go about their work,” the minister explained.

Russian forces withdrew from the areas surrounding the Ukrainian capital in late March and early April as “a gesture of goodwill” after the launch of peace talks with the Ukrainian leadership in Istanbul. However, the negotiations have since stalled, with Moscow accusing Kiev of backtracking on the progress achieved in Turkey.

Since the Russian pull-back, the fighting has been mainly focused on the Donbass region in the south-east of Ukraine, hundreds of kilometers from the capital. However, Russia has also carried out several high-precision strikes against military targets in Kiev during this period.

The interior minister also explained the circumstances in which the photo was taken. “In the evening we were invited by the ambassador and by the Mayor of Kiev Vitaly Klitschko, and in the end we chose the same drink as him,” Faeser explained.

“I wouldn’t do that again. Because that expresses something that is inappropriate when you come from another country,” she added.

Russia sent troops into Ukraine on February 24, citing Kiev’s failure to implement the Minsk agreements, designed to give the regions of Donetsk and Lugansk special status within the Ukrainian state. The protocols, brokered by Germany and France, were first signed in 2014. Former Ukrainian President Pyotr Poroshenko has since admitted that Kiev’s main goal was to use the ceasefire to buy time and “create powerful armed forces.”