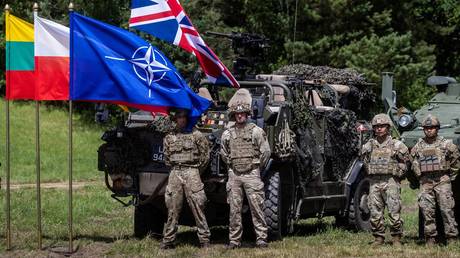 The information “can be incorporated into war planning and help the Ukrainian army to assess the combat effectiveness and morale of Russian units or to check their positions,” Zeit wrote, describing it as the German contribution to the “turning point” on the battlefield.

Zeit also revealed that German spies fed the US some intelligence from Baghdad during the 2003 Iraq invasion. Berlin had officially declined to share information with Washington during the conflicts in Iraq and Afghanistan, reportedly to BND’s frustration. This time around, however, the spies unanimously decided that the “exceptional historical situation” warranted helping the Ukrainians.

Bundesnachrichtendienst (BND) chief Bruno Kahl had met with his Ukrainian counterpart at the Munich Security Conference in February, and was in Kiev when the Russian “invasion” began, the magazine said.

The German government has a policy of not commenting on intelligence matters, and Chancellor Olaf Scholz continues to insist that Berlin is not a party to the conflict. Just to be on the safe side, the BND commissioned a legal analysis in May, and its lawyers said that sharing intelligence did not mean Germany was party to the war, under international law.

The question, according to Zeit, is whether Russian President Vladimit Putin would care for the German lawyers’ parsing of legal distinctions. The magazine’s sources argued that “Ukraine’s survival is at stake” and that “Putin only decides when to blame the West based on strategic considerations.”

Other NATO countries, such as the US and the UK, are helping Ukraine “much more offensively,” providing “real-time intelligence information that can be used for dynamic targeting.” While the Americans were initially reluctant to give Ukraine such “granular” data at first, this restriction was lifted “a few months” ago, Zeit said.

In May, the Washington Post published a report about US “rules” for intelligence-sharing, explaining how American spies would feed Ukraine information that technically stopped short of their definition of “targeting,” thereby making sure the US wasn’t held responsible for any Ukrainian attacks inside Russia.

As German spies told Zeit, the Kremlin chose not to make a fuss over Americans giving Ukraine “much more precise target coordinates.” According to the magazine, it was this US intelligence that made possible the sinking of the Russian cruiser Moskva in April and the killing of several Russian generals, though the White House has officially denied it.

“Putin knows what the role of intelligence services is. The chancellor and the BND just don’t want to talk about it publicly,” wrote Zeit. Moreover, Russia has known about this for “a long time,” as the Ukrainian military is “riddled with Russian informants,” the German magazine added.

Dan Andrews BLASTED for ditching his own electorate to vote