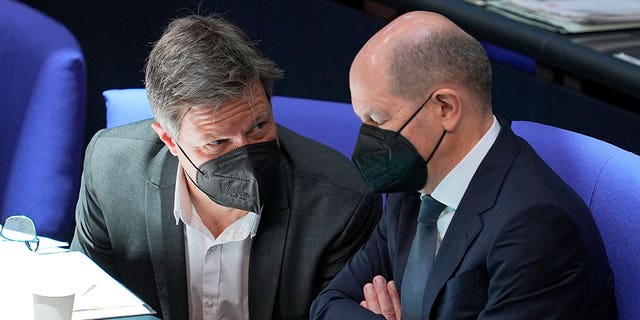 Robert Habeck told reporters that “all G7 ministers agreed completely that this (would be) a one-sided and clear breach of the existing contracts” for natural gas, which is used to heat homes, generate electricity and power industry.

He said officials from France, Germany, Italy, Japan, the United States, the United Kingdom and Canada met Friday to coordinate and that European Union representatives also were present.

Habeck said “payment in ruble is not acceptable and we will urge the companies affected not to follow (Russian President Vladimir) Putin’s demand.”

Putin announced last week that Russia will demand “unfriendly” countries pay for natural gas only in Russian currency from now on, instructing the central bank to work out a procedure for buyers to acquire rubles in Russia. The demand sent already high gas prices even higher amid fears it could be a prelude to a natural gas shutoff, which could disrupt Europe’s economy and hurt Russia’s finances.

Economists said the move appeared designed to try to support the ruble, which has collapsed against other currencies since Putin invaded Ukraine on Feb. 24 and Western countries responded with far-reaching sanctions against Moscow. But some analysts expressed doubt that it would work.

Asked by reporters earlier Monday if Russia could cut natural gas supplies to European customers if they reject the demand to pay in rubles, Kremlin spokesman Dmitry Peskov said in a conference call that “we clearly aren’t going to supply gas for free.”

“In our situation, it’s hardly possible and feasible to engage in charity for Europe,” Peskov said.

ZELENSKYY IS NOT AFRAID TO STAND WITH UKRAINE: FMR. ZELENSKYY SPOKESPERSON

Asked what happens if Russia turns off the taps now, Germany’s energy minister said, “We are prepared for all scenarios.”

“Putin’s demand to convert the contracts to ruble (means) he is standing with his back to the wall in that regard, otherwise he wouldn’t have made that demand,” Habeck said, adding that Russia needs rubles to finance its war at home, such as payments to troops.

European governments have shied away from imposing a ban on energy imports from Russia over fears of the impact it would have on the economy. Europe gets 40% of its gas and 25% of its oil from Russia, and since the war, has scrambled to set out proposals to reduce its dependency. Russia is just as reliant on Europe, with oil and gas its dominant sector and paying for government.

Estimates of the impact of a gas boycott or embargo on Europe vary but most involve a substantial loss of economic output, especially since the war and the resulting surge in energy and raw material prices is already weighing on Europe’s economy. U.S. sanctions permit exceptions for payments for oil and gas, though it has banned Russian energy imports itself.

Putin’s rubles payment proposal led Germany’s utilities association, the BDEW, to call on the government to declare an “early warning” of an energy emergency.

EXILED RUSSIAN JOURNALIST DETAILS DANGERS OF PUTIN’S ASSAULT ON UKRAINE: THERE IS NO ‘REAL STRATEGY’

A spokeswoman said Monday that the government does not see the need for an early warning declaration at this time.

When pressed by reporters on making the declaration, German Chancellor Olaf Scholz said “the contracts we know lay down the euro as payment currency and the companies will pay according to the contracts they have signed.”

What currency is used to buy Russian energy “doesn’t really matter,” said Robin Brooks, chief economist at the Institute of International Finance, a trade group for the world’s banks.

“What matters is that energy exports give Russia purchasing power, which it can convert into goods from abroad,” she said.

Putin’s demand for payment in rubles “is mostly window dressing. It doesn’t change the underlying transactions,’’ Brooks said. “At the margin, I would call this another ‘own goal’ by Putin, since it increases the focus on gas purchases by Western Europe and could potentially raise the odds of an import stop.”