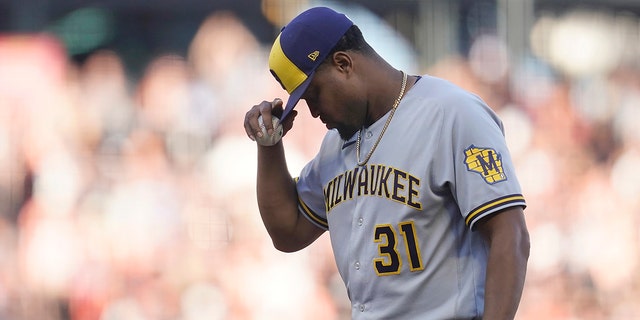 The San Francisco Giants and Milwaukee Brewers’ series this weekend has been nothing short of dramatic, and the ending of Saturday’s game added to the theater.

Wilmer Flores was on third base, Darin Ruf was on second base and Evan Longoria had gotten to first base after getting hit by a pitch.

Gustave had a 1-2 count on Yastrzemski and appeared to step off the mound when home plate umpire Pat Hoberg called a balk. Flores trotted home, and the Giants closed the door in the ninth for the 2-1 win.

Several Brewers players shook their heads in disagreement with the call when watching it on the replay. MLB fans on Twitter were also unsure of where the balk was.

CLAYTON KERSHAW TAKES PERFECT GAME INTO 8TH, HELPS DODGERS WIN: ‘I REALLY WANTED TO DO IT’

“Apparently, they saw a little flinch when he came up, something that wasn’t normal,” he told reporters, via MLB.com. “The guy saw a balk, he called it.”

The San Francisco Giants’ Wilmer Flores, left, is congratulated by Mike Yastrzemski after scoring against the Milwaukee Brewers during the eighth inning in San Francisco Saturday, July 16, 2022.
(AP Photo/Jeff Chiu)

However, crew chief umpire Bruce Dreckman said it was a “pretty cut and dry” call.

“It’s a start and a stop,” he told a pool reporter. “When they start bringing their hands up, they can’t just bring them up and stop in mid-stroke of their pitching delivery.”

Ruf scored the other run in the game on a homer off Brewers starter Eric Lauer.

“It’s nice to win some of these close games,” Yastrzemski said. “We’ve had some heartbreakers this year where we’ve lost by one run when we’ve been in the game. It’s nice to just be on the winning side of that.”