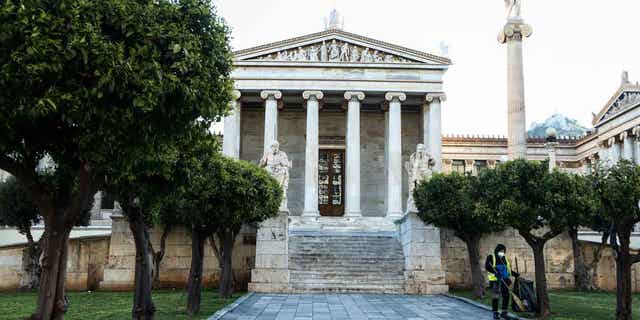 A raid on a sprawling university campus complex in Athens led to the arrests of 32 people who are suspected of belonging to gangs that carried out armed robberies, drug trafficking and other offenses, police in Greece said Wednesday.

The suspects are not students but allegedly used old dormitory rooms on the campus of the National Technical University of Athens to stash weapons, drugs and money, authorities said.

“They used the campus as a staging ground to carry out robberies and drug trafficking,” Dimitris Davalos, director of the criminal division of the greater Athens police department, said.

GREECE IS REOPENING TOURISM SECTORS IN MAY, SAYS PRIME MINISTER

One suspect was hospitalized with a gunshot wound after allegedly attacking an arresting officer who also was injured, police said.

Police said they had seized firearms, knives, expandable batons and other weapons, along with cocaine, marijuana and drug-processing equipment.

The raid, involving police special forces and members of an antiterrorism unit, took place Tuesday amid a politically charged debate on policing at Greek universities.

For decades, police officers were legally banned from entering campus grounds without permission from academic authorities. The restrictions were essentially scrapped in recent years, but plans to set up a campus police force has met strong resistance from left-wing opposition parties and many student groups.