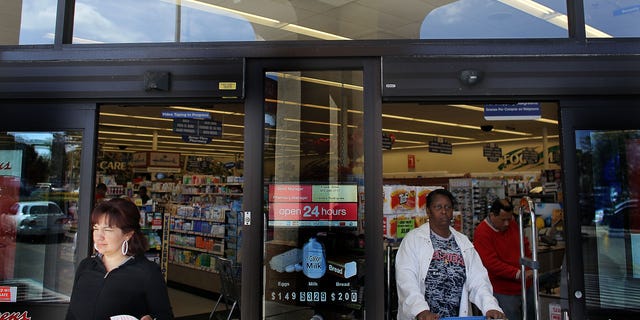 For the left to maintain their often unfortunate beliefs, they have to assume the very worst about the people they claim to defend. Remember, it’s the party that told you Blacks can’t get IDs. But also the poor, you know that they steal, right? Yes, that’s what we always hear in NYC. That and gunshots.

But whenever goods are stolen, a Democrat will say it’s because the people steal and can’t afford to buy them, even though the thieves sell the stolen crap immediately after it’s grabbed.

Remember when the looting took off after the bail reforms with people stealing baby formula and diapers? AOC was saying it’s because the poor needed this stuff. But if anybody needs a diaper, it’s her. Because she’s so full of crap – see, I’m growing up.

Of course, most poor people do not steal. How much money you have has nothing to do with how honest you are. The problem here in New York is clear. Stealing is simply incentivized, so the already criminalized simply get more criminally. And I invented that word “criminally.”

It’s not like poor, decent people just embarked on a life of crime because Walgreens got lazy. No, our liberal DAs just made recidivism acceptable for the riff-raff. Take New York’s infamous serial thief who led the league in shoplifting busts with 46 arrests – four more, and he gets a free toaster, which is weird because he already stole seven.

Now, was it his poverty that drove him? Now, I’m guessing he drove himself probably in a stolen Lexus. But did he use the products he stole, like every Democrat claimed these impoverished souls would? No, he’d pilfer drugstores, then flip the booty for cash. I know this for a fact because I bought 12 men in Speed Sticks off him. What can I say if you ever dipped them in ranch dressing? They’re delicious.

The New York Post, owned by our parent company Life Alert, interviewed the guy – that was a joke – and he said everything that you knew to be true. He kept robbing only because he could keep robbing thanks to the soft-on-crime prosecutors. He robbed Walgreens so often he’d bring in his own reusable bag.

I don’t blame him. If he actually did pay for the goods, imagine the length of his receipts. I don’t understand it, either.

GREG GUTFELD: THE LEFT HAS TURNED INTO EVERYTHING THEY HATED

Isaac Rodriguez robbed one Walgreens at least 37 times last year. This guy was on camera more than [Brian] Kilmeade has been in the last two years. He’ll be actually subbing for Kilmeade on “Fox & Friends” weekends.

But he stole everything from protein drinks to body lotion, which when you mix together, makes a delicious yogurt. He also stole toothpaste, soap and tampons. Yes, tampons. Now, this might have tipped some off that this wasn’t for Isaac’s personal use, but then again, men can now have babies, so why not periods? They then sell the stolen stuff on the street or in pawnshops for cash.

And he kept going, not because he had to feed a family. It was due to the revolving door justice system that kept him in business while putting stores out of business. Remember, this new craze was brought to you by reforms that got rid of pretrial detention, cash bail for misdemeanors, and nonviolent felonies, which include grand larceny.

This is why criminals like this dude could be caught over and over, only to be released like a lake trout on a fishing show. Meanwhile, if you wandered through an open door at the Capitol, you might still be in jail six months later. If only they’d attacked a White House with BLM, those lawbreakers would be home right now.

But in 2022, petty and grand larcenies are up 42 and 51%, respectively, compared to the last same time last year. And in this precinct where Rodriguez did most of his shoplifting, grand larcenies were up 99%. That’s almost double.  Even Janet Yellen could figure that out. Isaac boasted, I may have got caught 46 times, but I got away a lot more than that. He finally got nailed for ripping off a store where there was already an order of protection against him.

And that’s the amazing part, really, that you actually have to get a letter from a court in advance in order for them to stop a criminal. How insane is that? But this is how incentives and disincentives work. The left incentivize criminal behavior with zero deterrence. Criminals reacted exactly as you’d expect.

So can you blame the thieves? Apparently, we’re no longer allowed to. And maybe that’s how it goes. And you wonder what even happens when the cops decide to interrogate these perps.

OFFICER: Okay, Deborah,  I’ll keep this brief. We’ve caught you 35 times stealing this week. [00:05:30][4.0]
DEBORAH: But it wasn’t me, though.
OFFICER] We have you on tape. Look, here’s a picture of you stealing ties from J.C. Penney?
DEBORAH That looks nothing like me.
OFFICER: This looks exactly like you. We also got you on camera. Stealin a monkey hen from the National History Museum.
DEBORAH: would never wear that.
OFFICER: You’re wearing the same thing right now.
DEBORAH: You’re wearing the same thing.
OFFICER: We also caught you stealing a male model from the international house of male models.
DEBORAH: He hit on me.
OFFICER: Now, that’s the biggest lie I ever heard. Do you expect me to believe that?
MALE MODEL: Hey, baby. You ready to get out of here?

They make a beautiful couple.

So, the question is with all this stealing going unarrested – is that a word – why are we paying for things? Are we the suckers or what? In this new world, you’d be stupid not to steal. Like you’d be stupid to pay your student loans back. I mean, how is that not wholesale theft?

It’s the government reaching into your pocket to pay off someone else’s debt. In that case, you’re the drug store, and the government just walked in and cleaned out the register

Automatic Bot - January 29, 2023 0
Ruja Ignatova referred to herself as the Crypto Queen and she’s now back in the spotlight, at least sort of, when news about the...
Go to mobile version