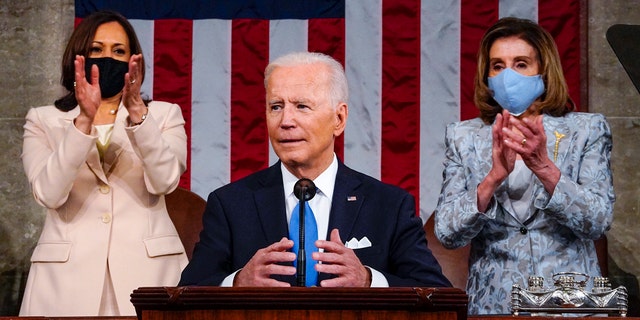 In his Opening Monologue on Tuesday, host Sean Hannity said the top three ranking federal leaders are collectively showing the world that America is weak and feckless, and at the same time are allowing Russian autocrat Vladimir Putin to continue to fund his war machine against Ukraine.

The host questioned Biden’s competence and ability to handle multiple crises, let alone a single major one in Eastern Europe, and again condemned Vice President Kamala Harris’ description of the war as essentially a bigger country invading a smaller one being “bad.”

“Our top three leaders in this country that are elected are completely and totally utterly out to lunch,” he said.

He pointed out that in a major international address, Harris wrongly identified Ukraine as a NATO member, leading to what the host reported was a “stealth edit” of the official transcript.

RUSSIAN PEOPLE HURTING FROM SANCTIONS, BUT THEY MAY BE RALLYING TO PUTIN: RUSSIAN-AMERICAN

“You have the disaster that is the weak, frail, cognitively struggling Joe Biden. Then the disaster and train wreck that is our Vice President, Kamala Harris,” he said, describing both leaders’ foibles and adding that there has not been enough attention on the third-ranking U.S. leader, House Speaker Nancy Pelosi, D-Calif.

Hannity said it is frightening that the 81-year-old is second in line to the presidency, remarking that she is “completely malfunctioning” as a leader.

“If you think option one is bad and option two is bad, option three may be worse,” he said of Pelosi, who has served in office more than 30 years.

“It’s sad to have to state the obvious, but between Nancy Joe and Kamala Harris, this country is not in good and capable hands,” he said.

The third and fourth U.S. leaders in succession are Sen. Patrick Leahy, D-Vermont, and Secretary of State Antony Blinken respectively.

“God help us all. But congratulations – no more mean tweets America – you got what you wanted,” the host concluded.