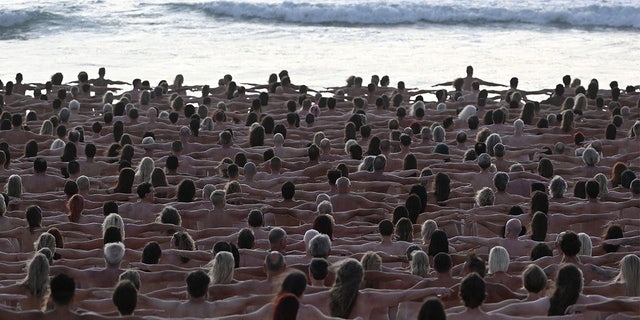 Some 2,500 people took off their clothes on Saturday to pose for U.S. photographic artist Spencer Tunick at Sydney’s Bondi Beach in an effort to raise awareness about skin cancer.

Tunick, known for staging mass nude photo shoots at world landmarks, used a megaphone to direct attendees into several poses on the beach before many took a naked dip in the ocean.

The New York-based artist collaborated with a charity on the naked art installation in a bid to raise awareness about melanoma, Australia’s fourth most common form of cancer.

Australia’s federal government estimates that this year 17,756 new cases of skin cancer will be diagnosed in Australia, and 1,281 Australians will die from the disease.

Participants pose nude during sunrise on Sydney’s Bondi Beach for US art photographer Spencer Tunick, to raise awareness for skin cancer, on November 26, 2022.
(Photo by Saeed Khan/AFP via Getty Images)

Tunick’s Instagram post explained that the participants had gathered in nothing but their skin, “watching the first rays of light creep over the horizon of Bondi Beach, standing with respectful strength, honouring all those who’ve been killed or done battle with our ‘national cancer,’ knowing that we will be the generation to stop it.”

WINGING IT: YOUNG BIRD MAY HAVE SET DISTANCE RECORD BY FLYING NON-STOP FROM ALASKA TO TASMANIA

The photographer expanded on his intentions further in a statement to Fox News Digital.

“Skin cancer is the world’s most common cancer. Every year, over 1.3 million people are diagnosed with it. Killing over 125,000. Sadly, these deaths are predicted to rise by 20% in the next few years, unless we do big brave things to stop it,” he explained. “Hopefully my recent photographs with the inclusion of many skin cancer survivors will remind people of the fragility of life and the importance of skin checks.”

Tunick has also been personally affected by the disease, explaining that a family member recently had precancerous skin removed, catching it in time.

A participant, Robyn Lindner, said she overcame nerves to strip for the shoot, which organizers said involved 2,500 people.

“I was secretly terrified (and) last night I have to confess I was thinking, ‘What have I done?’ But it was great, everyone was a really good vibe, everyone was really respectful and it just felt really fun,” said Lindner.

Tunick last directed a mass shoot in Sydney in 2010, when 5,200 Australians posed naked at the Sydney Opera House.

When asked what his next project is, Tunick explained that he’s trying to find a way to do a mass group nude in Asia.

“Every time a museum in Asia approaches the local government with one of my projects they are turned down. I have been turned down in South Korea, Taiwan and Shanghai, China,” explained Tunick.

He suggested: “Maybe a remote island off the coast of Japan?”

Choose To Be Happy | Joel Osteen