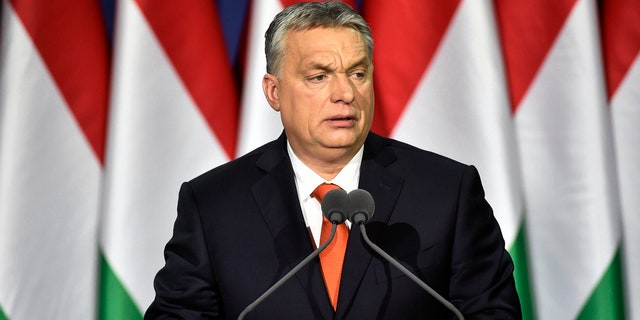 Hungary blocked the approval of an 18 billion euro financial aid package for Ukraine, prompting accusations from other European Union members that Prime Minister Viktor Orban is abusing his veto power.

The package, worth roughly $18.9 billion, would have provided funds for Ukraine to maintain its staunch defense in the face of invasion from Russia. Orban’s vote forces the other European nations to find alternative means of continuing to support Ukraine.

The European Union decided to withhold $7.5 billion in funding to Hungary over concerns of fraud and corruption. Critics of Orban believe he blocked the proposed Ukraine funds in order to pressure the rest of the bloc to release the funds.

The E.U. requires unanimity to send Ukraine money through the bloc’s channels, but individual nations are also able to do so on their own, although it is more complicated to coordinate the effort.

“Viktor Orban is abusing the veto like no one before him. … He even takes funds for Ukrainian hospitals hostage for this,” said Daniel Freund, a member of the Green party and a parliamentary negotiator on the rule of law issue. “Viktor Orban could not have given Putin a nicer present today.”

Viktor Orban has been prime minister of Hungary since 2010.
(Zoltan Mathe/MTI via AP)

But Freund insisted that “the EU will find ways to support Ukraine even without Hungary. But that means: more time, more effort, more costs.”

FINLAND MUST LIFT ARMS EMBARGO ON TURKEY IN ORDER TO JOIN NATO, ACCORDING TO TURKISH FOREIGN MINISTER

Orban denied that his veto had anything to do with the dispute over funds and instead was a statement about how the E.U. should operate, saying that reports of a veto were “fake news. Hungary is ready to give financial assistance to Ukraine, on a bilateral basis.”

He insisted that the method proposed by the bloc to deliver aid “is not the solution.”

“If we continue to go down the road towards a debt community, we will not be able to turn back,” he added without elaboration.

Czech Finance Minister Zbyněk Stanjura told reporters, “Whether it is Plan A or Plan B, at whatever price,” Europe must ensure money reaches Ukraine at the beginning of January.