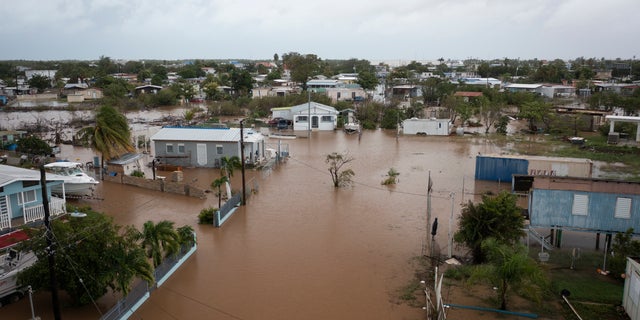 Hurricane Fiona was upgraded to Category 3 on Tuesday as it nears the Turks and Caicos Islands, according to the National Hurricane Center.

The storm was centered 80 miles southeast of Grand Turk Island Monday night and had maximum sustained winds of 110 mph. It was moving 10 mph north-northwest.

The hurricane delivered heavy rain over the Dominican Republic and Puerto Rico. A 58-year-old man died in the U.S. territory after he was swept away by a river in the central mountain town of Comerio, police said.

The National Guard has rescued more than 900 people amid floodwaters flowing through towns in eastern and southern Puerto Rico, where up to 30 inches of rain is forecast for some areas.

Streets are flooded on Salinas Beach after the passing of Hurricane Fiona in Salinas, Puerto Rico, Monday, Sept. 19, 2022.

At least 1,300 people and about 250 pets remain in shelters across Puerto Rico.

Residents of the island experienced a blackout when the storm struck Puerto Rico’s southwest corner on Sunday. But by Monday night, authorities said power had been restored for more than 114,000 customers.

Puerto Rico Gov. Pedro Pierluisi said it could be days before everyone on the island has electricity again.

Puerto Rico Gov. Pedro Pierluisi said it could be days before everyone on the island has electricity again.

More than 837,000 customers had their water service cut because of turbid water at filtration plants or lack of power, according to authorities.

Fiona was on a path toward the Turks and Caicos islands on Tuesday.

Authorities in the Dominican Republic reported that a man died after he was hit by a falling tree. The storm displaced more than 12,400 people and cut off at least two communities in the country.

Residents replace a home’s roof that was torn off by Hurricane Fiona in the low-income neighborhood of Kosovo in Veron de Punta Cana, Dominican Republic, Monday, Sept. 19, 2022.

The hurricane left several Dominican highways blocked, a tourist pier in the town of Miches was badly damaged by high waves and at least four international airports were closed.