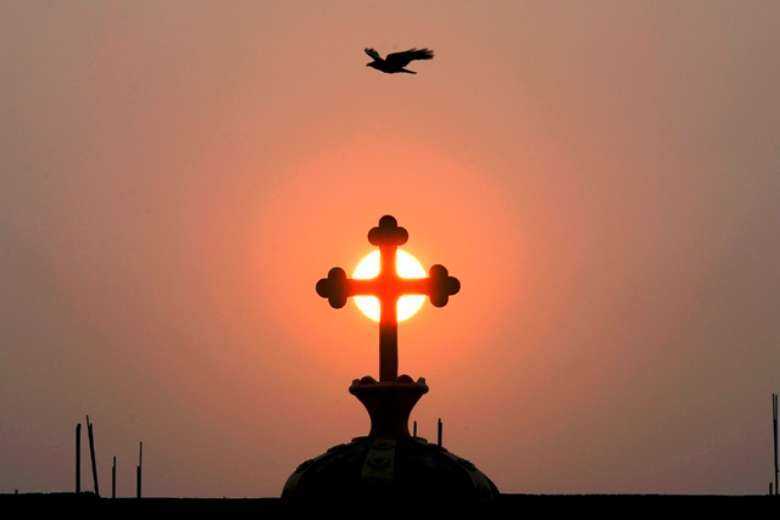 A bird flies over a Christian cross silhouetted against the rising sun on top of a church on the outskirts of Hyderabad, India, on March 12. (Photo: AFP)

The Catholic Church in the southern Indian state of Karnataka has criticized the government for its attempts to keep the pot boiling on the contentious issue of religious conversions.

The May 12 announcement by Law Minister J.C. Madhuswamy of the state government’s plan to usher in an emergency law to counter religious conversions and interfaith marriages by issuing an ordinance has alarmed Christians.

The state’s legislative assembly passed an anti-conversion bill — Karnataka Right to Freedom of Religion Bill 2021 — last December but failed to present it in the upper house or legislative council for final sanction, perhaps because the ruling Bharatiya Janata Party (BJP) is one seat short of a majority there.

An ordinance comes into effect with the signature and seal of the state’s governor but has to be ratified by the elected legislative house within six months.

“The pro-Hindu BJP wants to keep alive the bogey of conversions ahead of the crucial elections,” said J.A. Kanthraj, public relations officer of Bangalore Archdiocese, while referring to the local polls to be held in a couple of months followed by provincial assembly elections next year in the state.

Kanthraj said the state government may be taking the ordinance route to reintroduce the law by the back door “as its own members are not in favor of it.”

“There is no doubt that some fringe elements and groups will try to create problems for the members of our community, as we have seen in the past, as the government is in no control of them”

Archbishop Peter Machado has strongly opposed the anti-conversion law, calling it a major threat to Christians, who comprise less than 2 percent of the state’s 64 million people, a majority of whom are Hindus.

“We cannot understand what is in the mind of the government. There is no doubt that some fringe elements and groups will try to create problems for the members of our community, as we have seen in the past, as the government is in no control of them,” he said.

He appealed to the state’s governor not to give his assent to an ordinance, which he said would disturb the harmonious relationship between religious communities such as Hindus, Muslims and Christians.

Madhuswamy said the government decided on issuing an ordinance because “there is no clarity on when the legislative council will meet again. The ordinance will be in place until the [anti-conversion] bill is placed in the council, whenever it meets again.”

He conceded that the BJP was one seat short of a majority in the state’s 75-member upper house.

“It expects to gain a majority by the first week of June when elections are due for seven seats that fell vacant in the interim,” Kanthraj told UCA News on May 13.

The state is facing civic polls in June, considered a warm-up for state elections due in June 2023 when the BJP plans to consolidate its electoral position across the state.

The BJP, which projects itself as the champion of Hindu causes, has been spearheading hate campaigns against Christians and Muslims in Karnataka.

Archbishop Machado has repeatedly countered the government’s claims of large-scale religious conversions, saying they were not based on facts or reliable data.

Biden signs $40B Ukraine aid bill that was flown to