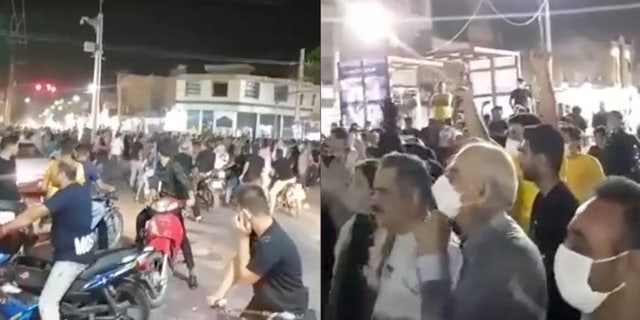 Protests in Iran continued Monday as more Iranians took the streets to show their disdain for the regime in Tehran. Over the weekend reports said up to five people were killed following a crackdown by authorities. A semi-official government news agency put the number of dead from the protests at one according to the Associated Press.

The protests began last week when the government slashed food subsidies on eggs, milk, chicken, and cooking oil leading to price rises of some 300%.  Since then, protests have spread to many areas of the country and according to observers have taken on a much more anti-government current.

Protesters, showing no fear of retribution by the state security services have been heard shouting, “Death to Khamenei! Death to Raisi!” referring to Iranian President Ebrahim Raisi, who has promised to create jobs, lift sanctions, and rescue the economy.

Taking to Twitter on Sunday, State Department spokesman Ned Price tweeted out a message to the protesters

His tweet stated: “Brave Iranian protestors are standing up for their rights. The Iranian people have a right to hold their government accountable. We support their rights to peaceful assembly and freedom of expression online and offline – without fear of violence and reprisal.”

Before Price’s tweet was released, some users with the hashtag #IranProtests2022 had complained that the Farsi language Twitter account for the State department was promoting an exercise video.

Behnam Ben Taleblu, a senior fellow at The Foundation for Defense of Democracies (FDD) told Fox News Digital that “The million-dollar question for the Biden administration is: does it ever plan to act on its professed support for Iranian protestors?”

He noted that there were several ways to do that including the designation of officials who support, or are engaged, in the crackdowns, “Or at the very least, cutting off nuclear talks and announcing an end to its quest to resurrect a deal that empowers the worst of the worst at the expense of the Iranian people.”

The Foreign Desk website reported that in addition to the five deaths there were dozens of arrests. Citing Iranians who were protesting the message was clear.

One woman from Tehran and who spoke on the condition of anonymity to the Foreign Desk said, “People have become more courageous than ever, and maybe it’s because they’ve hit absolute rock bottom. They feel they have nothing to lose.”

It also quoted Jamshad from Shiraz who called on the U.S. to do more. “We need help. The U.S. and central media sources know their power. They are the ones who must help us.” Jamshad, who withheld his last name due to security reasons, continued, “The West is only focused on the Iran deal. When it comes to Iran, they forget about us. They forget about human rights,” he said.

Also weighing in on the protests Monday was former U.S. Secretary of State Michael Pompeo, who was on a visit to an Iranian opposition group in Albania.

Pompeo was secretary of state under President Trump when the U.S. left the Iran nuclear deal. He was also instrumental in placing the Iranian Revolutionary Guard Corps (IRGC) as a Foreign Terrorist Organization (FTO.) In March Fox News reported that the Biden administration was considering a move to take the IRGC off the terror list as part of the ongoing negotiations to rejoin the nuclear deal.

During his speech to the MEK, an Iranian opposition group, Pompeo said that Iranian president Ebrahim Raisi was failing the people of Iran.

“You should know Raisi has already failed. He has failed to crush the uprisings in Iran or break the noble spirit of decency within the Iranian people and the resistance is part of making that happen.”

During his visit to the organization’s headquarters known as Ashraf 3, Pompeo met with its leader Maryam Rajavi where the two discussed the situation in Iran.

An Urgent Prophetic Dream Given to Jennifer LeClaire

The Lost World of Statesmanship