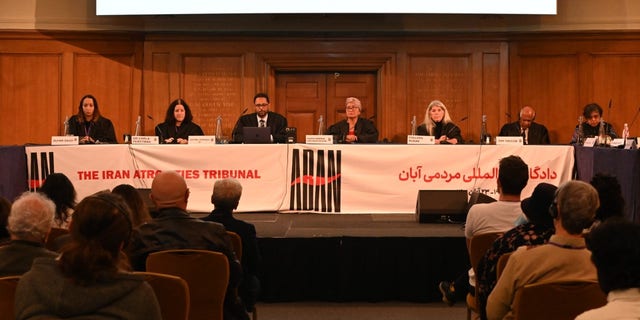 As the Biden administration is busying itself in Austria where it’s desperately seeking to conclude a nuclear agreement with Iran, critics complain human rights are off the table.

This as prominent Iranian dissidents and lawyers are trying to jolt the international community into holding Iran’s regime accountable for its mass execution of peaceful protesters in 2019.

The Iran Atrocities Tribunal — also known as the Aban Tribunal for the Iranian calendar month in which the elimination of regime opponents took place — has been meeting in London and is slated to issue a report later in the year on the 1,500 protesters murdered by Iranian security forces in November 2019 for demonstrating against rising fuel prices.

Shadi Sadr, a prominent Iranian lawyer and executive director of the group Justice for Iran, is one of the driving forces behind the establishment of the tribunal. She told Fox News Digital the “international community is indifferent to the atrocities,” and Iran’s clerical regime has not investigated the crimes.

IRANIAN FORCES MAY HAVE KILLED MORE THAN 1,000 IN RECENT PROTESTS, OFFICIAL SAYS

“Absolute impunity” is the controlling factor in the Islamic Republic’s opaque system, and the perpetrators of the mass murder have been promoted, Sadr said.

Sadr noted the popular interest in the Tribunal.

“More than 15 million viewers in Iran watched the live broadcasts of the [Aban Tribunal] hearings as they were covered by major Iranian media outlets in exile. It became the most watched event in Iran’s history of civil activism,” Sadr said.

Iran’s president, Ebrahim Raisi, who at the time of the executions was the head of Iran’s judiciary, refused to investigate the shootings of the protesters. Raisi oversaw a harsh legal system that arrested 7,000 people during the mass demonstrations after which protesters were tortured and given excessive prison sentences.

The U.S. sanctioned Raisi for his role in the 2019 violent crackdown on dissent and for his complicity in an earlier mass murder of 5,000 Iranian political prisoners in 1988. Many of those killed were members of an opposition group known as the MEK.

“According to evidence gathered by counsel, 160 [people] stand accused of crimes against humanity, including murder, torture and rape,” Sadr said of the 2019 protests. “Among them, Supreme Leader Ali Khamenei, current president Ebrahim Raisi and former president Hassan Rouhani.”

In this Dec. 30, 2017, file photo, taken by an individual not employed by the Associated Press and obtained by the AP outside Iran, a university student attends a protest inside Tehran University while a smoke grenade is thrown by anti-riot Iranian police, in Tehran, Iran.
(AP)

In one witness video reviewed by Fox News Digital, a witness from the city of Shiraz delivered an account of his peaceful protest and injuries during the demonstration and arrest.

“They shot at us from two-meter distance. I was shot in the neck, in the waist and in the leg,” he said. The security forces beat us during our (detention).” There were 13-year-old and 14-year-old adolescents among those arrested, the witness said.

“The officers were touching the private parts of the body of those children … They were sexually abusing these children, and we witnessed that.”

In a startling revelation, that witness said the director of Shiraz’s central detention center, who interrogated the executed champion wrestler Navid Afkari, delivered a violent rant to the incarcerated protestors.

After Fox News Digital published a story on Afkari in September 2020, President Trump tweeted the Fox News Digital article, turning the wrestler’s case into an international cause célèbre. Navid Afkari, a young wrestler who was imprisoned and tortured following his role in a peaceful protest in 2018, was eventually executed by the regime.

Iranians in Canada on Mel Lastman Square demonstrate against the execution of wrestler Navid Afkari by the Iranian regime, in Toronto, Ontario, Sept. 15, 2020.
(Sayed Najafizada/NurPhoto via Getty Images)

“The person who interrogated Navid Afkari was the head of the central detention center, by the name of Mirzaei,” the witness said. “He came to our ward at the detention center and gave a speech, saying how we’d set fire to the city. He said he had been to many places — Iraq, Palestine, Lebanon.

“He said he would drive around at night with a gun, hoping that someone would bother him, and he would kill them, no problem. He was talking to the crowd bluntly, giving his speech. He was saying these things.”

The tribunal conducted hundreds of interviews, including with high-level government officials and a commander of the Islamic Revolutionary Guard Corps.

According to the Aban Tribunal website, the “judgments of the these tribunals provide reliable facts and evidence that can be used to urge official international organizations or governments to take action and create a historical ‘evidence base’ record (where no other may ever exist) of the criminality of horrifying events.”

Iranian officials have lashed out at the tribunal. Hassan Norouzi, a member of Iran’s parliament and a spokesman for its judicial committee, boasted about his role in murdering protestors in 2019.

“I was one of the people who shot at the protestors. We killed them,” IranWire reported him saying last year.

Sadr told Fox News Digital, “At the hearings the next day, the tribunal counsel announced that the official [Norouzi] would be added to the list of 133 accused, as identified for their indictment, for his incriminating words.”

In 2009, security forces arrested Sadr for protesting the alleged fraudulent re-election of Mahmoud Ahmadinejad as president. She was locked up in the notoriously brutal Evan prison in Tehran.

In 2010, Iran’s regime sentenced Sadr, a women’s rights activist, in absentia to six years in prison and 74 lashes for her 2007 protest outside a revolutionary court, where four feminists were on trial. She was also an energetic campaigner in Iran to abolish the regime’s penalty of stoning adulterers to death.

Sadr said one of the “most important reactions came up after the second hearing in February, and in my analysis, mostly due the damaging content of the testimony of Witness 600, who was a high-ranking IRGC officer.”

The U.S. government classified the IRGC as a foreign terrorist entity for its role in the murder of over 600 American military personnel in the Middle East.

“Iran has witnessed six mass popular uprisings against the Khamenei dictatorship in the past five years, yet the Biden administration and JCPOA [the Joint Comprehensive Plan of Action or Iran nuclear deal] proponents have chosen to ignore them,” Alireza Nader, a scholar of Iranian affairs, told Fox News Digital.

“The Iranian people are struggling every day to rid themselves of Khamenei’s tyranny and create a secular democracy. The only way to resolve the nuclear crisis is a complete change of the political system in Iran. Instead of pointless negotiations with the regime, the Biden administration should maximize its support for the Iranian people in their struggle for freedom.”