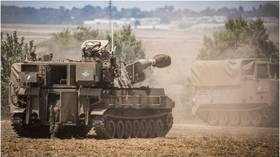 The death toll in the Gaza Strip amid Israel’s ongoing ‘Operation Breaking Dawn’ has grown to 24, including six children, with over 200 people wounded as of Saturday night, according to Palestinian health officials. The Israeli military accuses the Palestinian Islamic Jihad (PIJ) militants of using civilians as “human shields” and killing own people in botched rocket attacks.

The Israel Defense Forces (IDF) confirmed striking multiple “terrorist targets” across the Gaza Strip on Saturday, but denied any responsibility for a deadly blast in Jabalia refugee camp in the north of the enclave that reportedly killed at least six people, including three children.

“Following the reports of the tragic events in Jabaliya, the IDF concluded an in-depth debrief. Based on all the IDF systems data, it appears that this event is the outcome of an Islamic Jihad rocket misfire,” the IDF said in a tweet on Saturday night, adding it “did not conduct any activities in Jabaliya at the time of the event.”

The Israeli military said their radar data can “prove beyond any doubt that this is not an Israeli attack.” A video of the alleged failed launch circulated on social media and was aired by Israeli TV stations, but its authenticity could not be immediately confirmed.


The flare-up of tensions began on Monday, after Israel arrested the Islamic Jihad’s West Bank leader, Bassem Saadi, with a Palestinian teenager killed during the raid. Amid an outcry among Palestinians, the PIJ threatened retaliation and placed its fighters in Gaza on high alert.

On Friday, the IDF launched a military operation, dubbed ‘Breaking Dawn’, citing an “imminent threat of attack against Israeli civilians posed by the Islamic Jihad terrorist organization.” The first strikes killed a senior PIJ commander, Taysir al-Jabari, while an additional 10-20 PIJ operatives were allegedly targeted with missiles and artillery.

In retaliation, PIJ militants launched multiple volleys of rockets at Israel, over 350 in total since Friday, according to the Times of Israel. The IDF says at least 90 of these projectiles veered off-course or fell short within the Gaza Strip, while nearly 95% of the rest were intercepted mid-air by the Iron Dome missile defense systems.


Gaza’s health ministry said the hostilities claimed 24 lives so far, including six children and two women. There were no reports of casualties on the Israeli side.

The IDF vowed to continue the military operation until its objectives are reached, saying on Saturday they are prepared for a “week of fighting,” and that there are no peace talks at the moment.

“The State of Israel is working to defend its citizens and that we will operate decisively and with as great precision as possible against terror operatives and infrastructure,” Defense Minister Benny Gantz tweeted.