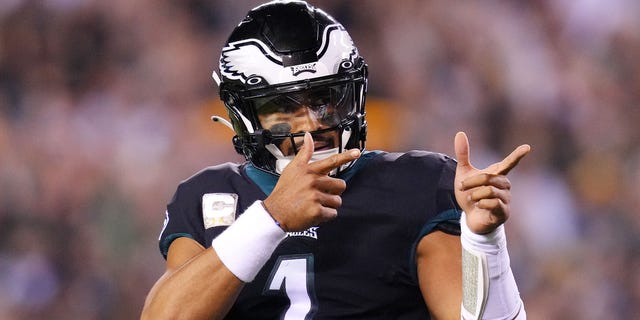 Jalen Hurts broke the Philadelphia Eagles’ franchise record for the most rushing yards by a quarterback in a single game, as his squad became the first NFL team to reach double-digit wins in a 40-33 victory over the Green Bay Packers.

Michael Vick held the single game record with 130 rushing yards, but Hurts quickly put himself in position to break that when he rushed for 102 yards in the first quarter.

It resulted in quick points, too, as the Eagles got off to an early 13-0 lead. Kenneth Gainwell punched it into the end zone for the first score of the game, and after Aaron Rodgers threw his first interception of the contest, Miles Sanders rushed his way in for his first of two touchdowns.

Jalen Hurts #1 of the Philadelphia Eagles celebrates after a 4-yard rushing touchdown by Kenneth Gainwell #14 (not pictured) during the first quarter against the Green Bay Packers at Lincoln Financial Field on November 27, 2022 in Philadelphia, Pennsylvania.
(Mitchell Leff/Getty Images)

Hurts would finish the first half with 126 yards on 10 carries, but the record-breaking rush came on the Eagles’ second drive of the second drive, when he ran for six yards for 136 on the night.

He would follow that up with a nine-yard scramble to add on to his eventual total of 157 yards on 17 carries for the record.

It was a high-scoring first half, though, as the Packers were matching the Eagles’ offensive prowess and ability to create turnovers. Rodgers let his running backs, Aaron Jones and A.J. Dillon go to work on their second drive, and Dillon would eventually find a hole for a 20-yard score to make it 13-7.

Then, after a turnover on downs, the Packers capitalized with an 11-yard strike from Rodgers to Randall Cobb to take the lead, 14-13. Rodgers ended up finding Jones on a 23-yard pass into the back of the end zone to tie the game at 20 apiece after the Packers were able to make A.J. Brown fumble in their own territory.

It was a wild first half, but the second half is where the real story for the Packers began as Rodgers was dealing with an apparent rib injury following an Eagles sack that eventually knocked him out of the game.

Aaron Rodgers #12 of the Green Bay Packers is sacked by Brandon Graham #55 of the Philadelphia Eagles during the third quarter at Lincoln Financial Field on November 27, 2022 in Philadelphia, Pennsylvania.
(Mitchell Leff/Getty Images)

Coming into the contest, Rodgers’ thumb, which he admitted had been broken since Week 5, was a question mark. And after an interception on a wobbly pass to start the game, those questions continued until he settled in.

But the back-to-back NFL MVP seemed hurt even more with his rib injury, as he was wincing in pain on each throw he made as the Packers charged down the field on their second drive of the second half.

As the Eagles began the fourth quarter with the ball, Rodgers jogged to the locker room with trainers to get his injury looked at. And the results weren’t good, as he went back to the sideline with no pads or jersey on. He finished the night 11 of 16 for 140 yards with two passing touchdowns and two interceptions.

Jordan Love, Rodgers’ backup since he was drafted in the first round of the 2020 NFL Draft, entered the game. He immediately made his presence known, finding Christian Watson on a bullet in the middle of the field, which he took 63 yards for a touchdown to make it 37-30 Eagles. It was Love’s first touchdown pass since Week 18 of the 2021 season.

A.J. Brown #11 of the Philadelphia Eagles celebrates with Jalen Hurts #1 after a 6-yard touchdown pass during the third quarter against the Green Bay Packers at Lincoln Financial Field on November 27, 2022 in Philadelphia, Pennsylvania.
(Mitchell Leff/Getty Images)

The Eagles, though, rushed their way down the field and Pro Bowl kicker Jake Elliott drove through a 54-yard field goal to give Philly a 10-point lead.

Love and the Packers would get a field goal to bring the score within a touchdown, but Mason Crosby’s onside kick went the Eagles’ way and they rushed it with Sanders to ice the win.

Love was solid in the quarter, going 6 of 9 on the night for 113 yards and the touchdown pass.

DeVonta Smith was the leading receiver for the Eagles with 50 yards on four receptions, while Brown had a touchdown and 46 yards through the air. Quez Watkins also hauled in a 30-yard pass from Hurts just before halftime for a touchdown.

And it wasn’t just Hurts rushing for over 100 yards, as Sanders had 143 yards on 21 carries to aid in Philly’s 363 yards rushing as a team on the night.

For the Packers, Watson would finish with 110 yards on four receptions as his recent weeks continue to show promise. Dillon was their leading rusher with 64 yards on eight carries.

Jalen Hurts #1 of the Philadelphia Eagles reacts in the end zone prior to the game against the Green Bay Packers at Lincoln Financial Field on November 27, 2022 in Philadelphia, Pennsylvania.
(Mitchell Leff/Getty Images)

The Eagles will welcome the Tennessee Titans next week as they look to pile on more wins as the NFC’s top seed, while the Packers, at 4-8, may think their quarterback situation over with playoff hopes dwindling.

Scott Thompson is a sports writer for Fox News Digital.