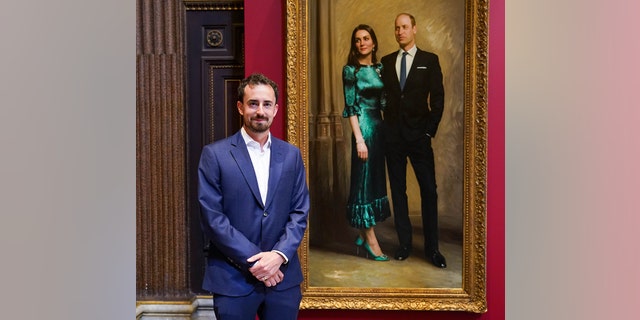 Kate Middleton and her husband Prince William are starring in their first official joint portrait.

The pair, both 40, visited the University of Cambridge’s Fitzwilliam Museum, where they viewed the artwork. The piece was commissioned in 2021 by the Cambridgeshire Royal Portrait Fund, which is held by the Cambridge Community Foundation, as a gift to Cambridgeshire. It was painted by award-winning British portrait artist Jamie Coreth.

Artist Jamie Coreth at Fitzwilliam Museum, where the Duke and Duchess of Cambridge viewed his portrait of them during an official visit to Cambridgeshire on June 23, 2022.
(Paul Edwards – WPA Pool/Getty Images)

According to the Fine Art Commissions, the public can see the portrait at the Fitzwilliam Museum for three years. The artwork will then be exhibited in other community spaces and galleries around Cambridgeshire.

The portrait shows Middleton wearing a metallic emerald dress by The Vampire’s Wife, which she wore during the couple’s visit to Dublin in March 2020. William sported a dark suit and a blue tie.

“It has been the most extraordinary privilege of my life to be chosen to paint this picture,” said Coreth in a statement. “I wanted to show Their Royal Highnesses in a manner where they appeared both relaxed and approachable, as well as elegant and dignified.”

“As it is the first portrait to depict them together, and specifically during their time as The Duke and Duchess of Cambridge, I wanted the image to evoke a feeling of balance between their public and private lives,” he shared. “The piece was commissioned as a gift for the people of Cambridgeshire, and I hope they will enjoy it as much as I have enjoyed creating it.”

It was reported that the couple met with supporters of the project, including Coreth. They also met with Lady Sibyl Marshall, the wife of the late Sir Michael Marshall, who originally proposed the idea of the portrait.

William, who celebrated his birthday on Tuesday, is second in line to the throne after his father Prince Charles. He and Middleton share three children: Prince George, Princess Charlotte and Prince Louis.

Catherine, Duchess of Cambridge and Prince William arrive at the Guinness Storehouse’s Gravity Bar during their visit to Ireland on March 3, 2020, in Dublin.
(Samir Hussein/WireImage)

Slowed by age and health problems, the 96-year-old queen is gradually handing over more responsibilities to Charles, 73. That in turn gives William, his eldest son, a more important role to play and more opportunities to put the stamp on a new generation of the monarchy.

Think you know the story of Noah..YOU DON’T KNOW JACK!