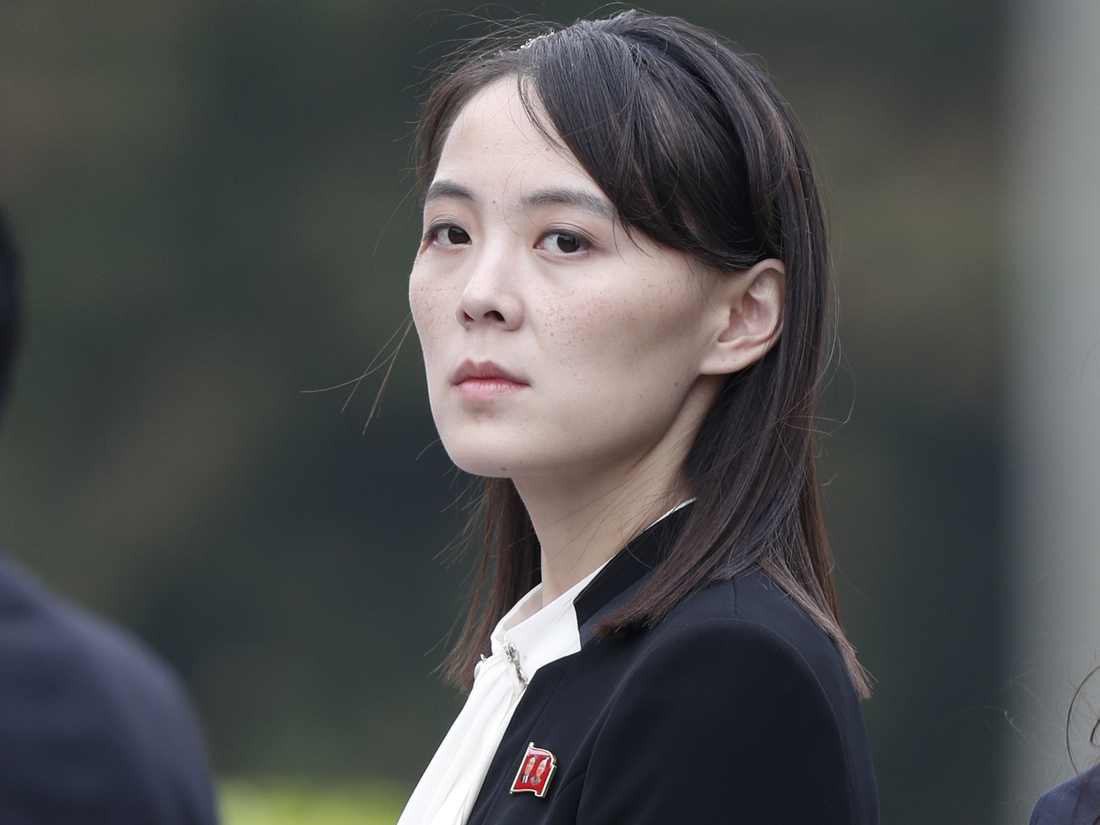 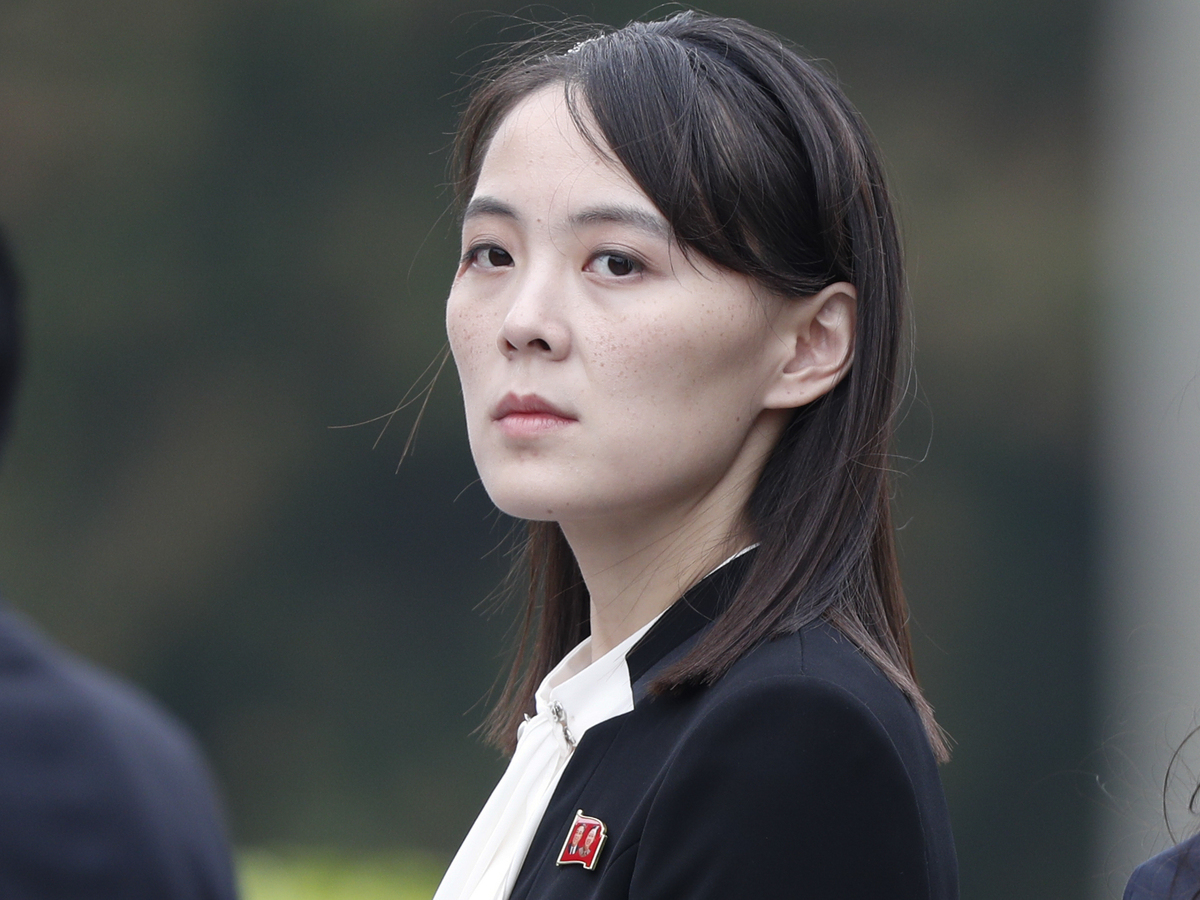 While government-organized demonstrations are not unusual in the North, one notable feature of these rallies is that they echo the harsh rhetoric of Kim Jong Un’s sister, Kim Yo Jong. She is believed to be 32 and apparently in charge of the campaign against the defectors and their leaflets.

Kim Yo Jong is the first vice director of the Central Committee of the Workers’ Party of Korea.

Her political star has risen steadily since her brother took power in 2011, leading to speculation that she could one day become the country’s first female ruler. But while there are plausible reasons for her recent elevation, analysts say, the traditional patriarchal nature of North Korean society will likely prevent her from advancing higher up the ranks.

“She’s gone from being her brother’s proxy to his protocol assistant, to his eyes and ears, to a punisher,” comments Kim Seung-chul, a defector who runs the Seoul-based North Korea Reform Radio, which broadcasts news into the North. 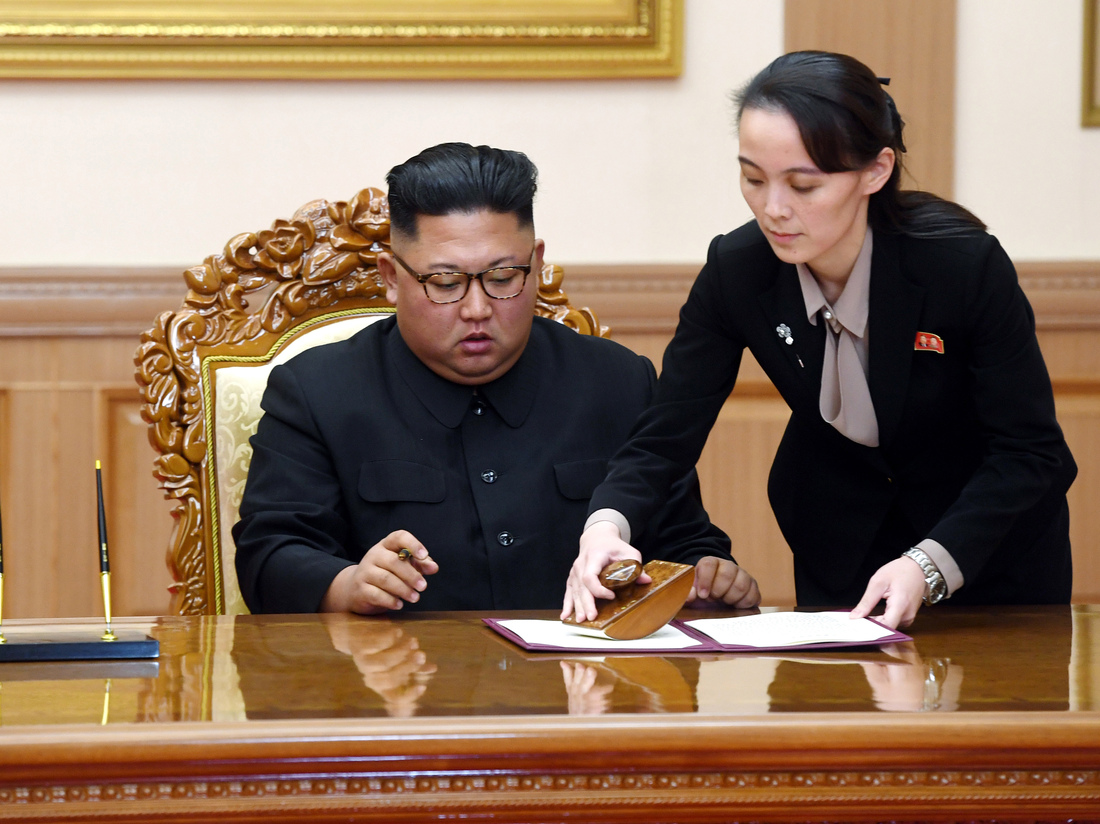 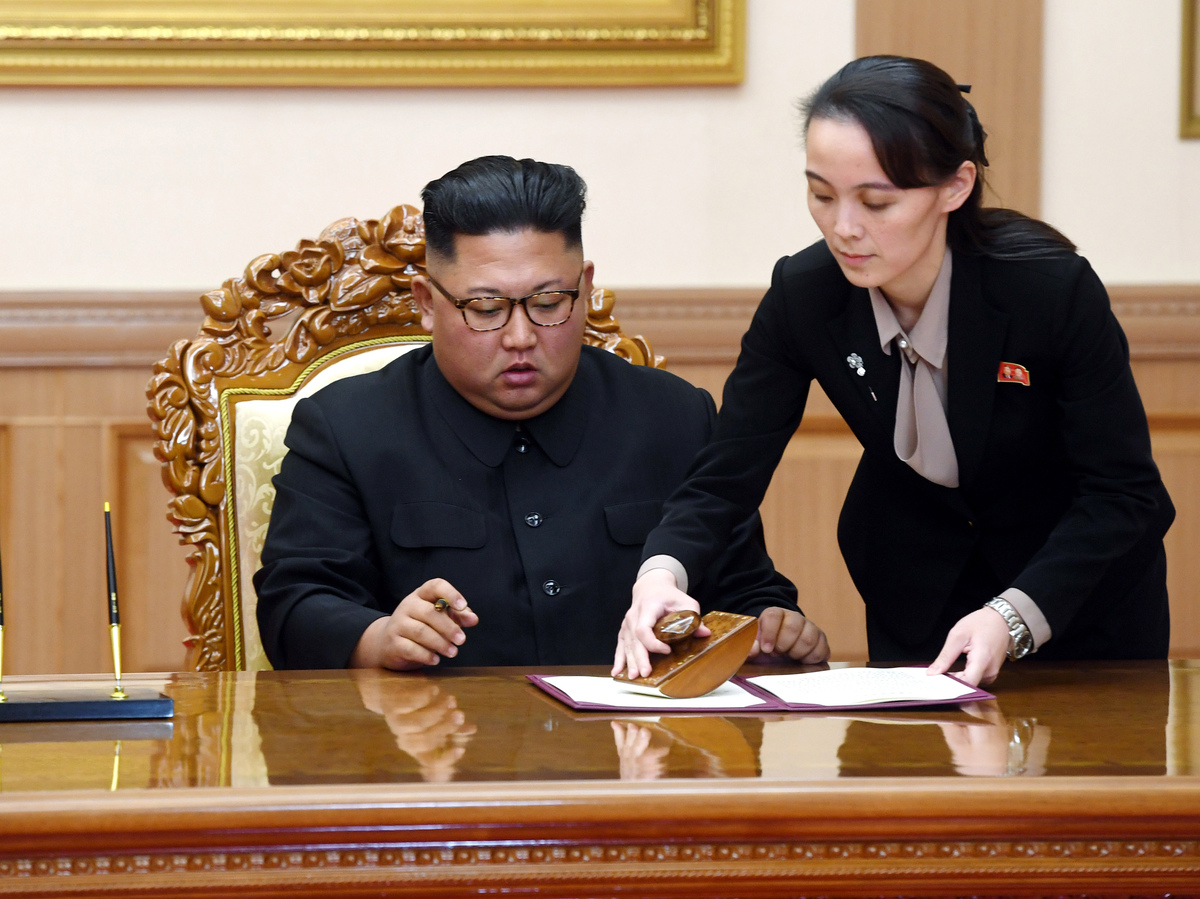 Kim Yo Jong was still in her 20s in 2011 when her father, Kim Jong Il, died and her brother took power.

Her debut on the international stage came in 2018, when she acted as a special envoy at the Winter Olympics in Pyeongchang, South Korea, and met with the country’s president, Moon Jae-in.

In her most recent statement this month, she showed she remains involved in relations with the United States. She voiced doubt about another summit between Kim Jong Un and President Trump this year. But she left the door open to talks and insisted “we do not have the slightest intention to pose a threat to the U.S.”

Her rhetoric has recently grown harsher. In a statement last month, she threatened to destroy an inter-Korean liaison office in Kaesong, North Korea — a symbol of ties with the South. Days later, the building was blown up.

In another statement, she assailed North Korean defectors as “human scum little short of wild animals who betrayed their own homeland.” She described President Moon as an “insane” man who put his neck in “the noose of the pro-U.S. flunkyism.”

Such language suggests that while her political status may have been upgraded, her political acumen and maturity have not, says Kim Seung-chul.

He also argues that Kim Yo Jong’s efforts to dismantle warmer ties with Seoul cannot have been very popular at home. Some North Korean elites, he says, had hopes that the détente would bring in badly needed South Korean investment and lead to better ties with Washington and an easing of sanctions.

“To those in North Korea who still had a positive attitude toward cooperating with South Korea, [Kim Yo Jong’s actions] are a huge disappointment,” Kim Seung-chul says.

But the younger sister’s rise to what many now see as the de facto No. 2 position in the Kim regime has historical precedent and political logic behind it.

“There is nothing unusual about, say, a sibling of the current leader to be his second in command. It’s actually a very well-established tradition of the Kim family,” says professor Andrei Lankov, a North Korea expert at Kookmin University in Seoul. He notes that the current leader’s father Kim Jong Il was assisted by his sister during his rule in the 1990s.

Kim Yo Jong’s new role was necessitated by her brother’s disappearance this spring, Lankov says, apparently due to an unknown illness. By one estimate, Kim has made only seven public appearances from April through June, compared to 46 in the same period last year. 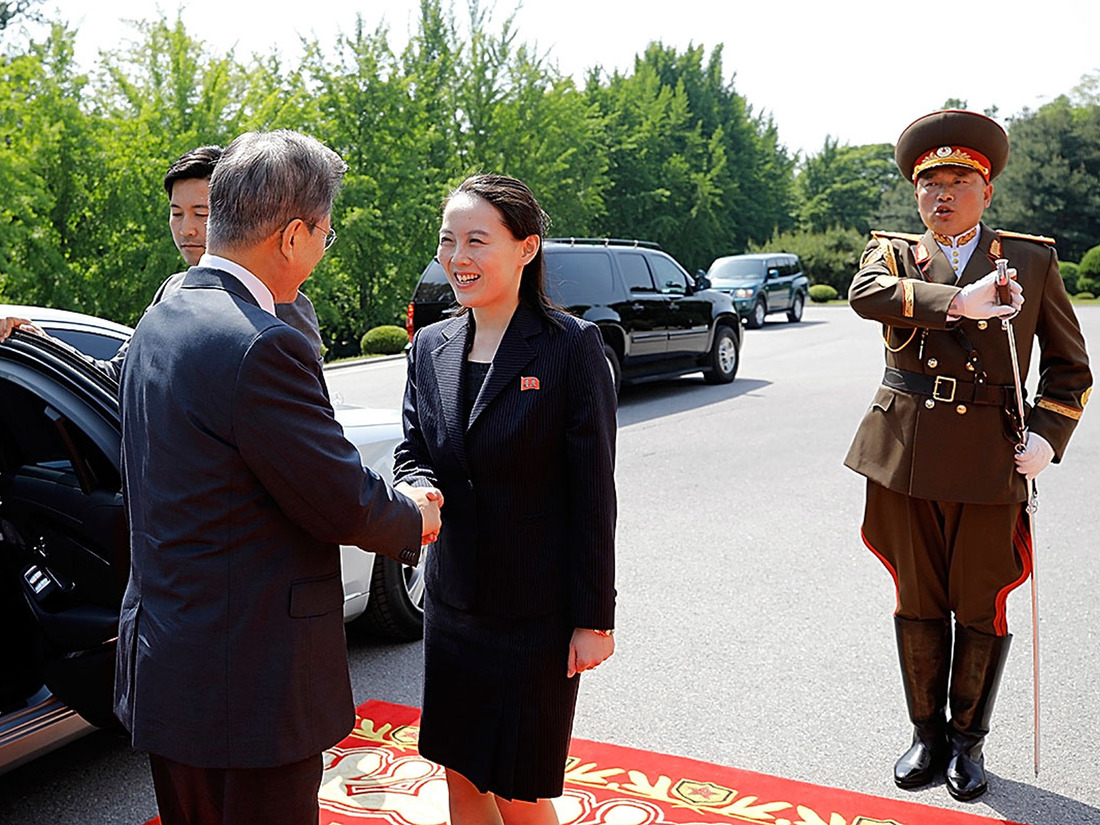 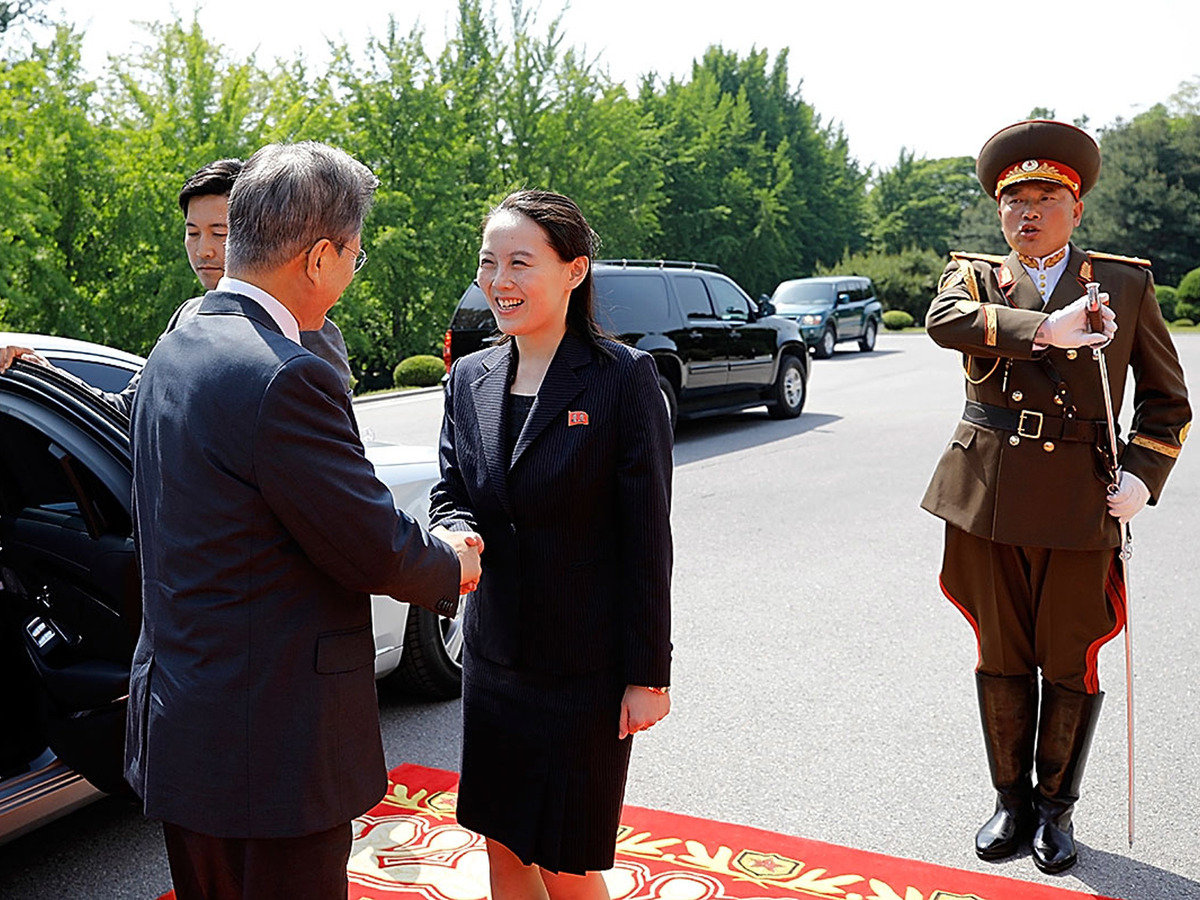 “This makes it more necessary for him to have a trusted deputy,” Lankov says. “And this person has to come from, if you like, the royal family, and in the ruling clan, they have now a shortage of adults.”

The ruling Kim clan is known in North Korea as the “Mount Paektu bloodline,” a reference to the mountain on the country’s border with China where North Korea claims Kim Jong Il was born and his father fought the Japanese.

“In many regards, North Korea is similar to the European societies of late medieval and early modern days. It is essentially a monarchy,” Lankov says, in which family members are more trusted than other elites.

That bloodline, is what allows Kim Yo Jong to rise so high in North Korean politics, despite a bias against women in power, where traditional attitudes are summed up in the Korean maxim, “if the hen cries, the household will be ruined.” The saying, used in both Koreas, suggests that when women speak up or take charge, no good will come of it.

“The North Korean system is fundamentally patriarchal,” says Lim Soon-hee, an expert on women in North Korea, now retired from the Korea Institute of National Unification, a government think tank in Seoul.

“The government tells the people that they form one big socialist family,” she adds. The father of this metaphorical family, she explains, is Kim Jong Un. The mother is the ruling Workers’ Party. The children are the North Korean people. And the father’s authority is unchallenged.

North Korea, she points out, went from being part of the 1392-1910 Choson Dynasty, to a colony of the Japanese empire from 1910-1945, to a dictatorship. Although its socialist rhetoric upholds equality of the sexes, the North, unlike the South, never had a strong civil society or government agencies designed to improve women’s place in society.

As a result, “the social atmosphere is that women are inferior to men. Women themselves would never dare to compare themselves to men,” she says.

This is why she believes Kim Yo Jong’s most likely future role is not that of successor, but instead, a regent or caretaker, until the leader’s son is old enough to take over. Lim says Kim Jong Un reportedly has three small children, who are too young to rule.

Even if Kim Yo Jong were to take power, Lim argues, North Korea’s conservative military would never accept it.

“Kim Yo Jong herself would not hope to be a successor, although she may have a strong will to acquire greater practical power,” Lim concludes. “She is smart enough to know that it wouldn’t be easy for a woman.”

Se Eun Gong and Ha-Kyung Kim contributed to this story in Seoul.