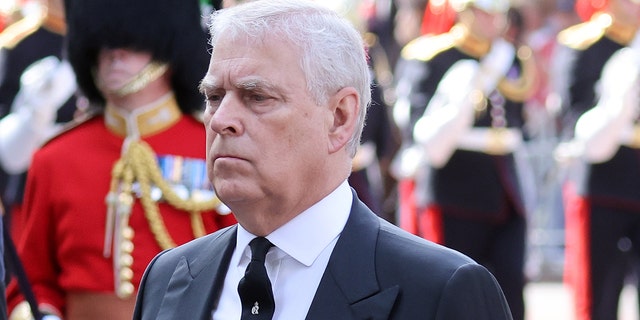 Much has been said about Prince Andrew’s involvement in Queen Elizabeth’s funeral proceedings – but his future is clear to one royal filmmaker.

“For Prince Andrew, his life as a working royal is well and truly over,” True Royalty TV co-founder Nick Bullen told Fox News Digital. “We won’t be seeing very much more of him in the coming weeks and months. I don’t believe that he is a part of the king’s plan for the future of the monarchy. The king has been very clear in saying that he wants a slimmed-down monarchy. He’s focusing on immediate heirs. Having [his grandchildren] Prince George and Princess Charlotte as part of the funeral was a very clear message – this is the future.”

Bullen is an award-winning documentarian who has been producing programs about the British royal family for 20 years and has worked closely with King Charles for about a decade.

The subscription service is launching two specials for streaming: “The Royal Beat: Her Majesty’s Final Journey” and “Recollections: Memories of Her Majesty.” Both feature royal experts and palace insiders weighing in on Elizabeth’s life and legacy.

Bullen noted that Charles’ primary focus will be on his eldest son Prince William, who is next in line to the throne.

True Royalty TV co-founder Nick Bullen believes that Prince Andrew has no future in the monarchy as a working royal, especially now that Charles is king.
(Photo by Neil Mockford/WireImage)

“I think that’s where you will see the king focusing all of his attention on – the Prince and Princess of Wales,” said Bullen. “A role for Prince Andrew just doesn’t exist anymore. He won’t be given any of his military titles again. He’s not going to be a working royal again. So I think we won’t be seeing very much of him on the public stage again.”

The Duke of York is no longer a senior working royal in the wake of his friendship with late American financier and convicted sex offender Jeffrey Epstein. After a disastrous BBC interview, the 62-year-old announced he was stepping back from royal duties.

Andrew, who was accused of sexual assault by Virginia Roberts Giuffre, was stripped of his military titles and royal patronages in January of this year. He was also banned from using his HRH title. The father of two has repeatedly denied any wrongdoing.

On Monday, Andrew joined the royal family for the queen’s state funeral. Buckingham Palace previously announced that only working members of the royal family would wear military uniforms during the events leading up to and including the queen’s funeral. Andrew wore a dark suit to join the procession.

An exception was made for Andrew once to wear his uniform during the mourning period. The duke wore his military garb for the Vigil of the Princes, where he joined his siblings in standing a symbolic guard over their mother’s coffin.

When Andrew agreed to his now infamous interview in 2019, the prince had no idea that the televised sit-down was a disaster – at first. He was interviewed by BBC Newsnight’s Emily Maitlis in hopes it would finally put to rest any lingering concerns about his ties to Epstein. He also wanted to address accusations that he had sex with a 17-year-old arranged by the convicted sex offender. The interview proved to be a public relations disaster.

“That’s probably the most extraordinary moment — when we get to the end of the interview,” former BBC Newsnight producer Sam McAlister told Fox News Digital. “As I lifted my eyes to survey the scene, the chaos of television — the cables, the wires, all the crew — the thing that is most shocking to see is how cheerful and upbeat he is. He’s feeling so positive that he offers us a tour of the palace. The pictures that the world saw of [him and Maitlis] striding down the palace were taken after the disastrous interview took place. That gives you a taste of just how well he thought it had gone.”

PRINCE ANDREW’S EVERY MOVE WILL BE SCRUTINIZED AS HE REMAINS THORN IN FAMILY’S SIDE: ROYAL EXPERT

Britain’s Prince Andrew, Duke of York attends a vigil with his siblings around the coffin of Queen Elizabeth II on September 16, 2022.
(Photo by HANNAH MCKAY/POOL/AFP via Getty Images)

McAlister detailed how the car-crash interview came to fruition in a book published on Sept. 13 titled “Scoops: Behind the Scenes of the BBC’s Most Shocking Interviews.” In July, it was reported that McAlister’s book was optioned “almost immediately” for a film called “Scoop.”

“He had lived a life of exceptional privilege,” McAlister explained. “He has what I called, ‘the royal delusion.’ I don’t mean that obnoxiously or pejoratively, but the lifestyle had put him in a position where he believed that he was capable of giving good answers. He believed that he would be able to vindicate himself and return to the life that he led. He wanted to walk Princess Beatrice down the aisle. His birthday was coming, and he probably wanted to have a big party. And he wanted to try to set the record straight. It’s my understanding that he felt he could give the answers that would vindicate him, because you would not do that interview unless you believed you had good answers, ones that would put you back into your position of power.”

McAlister claimed she had been in discussions for up to a year with a publicist working for Andrew’s initiative to support entrepreneurs, as well as with his private secretary. She said her first “face-to-face completely alone with his chief of staff” took place in May 2019 at Buckingham Palace. The interview was broadcast in November of that year.

Sam McAlister, a former BBC producer, wrote a book titled ‘Scoops: Behind the Scenes of the BBC’s Most Shocking Interviews’.
(Oneworld Publications)

“Every time the story changed, I’d get back in touch with his chief of staff,” McAlister explained. “It’s another negotiation after months of — let’s be frank —cajoling, pleading, begging. And then finally she agreed to see us again. In October, I took my presenter, the brilliant Emily Maitlis. We saw her alone again for a couple of hours. And then the final negotiation was on the Monday of the week that the interview took place. Negotiations Monday, a yes on Tuesday, panic on Wednesday, the interview on Thursday, editing on Friday, and then it went out on Saturday.”

McAlister claimed that Andrew was accompanied by Beatrice for his final negotiation before the interview took place.

“It was a curveball,” she alleged. “He went, ‘I hope you don’t mind. I’ve brought someone with me.’ I was expecting a lawyer, someone who was going to close this down. Instead, his young daughter comes around the corner. You can only imagine what it was like to have a conversation as delicate as this one involving the allegations that were against him … in front of his daughter.”

“She was exactly as you would imagine — a concerned daughter who is protective of her father,” she continued. “I appreciate these are extraordinary circumstances, and the allegations against him are exceptionally grave. But when it comes down to it, she’s a young woman who clearly loves her father and is looking to protect him. The dynamic between them, despite the extraordinary circumstances, was a protective daughter … listening to us, concerned about what he might be doing. She is very receptive, polite, clever and interested in the process itself. A daughter is the same, whether you’re a prince or a pauper. And that’s exactly who she was.”

Following his disastrous interview, the Duke of York stepped down as a working member of the British royal family.
(Photo by Samir Hussein/WireImage)

McAlister alleged that during the interview, she noticed Andrew nervously tapping his foot as he became “increasingly uncomfortable” over the questions. She assumed that Andrew would be “polished up” and trained by advisors to appear more confident in front of cameras.

“We all know somebody like that, right?” she said. “Somebody who we give great advice to. And then the second they go to do the actual thing itself, they forget it, ignore it, or do their own thing. Now magnify that a thousand times over for a member of the royal family. His chief of staff was a very sensible woman who … was extremely controlled. I’m sure she gave him every piece of advice under the sun. But the second the cameras go on, none of us know how we’re going to react in that kind of environment.”

“He was in his home,” she continued. “He clearly had things he wanted to say. [But] I felt he just got further and further away from the position you might have expected, which was a simple apology, to show regret for the friendship [with Epstein] and to show real pain for the damage that Epstein and his associates had caused … He never managed any of those things. I feel the space between what was rehearsed and what happened was very vast. But we’ll just never know.”

Many in the media were quick to deride Andrew for not only defending his friendship with Epstein, but also for failing to show empathy for the convicted sex offender’s victims.

Virginia Giuffre previously alleged she was abused by the Duke of York when she was underage.
(Getty Images)

Giuffre has said that Epstein forced her to have sex with Andrew in 2001 when she was 17. She alleged that Epstein flew her around the world on private planes to have sex with powerful men, and that she had sexual encounters with Andrew in London, New York and the U.S. Virgin Islands. Epstein died in jail on August 2019 while awaiting trial on federal sex trafficking and conspiracy charges. He was 66.

In March of this year, a U.S. judge dismissed the sex abuse lawsuit against Andrew, three weeks after attorneys for Giuffre had reached a deal. The prince was to make a substantial donation to his accuser’s charity and declare that he never meant to malign her character.

In a letter to the judge from Giuffre’s attorney David Boies, a statement was included that said, in part: “Prince Andrew intends to make a substantial donation to Ms. Giuffre’s charity in support of victims’ rights. Prince Andrew has never intended to malign Ms. Giuffre’s character, and he accepts that she has suffered both as an established victim of abuse and as a result of unfair public attacks.”

ROYAL PRINCES REPORTEDLY AT WAR: ANDREW, CHARLES AND WILLIAM — WILL THEY EVER REUNITE?

With King Charles III and his eldest son Prince William leading the British monarchy, royal experts have said the public should not expect to see Andrew anytime soon.
(Photo by HANNAH MCKAY/POOL/AFP via Getty Images)

According to the statement, the duke acknowledged that Epstein trafficked “countless young girls” over many years. He “regrets his association with Epstein and commends the bravery of Ms. Giuffre and other survivors in standing up for themselves and others.”

McAlister said she wondered what the future held for Andrew, who was described by many as “the queen’s favorite son.”

MEGHAN MARKLE HAS WON OVER SOME IN THE UK: EXPERT SHARES WHAT’S NEXT FOR DUCHESS OF SUSSEX AND ROYAL FAMILY

“I feel that — and this is only my impression — he was regretful of what happened and the outcomes and the effect upon him, his daughters, his ex-wife, his mother, the monarchy,” she shared. “… [But] I don’t think we ever saw that in the interview.”