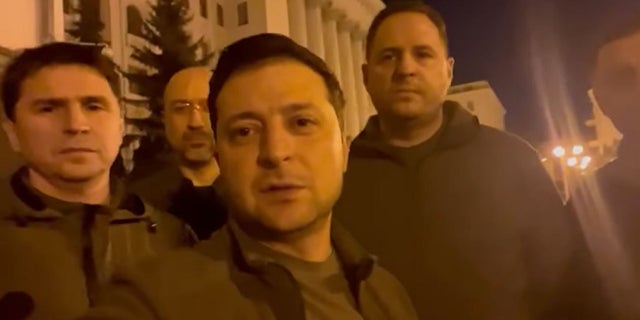 The Kremlin has sent more than 400 Russian-paid mercenaries into Kyiv with the mission to assassinate Ukrainian President Volodymyr Zelenskyy, according to a report.

The Wagner Group, a Russian private military company accused of covertly working with the Russian government, flew in mercenaries from Africa to Kyiv about five weeks ago, The Times of London reported.

Their assignment was to decapitate Zelenskyy’s government and prepare the ground for Moscow to take control in exchange for handsome financial bonuses, according to the newspaper.

The Ukrainian government first received intelligence on Saturday about the Russian mercenaries, The Times reported. Hours later, a curfew was implemented in Kyiv from 5 p.m. to 8 a.m. effective for at least the subsequent 36 hours, “for more effective defense of the capital and the security of its inhabitants.”

Ukrainian President Volodymyr Zelenskyy stands alongside other government officials in a video posted to social media Friday vowing to defend the country from a Russian invasion.
(Armed Forces of Ukraine)

“All civilians who will be on the street during the curfew will be considered members of the enemy’s sabotage and reconnaissance groups,” Kyiv Mayor Vitali Klitschko tweeted on Saturday. “Please treat the situation with understanding and do not go outside.”

In a move supported by U.S. Secretary of State Antony Blinken, the European Union in December moved to sanction the Russia-backed Wagner Group and its associates for serious human rights abuses, including torture and extrajudicial, summary or arbitrary executions and killings, and destabilizing activities in countries including Libya, Syria, the Central African Republic and Ukraine’s Donbas region.

Russian President Vladimir Putin chairs a meeting on economic issues at the Kremlin in Moscow on Feb. 28, 2022.
(ALEXEY NIKOLSKY/SPUTNIK/AFP via Getty Images)

Former U.S. intelligence officials speculated to Fox News Digital that these mercenaries more likely have been operating in Kyiv for months because Russian President Vladimir Putin required on-the-ground intelligence in the Ukrainian capital in advance of the planned invasion that began five days ago.

One official said deploying the Wagner Group to assassinate Zelenskyy gives Putin the option to say, “that wasn’t me.” A second former U.S. official added that having the Wagner Group carry out judicial killings in Kyiv, perhaps by using a nerve agent or something non-traceable, could be the Russian government’s tactic because “something not attributable is an option Putin would want to have.”

The Center for Strategic and International Studies (CSIS) has been documenting Russia’s growing use of private military companies (PMCs) to increase its international influence through irregular means.

The Wagner Group, which has been linked to the Russian Ministry of Defense, particularly the Main Intelligence Directorate (GRU) and Federal Security Service (FSB), more recently has arrived in Mali as France has begun scaling back its military efforts against Salafi-jihadist groups in the region.

Bible Study with Levi – The Simplicity that is in Christ