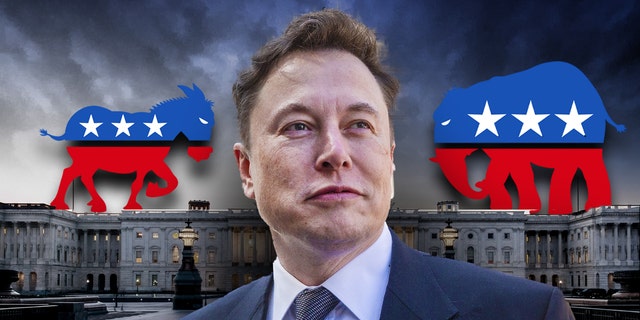 Elon Musk has gone scorched earth with his rebukes of the left. His Wednesday tweet calling the Democrat Party “the party of division and hate” had liberals exploding in rage on Twitter.

Following up his earth-shaking declaration that he would be voting Republican in the next election cycle, the world’s richest man boldly tweeted that Democrats have become so divisive and hate-filled that he can no longer vote for them.

“In the past I voted Democrat, because they were (mostly) the kindness party. But they have become the party of division & hate, so I can no longer support them and will vote Republican,” he tweeted.

Musk also warned that they’d come after him for such statements, adding, “Now, watch their dirty tricks campaign against me unfold …” with a popcorn emoji.

On Wednesday, billionaire Elon Musk slammed the Democrat Party as “the party of division and hate.”

Earlier that day Musk had made a similar claim, predicting, “Political attacks on me will escalate dramatically in coming months.”

Early Thursday morning, Musk slammed progressive activists, which he called “Wacktivists,” with a sarcastic tweet. He wrote, “What I love most about wacktivists is their incredible sense of humor,” along with an angel emoji.

ELON MUSK LIGHTS UP TWITTER AFTER DECLARING HE’LL VOTE GOP NEXT ELECTION: ‘THE LEFT SHOULD REFLECT ON WHY’

The fact that one of the most powerful elites in the world had completely rebuffed woke, politically correct etiquette and slammed the left, sent his critics into an even more dramatic rage than previously. Liberals and Democrats swarmed his “party of division” tweet, dropping anger-filled comments.

Democrat activist group Occupy Democrats tweeted, “BREAKING: Billionaire Elon Musk shows his true colors, announces that he will be voting for Republicans next election and whines that the Democrats are ‘overly controlled’ by labor unions — clearly insurrections don’t bother Musk. RT IF YOU THINK THAT MUSK IS A TERRIBLE AMERICAN!”

Actress Patricia Arquette went after Musk in his replies and even brought the billionaire’s daughter into it, tweeting, “You say this with a straight face as Republicans roll back basic civil rights for LGBT people and women including raped and incested girls being forced to carry their violent attackers child to term? You want your daughter to inherit that?”

Actress Patricia Arquette slams Elon Musk for tweeting that Democrats are the “party of division & hate.”

Singer Stella Parton tweeted, “So you drank the orange Kool Aid didn’t ya lil mister? Well there goes your legacy down the effing drain.”

The Independent writer Femi Oluwole wrote a panicky tweet in response. “Remember when I said that giving one man total control of a global communications platform might not be great for democracy?” he asked. “Well, that man just explicitly expressed his political bias. Everything’s fine!”

MSNBC contributor Dean Obeidallah thought mocking Musk’s Tesla stock was a relevant point to the businessman’s tweet, writing, “Awwww poor Elon is victim- BTW great job with Tesla stock. It was at $1100 a share a few months ago then you leveraged it to buy Twitter and now it’s at $700.”

Leftist journalist Molly Jong-Fast took her anger out on Rep. Lauren Boebert, R-Colo., showing support for Musk in the comments. Boebert had tweeted, “Welcome to the right side, Elon!” and Jong-Fast responded, “Congratulations Elon on winning over the dumbest member of congress.”

“Apartheid raised billionaire ‘decides’ to ‘become’ a Republican. Are you going to announce that water is wet next?” tweeted MSNBC and CNN medical contributor Dr. Bernard Ashby.

Economist David Rothschild mocked Musk’s privilege with his dig, tweeting, “Rich white son of emerald mine owner who grew up in apartheid South Africa is the real victim in our society #ThoughtsAndPrayers.”

“Hey man, if you want to support a bunch of electric vehicle-hating climate deniers, that’s on you,” wrote Pod Save America podcast host and former Obama staffer Jon Favreau. He added, “Not sure it helps the cause that you and your team have dedicated much of your lives to, but I guess you’ll get some attention on Twitter, so there’s that!”

Former Democrat Ohio state senator Nina Turner tweeted, “Framing the GOP as the anti-hate party not even a week after the Buffalo shooting is certainly a choice, Elon.”

“Are you talking about the party that pushes White Replacement Theory based exactly on fear and hate as the ‘kinder party’?” asked journalist Liz Wahl. She added, “Also, which party do you think buys Teslas? We’ve thought about buying one. Not anymore though.”

Infamous leftist Twitter troll BrooklynDad_Defiant! tweeted, “@elonmusk Dude, Democrats are fighting for the poor, people of color, choice, voting rights, education, the environment. KINDNESS? The GOP is literally against ALL of those things. The cruelty IS the point. You’re lying to yourself.”

And The Lincoln Project wrote, “Wrong side, buddy.”

‘We can’t stay in the past’: Sheriff’s office holds