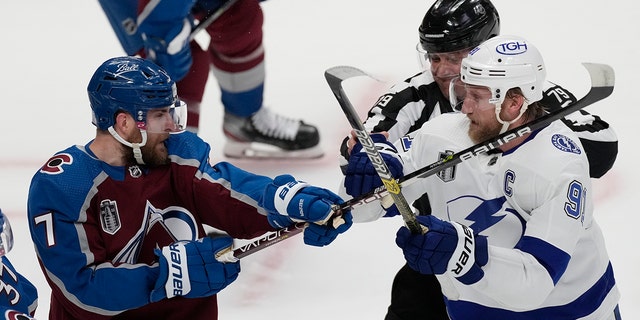 The Tampa Bay Lightning were blasted by the Colorado Avalanche on the road in Game 2 of the Stanley Cup Final on Saturday and veteran Steven Stamkos had a message for his team following the defeat.

Stamkos told his Lightning teammates following the 7-0 blowout to pull themselves up and get their heads back into the series.

“That was totally not acceptable, especially at this time of the year,” Stamkos said of the loss, via The Athletic. “Listen, people are going to be watching this game tonight and probably think the series is over. But our group, we’re a very resilient group.

“So whether it’s one-nothing or seven-nothing or 10-nothing, it’s a loss in the playoffs and you’ve got to move on. We’ve got to man up as a team and as a person. Let’s get back home in front of our fans, and let’s see what we’re made of.”

The Lightning have been in dogfights the entire postseason.

Tampa Bay fought off the Toronto Maple Leafs in the first round, swept the Presidents’ Cup winners, the Florida Panthers, in the second round and came back from an 0-2 deficit to beat the New York Rangers in the conference final. Not only that, the Lightning have played 67 postseason games since Aug. 1, 2020 – the most by one team over the span of three playoffs.

Former NHL star Justin Williams said it’s something that could be weighing heavy on the Tampa Bay players.

“You’ve played an extraordinary amount of games, and playoff games are obviously just a little bit more physical, a little bit more everything as you play them,” said Williams, who will become an NHL Network analyst starting with Game 3. “As of right now, these guys are fading. Listen, they’ve played a lot of hockey, but once you get this far in the playoffs, you’re running mostly on adrenaline right now.

“You feel pretty good, and an excuse to have played too much hockey is one that I’m sure that they’re not prepared to use right now.”