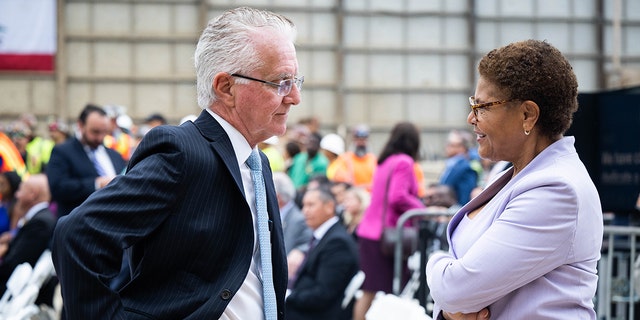 Los Angeles City Council installed a new president Tuesday after a chanting crowd of protesters called for halting the vote until two councilmen resign for their part in a 2021 meeting laced with crude, racist comments.

The selection of Councilman Paul Krekorian to lead the chamber comes amid a week of turmoil and public outrage over the racist rants that threatened to freeze the Council’s business and prompted the resignation of former Council President Nury Martinez.

On Monday, acting Los Angeles City Council President Mitch O’Farrell announced that the two other individuals involved in the leaked conversation, Council members Kevin de León and Gil Cedillo, would be removed from committee assignments regarding real estate development, housing, homelessness and other matters. But so far, both de León and Cedillo have refused to resign from the council altogether despite issuing apologies.

Krekorian, the unanimous choice of the 10 Council members who attended a virtual meeting, the minimum necessary for a quorum to conduct business, said it was time for the city to begin to bridge gaps and restore trust in government. He noted that the election of a Council president is typically a moment of celebration, but instead, Los Angeles faces “one of the most challenging times a city has ever faced.”

Democratic Mayor Eric Garcetti said in a statement he would work with Krekorian and the Council “to help heal the wounds caused by the hateful words of a few.” De León and Cedillo did not attend Tuesday’s virtual meeting.

Not long after the meeting started, Los Angeles police in riot gear faced off with yelling protesters outside a City Hall entrance Tuesday, demanding that the meeting be postponed until the two councilmen resign.

The protest of about 50 people took place outside a door of City Hall, though the Council was meeting virtually with only the acting president and staff inside the chambers. Demonstrators chanted, “No resignations, no meeting!” Police pushed backed protesters who retreated across the street without incident.

Protesters chant a slogan as they face off with police at the entrance of the Los Angeles City Hall in Los Angeles, Tuesday, Oct. 18, 2022.
(AP Photo/Jae C. Hong)

Black Lives Matter, whose protesters have staged outside De León’s home in Eagle Rock, had reportedly demanded that Martinez be replaced by one of the council’s Black members to “demonstrate its commitment to Black political empowerment and political and racial healing.”

The Council on Tuesday also took preliminary steps that could reshape the way government operates in the nation’s second most-populous city. One proposal will explore expanding the number of Council seats, now set at 15. A second would overhaul the way the city adjusts Council district boundaries once every decade to account for shifts in population, a process known as redistricting, which played into the furor over the private meeting.

The leaked conversation pertained to how to maintain Latino political power in redistricting.

Martinez makes racist remarks about the Black son of White councilman Mike Bonin and other crude comments. De León is heard also mocking the child and saying that Bonin, “won’t f—ing ever say peep about Latinos.”

A sign demanding a resignation from LA City Councilmember Kevin de Leon is posted on the garage door of his home in Los Angeles, Tuesday, Oct. 18, 2022.
(AP Photo/Jae C. Hong)

Herrera, who neither objected nor joined in, said his “failure to stand up to racist and anti-Black remarks” demonstrated his “deepest regret.” Cedillo discussed having Mexicans in charge of the city council and labor union, compared to leadership structures 25 years ago, and was present for but did not intervene in the racist comments.