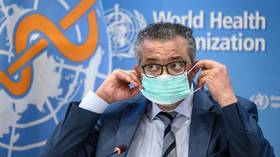 Local officials have raised the county’s risk level to ‘high’ amid a rise in cases, setting the stage for new restrictions

California’s Los Angeles County is on track to reimpose its mask mandate due to a spike in new Covid-19 infections, warning that face coverings may again be required in all indoor public spaces should the surge in cases persist.

The LA health department raised the county’s pandemic risk level from ‘medium’ to ‘high’ on Thursday after recording 8,535 new cases and 14 deaths over the previous day, citing guidelines created by the Centers for Disease Control and Prevention (CDC) based on hospitalization numbers.

New restrictions would be triggered if the level remains ‘high’ for two consecutive weeks, meaning the return of masking rules as early as July 29. Under the CDC guidelines, a region is considered ‘high’ risk once local hospitals hold Covid-positive patients at 10 per 100,000 residents.


Speaking at a press briefing on Thursday, Public Health Director Barbara Ferrer said universal masking “makes a lot of sense because it helps us to reduce risk,” though acknowledged that for many residents, “this will feel like a step backwards.”

Ferrer went on to predict even higher case numbers in the coming weeks, suggesting the mandate is likely to be renewed. Still, she said LA is not seeing “anywhere near the devastation this summer that we saw during last winter’s omicron surge,” referring to a fast-spreading variant of the coronavirus.

While LA still requires masks in a number indoor spaces – such as hospitals, public transportation, airports and prisons – a universal mandate would impose face coverings in virtually all indoor public venues, including offices, factories, retailers, schools and restaurants. A previous sweeping masking order was lifted in March after officials reduced LA’s risk level to ‘low.’

As the county braces for new mandates, the World Health Organization similarly called for a return to face coverings earlier this week, with the org’s Director General Tedros Adhanom Ghebreyesus warning that “the virus is running freely, and countries are not effectively managing the disease.”

Amir Tsarfati: Why is the Cross a Stumbling Block to the...

Automatic Bot - February 3, 2023 0
Chinese hotels and restaurants are seeking employees amid demand recovery in the services sector after the end of Beijing's zero-COVID protocols, with a...
Go to mobile version