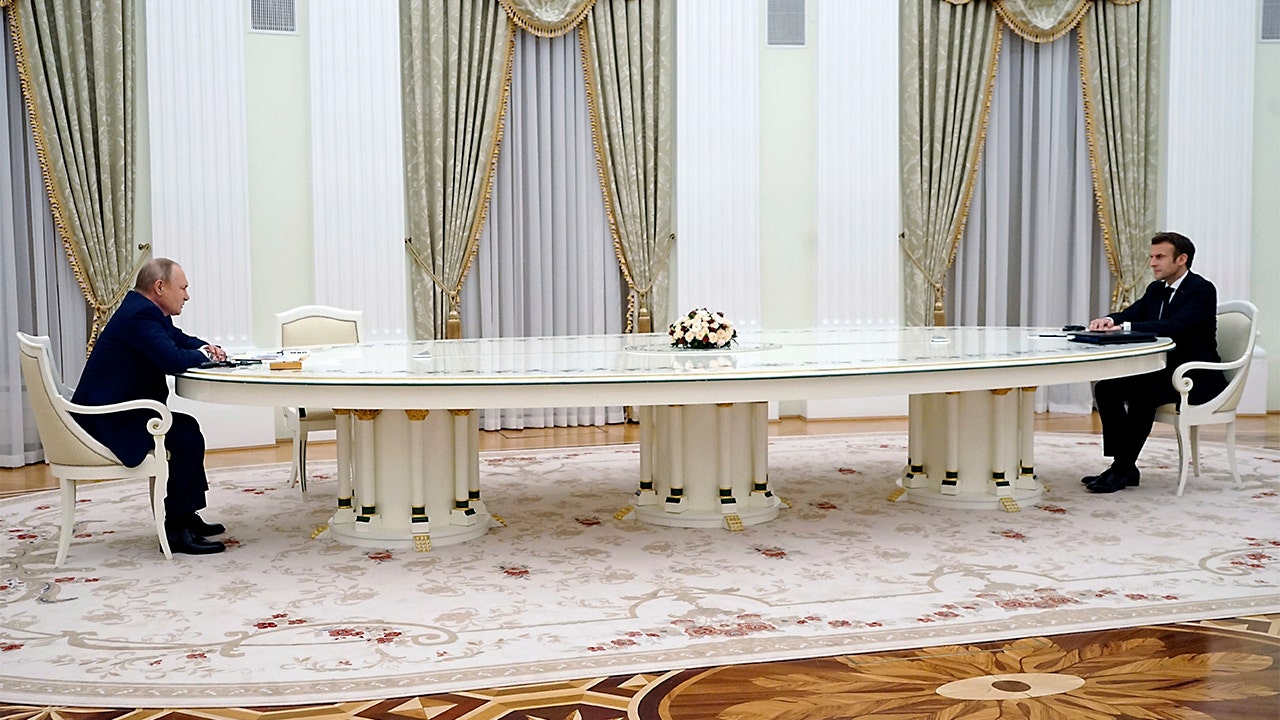 French President Emmanuel Macron refused a Russian COVID-19 test during his visit with Russian President Vladimir Putin due to fears that Russian authorities could use the test to obtain his DNA, according to a report.

Macron later appeared across a long table from Putin.

“We knew very well that meant no handshake and that long table. But we could not accept that they get their hands on the president’s DNA,” a source said, according to Reuters.

Asked for comment by the outlet, a Macron spokesperson said, “The president has doctors who define with him the rules that are acceptable or not in terms of his own health protocol.” Fox News Digital has reached out to the French Embassy in Washington for comment.

Macron opted to undergo a PCR test in France and an antigen test in Russia, both of which were negative, according to the report. He previously tested positive for COVID-19 in December 2020.

Another source close to the French president said that Russian officials were stringent and uncompromising with their protection of Putin’s health, insisting that the world leaders be kept in a metaphorical health bubble.

However, it appears that Russian officials were not particularly upset by Macron’s skittishness, so long as everyone followed the alternative rules.

“There is no politics in this, it does not interfere with negotiations in any way,” a Kremlin spokesperson told the outlet.

President Biden and French President Emmanuel Macron have a conversation ahead of the NATO summit at the North Atlantic Treaty Organization headquarters in Brussels, on June 14, 2021.
(Dursun Aydemir/Anadolu Agency via Getty Images)

The 44-year-old French president, who is expected to seek re-election later this year, made headlines earlier this week by using the word “emmerder” — rooted in the French word for “crap” and meaning to rile or to bug.

BLINKEN SAYS RUSSIA INVASION ‘COULD BEGIN AT ANY TIME,’ INCLUDING DURING OLYMPICS: LIVE UPDATES

He was talking about his strategy for pressuring vaccine refusers to get coronavirus jabs. His vulgar language dominated news broadcasts and provoked angry reactions from his political rivals.

Meanwhile, amid growing tensions along the Russia-Ukraine border, President Biden warned Americans who remain in Ukraine that they should get out of the country.

“It’s not like we’re dealing with a terrorist organization,” Biden said. “We’re dealing with one of the largest armies in the world. It’s a very different situation and things could go crazy quickly.”

Biden also said there is no scenario in which he would send troops to rescue Americans in Ukraine trying to flee the country. “There’s not. That’s a world war when Americans and Russia start shooting at one another,” Biden said. “We’re in a very different world than we’ve ever been.”

Fox News’ Kyle Morris and The Associated Press contributed to this report.