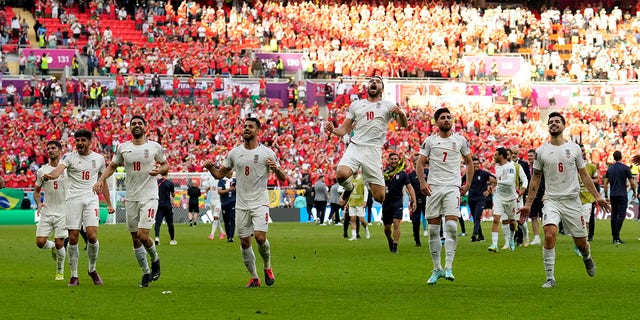 As demonstrations against the regime in Iran hit day 75, many of the protesters hope that the U.S. men’s national team at the World Cup and the Biden administration can send a signal of support to the protesters.

Some protesters feel that an Iranian loss or draw in the upcoming game against the U.S. will hurt the regime on the world stage and give fuel to the protesters fight on.

In an encrypted telephone interview with Fox News Digital on Monday, an Iranian woman who called herself “Mahoora” and lives in southern Iran, said, “It’s not just some people in Iran, it is the majority of people in Iran that want the U.S. to win” on Tuesday. The silent majority [of Iranians] did not celebrate the regime team’s victory over Wales.”

Mahoora explained that Iranians reject their national team, saying, “Because a soccer team should bring honor to its people. They must be our champions. But right now people on the street are getting murdered. And people are burying children after they were killed, and the soccer team of the mullahs met [President] Ebrahim Raisi and celebrates someone’s birthday and laughed together. And they didn’t pay attention to the people. The football players just wanted to be the center of the attention.”

During the Fox News Digital interview with Mahoora, the internet connection was frequently disrupted due to the clerical regime’s efforts to disrupt conversations amid the protest movement unfolding in the totalitarian state.

Mahoora noted that “after the soccer team of the mullahs won against Wales, the people of Iran did not celebrate. The regime brought in terrorists, Hezbollah, from Lebanon and the Houthis from Yemen to celebrate the victory.”

The Supreme Leader of the Islamic Republic of Iran Ali “Khamenei is just [a] servant of Russia. Khamenei is stealing the wealth of Iran,” said Mahoora.

Mahoora cannot provide her full name because of the violent crackdown on dissent against the regime.

According to the NGO Human Rights Activists News Agency (HRANA), the clerical regime has murdered 451 protesters and incarcerated 18,170 since mid-September. HRANA said 60 security personnel have died during the nationwide demonstrations.

Reports from Iran say Iranians cheered England’s win against Iran and are now pulling for the U.S. as it takes on Iran in a World Cup match on Nov. 29, 2022.
(Richard Sellers/Getty Images)

The revolts across Iran were sparked by the morality police’s Sept. 13 arrest of Mahsa Amini in Tehran for her alleged failure to properly cover her hair with a hijab.

Mahoora cited three Iranian soccer stars who are not in Doha, Qatar — the site of the World Cup — but are standing with the Iranian people against Khamenei’s regime: Ali Daei, Ali Karimi and Iranian-Kurdish player Voria Ghafouri.

Iran’s regime imprisoned Ghafouri for his show of solidarity for the “woman, life, freedom” movement unfolding in Iran.

Tina Ghazimorad, the editor-in-chief of news at the London-based Manoto TV outlet, echoed Mahoora’s scathing criticism of the Iranian team being a wholly owned subsidiary of the Islamic Republic’s radical ideology and state security apparatus. Manoto is one of the most popular Farsi language channels outside of Iran and is known for its criticism of the regime.

“The Islamic Republic hijacked the national team like everything else in Iran because they made it political. The IRGC [Islamic Revolutionary Guard Corps] is running sports teams,” Ghazimorad said.

The U.S. government has sanctioned the IRGC as a foreign terrorist organization. Fox News Digital reported on the terror links between Iran’s karate team and the IRGC.

Ghazimorad said “Iranians are rooting for every other team playing against it.”

Iran is facing international criticism following the brutal beating of a protester at the hands of anti-riot police.
(The Foreign Desk)

She continued, “For many Iranians, this is a national team and has not showed any reactions suitable to what is happening to Iranians in Iran. Many people who lost their lives [in the protests] supported the national team. This is a very political team. The Islamic Republic stands for making a false enemy, the U.S. All dictators need an imaginary enemy. The animosity of the Islamic Republic of Iran toward the U.S. … over 43 years has been unjustified.”

The U.S. and the EU have imposed sanctions on the clerical regime for its drive to build a nuclear weapons device and its widespread violations of human rights.

Ghazimorad said it is impossible to create a wall between sports and power politics in Iran.

A telling example of Iran’s regime using sports as a political tool, said Ghazimorad, is the “team met with Raisi before they went to Qatar and the goalkeeper [Alireza Beiranvand] bowed to Raisi.”

Beiranvand later broke his nose in Iran’s match against England. Iranians in Iran were “happy about that” goalkeeper’s broken nose “because this is some sort of punishment.”

Ghazimorad said Iranians want the national team to ramp up their protests against the regime. She pointed to a recent tweet issued by her channel that shows Iranians cheering on England while watching the game in Iran.

“By standing there and not singing [the] national anthem, that is not enough,” Ghazimorad said. She said the Iranian soccer team could have “kneeled down like England’s team or wore black wristbands.”

The recent murder of 9-year-old Iranian boy Kian Pirfalak, who is considered to be the youngest victim of the purge of protesters by Iran’s rulers, triggered new fury in Iran and against the country’s soccer squad.

“The Iranian team did a photo shoot and laughed and this increased the anger. The photo shoot destroyed them because they were just laughing. The photo shoot happened just a day after Kian’s death. Instead of laughing, they could have simply posed,” said Ghazimorad.

Fox News Digital sent press queries to the U.S. State Department, the Islamic Republic of Iran’s foreign ministry and its mission to the UN, as well as to the U.S. men’s national soccer team.

The U.S. team briefly deleted the emblem of the Islamic Republic of Iran’s flag from its Twitter account as a show of sympathy for the protestors in Iran. Tehran’s rulers fired back, urging the world soccer body, FIFA, to suspend the American team.

Iranian-American journalist and women’s campaigner Masih Alinejad told Fox News that the Islamic Republic of Iran is a “gender apartheid regime” because “half of the population in Iran are not even allowed to go to a stadium and watch [a] football (soccer) game.”

University students in Tehran attend a protest on Oct. 7, 2022, sparked by the death of 22-year-old Mahsa Amini in the custody of the country’s morality police.
(AP Photo)

Iran’s banning of women in soccer stadiums has not caused FIFA to punish the Islamic Republic. Alinejad also said that the Iranian soccer team does not represent the people of Iran.

Lisa Daftari, an Iran expert and editor-in-chief of The Foreign Desk, told Fox News Digital, “Imagine how dire the situation is for Iranians who are actually not rooting for their own team, as they see their national team as not an extension of the Iranian people but aligned with the Islamic regime.”

Iranians protest in Tehran, Sept. 20, 2022, the death of Mahsa Amini after she was detained by the country’s morality police.
(AP Photo/Middle East Images, File)

Daftari added, “We saw in the Iran/England matchup how Iranians were actually cheering when the opposing teams scored, and they may do the same in rooting for the U.S. in this match. At the last very least, we will surely see Iranians using this opportunity to call on the U.S. to support their movement.”

There is a striking parallel between the 2022 World Cup and Iran’s first appearance in the 1978 World Cup in Argentina, say Iran observers. In 1978, Iranians took to the streets to protest the government of the last monarchy ruler of Iran, Shah Mohammad Reza Pahlavi.

A year later, the Islamic revolution ousted the Pahlavi dynasty.

Questions now abound whether the theocratic Islamic state is on the brink of collapse due to massive protests rocking Khamenei’s regime.