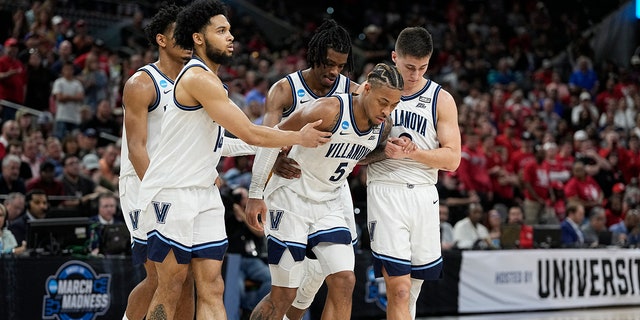 Villanova is headed to its third Final Four in the past six NCAA Tournaments, but at a cost: an injury to Justin Moore.

The junior shooting guard went down with a right leg injury in the closing seconds of the team’s South Region Championship against the Houston Cougars on Saturday.

Coach Jay Wright told reporters after the game that X-rays didn’t reveal any broken bones, but he failed to express much optimism for his player beyond that.

Villanova guard Justin Moore is helped off the floor in the Elite Eight round of the NCAA tournament on Saturday, March 26, 2022, in San Antonio.
(AP Photo/David J. Phillip)

Moore, who has averaged 13.6 points per game for the Wildcats during the NCAA Tournament, appeared to slip while dribbling against a defender with less than 40 seconds left in Saturday’s game.

Moore limped off the court with the help of his teammates, who were later seen consoling him following his exit from the game.

He was later seen on crutches during the Wildcats’ postgame celebration.

“A lot of our guys ran right over to him because we’re not in the position we are without him,” Villanova guard, and fifth-year senior Collin Gillespie told reporters after the game. “So we just wanted to go over to him and just appreciate what he does for us and know that we got his back.”

While Moore only scored eight points on 2-for-10 shooting from the field in Villanova’s 50-44 Elite Eight victory, he has been an important player for the Wildcats. Moore has averaged 34.6 minutes and totaled 4.8 rebounds, 1 steal, and 14.8 points per game this season.

“I’ve been in that position before,” Gillespie added. “I know what it feels like. We don’t know what the injury is yet, he still has to get checked, but I don’t ever want to see him by himself. He’s done so much for his team, always guards the best player, is one of our best offensive players, and will do anything for any one of our guys on either end of the floor.”

They clinched the first spot in this year’s Final Four in New Orleans and will play either play Kansas, the only No. 1 seed remaining, or 10th-seeded Miami next Saturday.

Seven Day Suspension is Over – I am a Free Man

What Is the Difference Between ‘Clinically’ and