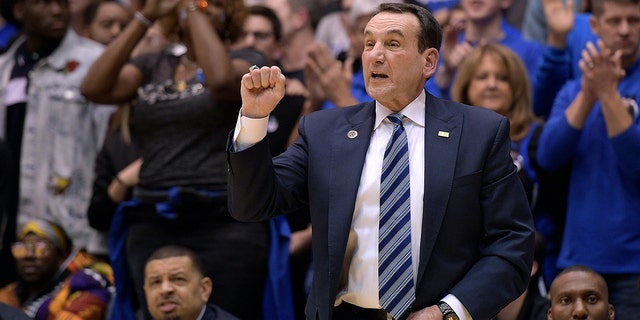 Legendary Duke men’s basketball coach Mike Krzyzewski will coach his home finale against North Carolina Saturday in what could very well be his final matchup against the Tar Heels.

Duke, under Krzyzewski, clinched at least a share of the ACC regular-season title again. While the Blue Devils may face the Tar Heels again in the ACC Tournament or the NCAA Tournament, Krzyzewski’s involvement in the Tobacco Road rivalry is coming to a close.

Duke enters the game ranked No. 4 in the latest Associated Press Top 25 poll, and the Blue Devils defeated North Carolina earlier in the year, 87-67. The Tar Heels are hoping to spoil Krzyzewski’s final game at Cameron Indoor Stadium while also improving their case for a spot in the Big Dance this month.

The hype surrounding the game is already off the charts.

StubHub said Saturday’s game is already one of the highest-selling games between the two teams. The get-in price on StubHub is already up more than $4,600 with the average price of tickets sold at nearly $5,000.

“StubHub is seeing remarkable demand from Duke fans eager to catch Coach Krzyzewski’s farewell home game against North Carolina this weekend. The average ticket price is more than double the price we’ve seen for any prior matchup between the two rivals in StubHub history,” StubHub spokesperson Mike Silveira said Thursday.

“While the game currently ranks as StubHub’s third highest-selling Duke vs. North Carolina matchup, we expect the game to trend toward No. 1 as ticket sales increase closer to Saturday..”

Krzyzewski has a career record of 1,123-306 at Duke and was 73-59 at Army before he took the head coaching job with the Blue Devils. He has been Duke’s coach since the 1980-81 season and has led the Blue Devils to three national championships in that span. Last year’s team was the first to fail to reach the NCAA Tournament since 1995. The 2019-20 season was canceled due to the coronavirus pandemic.

His 1,196 total wins are the most all-time among Division I men’s coaches.

Duke and North Carolina have one of the best rivalries in all of college basketball, if not all of sports. Krzyzewski has been a leading man in the rivalry opposite Dean Smith, Bill Guthridge, Matt Doherty, Roy Williams and Hubert Davis on the opposing bench over the years.

Duke is 50-46 under Krzyzewski in the rivalry.

Next up for Duke?

Coach K and the Blue Devils play next in the ACC Tournament as a warm-up for one final run at a national title.

As the Pentagon’s favorite think tank calls for a swift end...