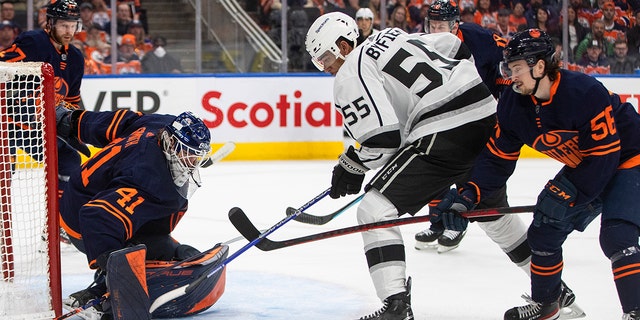 Mike Smith bounced back with a perfect 30-save night and the Edmonton Oilers beat the Los Angeles Kings 6-0 Wednesday to even their first-round playoff series through two games.

Evander Kane had two goals and an assist, Ryan McLeod had one of each and Jesse Puljujarvi, Darnell Nurse and Leon Draisaitl also scored. Connor McDavid added two assists.

Smith, who made the fatal puck-handling mistake that led to Edmonton’s 4-3 loss in Game 1 on Monday, completed his fifth playoff shutout.

“I made one bad play and it cost us the game,” he said. “I think I just carried the same kind of mindset into tonight and obviously wanted to put in a good showing, especially after you feel like you’re maybe the cause of the loss.”

“That is a true pro,” he said. “I thought he made some really good saves in Game 1 as well. It was an unfortunate puck handle. But … we moved on to preparing for Game 2 and he led the way in his preparation. I thought he went out and executed tonight.”

Jonathan Quick stopped 30 of 36 shots for the Kings.

“Sometimes you tip your hat to the opposition, they played a really good game,” Los Angeles coach Todd McLellan said.

The series moves to Los Angeles for Game 3 on Friday, with the Kings also hosting Game 4 on Sunday. Game 5 goes Tuesday in Edmonton.

The Oilers put away their second power-play goal of the night 11:55 into the third after Quinton Byfield was called for holding. Kane fired in a snap shot from inside the faceoff circle for his second goal of the night.

“It seems that special teams, these first couple games throughout the league, have been very important,” Kane said. “The other night, we won the special teams battle and lost the game — that doesn’t happen very often. Tonight, we did a great job again, and that’s going to have to be continued throughout the rest of our journey here.”

Edmonton jumped ahead 5-0 early in the third when Puljujarvi collected a pass across the slot from McDavid and ripped a shot over Quick’s glove.

Just 21 seconds earlier, Kane capitalized when Sean Druzi bobbled a puck in the slot in front of the Kings’ net and the Oilers winger tipped it in for his first goal of the postseason.

The Oilers took a 3-0 cushion into the third period after Evan Bouchard sent a shot sailing from just inside the blue line and McLeod tipped it past Quick 16:05 into the second.

Nurse scored short-handed at 6:03 of the second, charging down the ice with McDavid and firing a wrist shot that deflected off of the Kings’ Arthur Kaliyev and over Quick’s glove for a 2-0 lead.

After a goalless first, Edmonton opened the scoring on the power play after Dustin Brown was called for goaltender interference early in the second. Tyson Barrie sliced a crisp pass to Draisaitl in the far faceoff circle, and the star sniper blasted a one-timer past Quick for his second goal of the playoffs.

The Oilers were 2 for 3 with the man advantage on Wednesday and the Kings went 0 for 4.

“We didn’t play hard enough, really,” Los Angeles center Anze Kopitar said. “We got some power-play opportunities and we couldn’t convert and they did. It was a big turning point in the game and couldn’t really get going.”

NOTES: Los Angeles is 0 for 8 on the power play through the first two games of the series. … Kings F Viktor Arvidsson missed a second straight game with an undisclosed injury. … F Josh Archibald slotted into Edmonton’s lineup as Woodcroft opted to play 12 forwards and six defensemen.