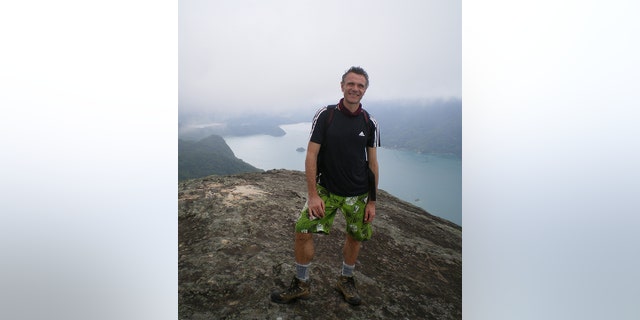 Two bodies have been found during the search for missing British journalist Dom Phillips and a former Indigenous official who have been missing in the remote Brazilian Amazon for more than a week.

The BBC reported Monday that two bodies have been discovered, but official identification remains pending. The Guardian, where Phillips was a regular contributor, spoke with his brother-in-law, Paul Sherwood, who said the family had been contacted by the British embassy about the discoveries.

“He said he wanted us to know that … they had found two bodies,” Sherwood said, referring to his conversation with the embassy. “He didn’t describe the location and just said it was in the rainforest, and he said they were tied to a tree, and they hadn’t been identified yet.”

“He said that when it was light, or when it was possible, they would do an identification,” Sherwood added.

A photo shows British journalist Dom Phillips, who went missing while reporting in a remote part of the Amazon rainforest near the border with Peru, in Brazil, in this picture taken in December 2009 and obtained by Reuters on June 7, 2022.
(Paul Sherwood/Handout via REUTERS)

The two men were last seen the morning of June 5 near the Javari Valley Indigenous territory, located in an area of the remote Brazilian Amazon bordering Peru and Colombia. They were returning alone by boat on the Itaquai to Atalaia do Norte but never arrived.

The items were found Sunday afternoon and were carried by federal police officers by boat to Atalaia do Norte, the closest city to the search.

In a statement Sunday night, police said they had identified the items as the belongings of both missing men, including a health card and clothes belonging to Pereira.

A backpack identified as belonging to Phillips was found tied to a tree that was half-submerged, a firefighter told reporters in Atalaia do Norte. It is the end of the rainy season in the region and part of the forest is flooded, according to The Associated Press.

A laptop was also found by search teams concentrating efforts around a spot in the Itaquai river where a tarp from the boat used by the missing men was found Saturday by volunteers from the Matis Indigenous group.

The development came a day after police reported finding traces of blood in the boat of a fisherman who is under arrest as the only suspect in the disappearance. Officers also found organic matter of possible human origin in the river. The materials are being analyzed.

A federal police expert examines a boat seized by the Task Force for the rescue of Indigenist Bruno Pereira and Journalist Dom Phillips at the port of the city of Atalaia do Norte, Amazonas, Brazil, on June 11, 2022.
((Photo by JOAO LAET/AFP via Getty Images))

Amarildo da Costa de Oliveira, also known as Pelado, is under arrest on a charge of illegal possession of restricted ammunition, but a judge ordered him held for another 30 days as the investigation into the disappearances continue. According to accounts by Indigenous people who were with Pereira and Phillips, the suspect brandished a rifle at them the day before the pair disappeared.

The suspect denies any wrongdoing and said military police tortured him to try to get a confession, his family told AP.

The area where the two men disappeared has seen violent conflicts between fishermen, poachers and government agents. Violence has grown as drug trafficking gangs battle for control of waterways to ship cocaine, although the Itaquai is not a known drug trafficking route.

Pereira, who previously led the local bureau of the Brazilian government’s Indigenous agency, known as FUNAI, has taken part in several operations against illegal fishing. In such operations, as a rule, the fishing gear is seized or destroyed while the fishermen are fined and briefly detained.

Only the Indigenous can legally fish in their territories.

Authorities have said the main line of the police investigation into the disappearance has pointed to an international network that pays poor fishermen to fish illegally in the Javari Valley reserve, which is Brazil’s second-largest Indigenous territory.

Bombshell court filing suggests the FBI knew ‘Russiagate’ was a fraud in January of 2017, but it kept up its pressure on Trump —...

China urges people not to touch foreigners after first