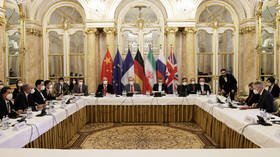 The final text of the deal is almost agreed upon, a top Russian diplomat has said

International talks to salvage the Iran nuclear deal are drawing to an end, with the final wording of the accord almost ready, Mikhail Ulyanov, Russia’s representative at the negotiations, revealed in an interview published on Friday.

However, the document meant to rein in Tehran’s nuclear program still has to be approved by both Iran and the US, which unilaterally left the deal.

Speaking to Izvestia, the Russian Ambassador indicated that all sides had almost agreed upon the final wording of the updated document.

According to Ulyanov, there will be no protracted talks in the nearest future, with the eventual fate of the deal, formally known as the Joint Comprehensive Plan of Action (JCPOA), hinging on whether its parties, including Tehran, will consent to “the package solution that was distributed on August 8.”

He was referring to the EU-submitted “final text” that had been negotiated by all parties on Monday. EU Foreign Policy chief, Josep Borrell wrote on Twitter that “behind every technical issue and every paragraph lies a political decision that needs to be taken in the capitals,” signaling that the text should now be approved by the governments in Iran and the US.

According to Ulyanov, “the text is agreed upon almost completely.”


“The Iranian side raised some questions regarding just a few words, a few lines. Besides that, everything else is considered to have been agreed upon,” he added.

However, the Russian ambassador cautioned that “the devil is always in the details,” and even the last few sentences may prove to be a stumbling block, as has happened before.

“I hope that this will not happen. The text of the [agreement] is not bad; it reflects a very reasonable compromise. This is the case when everyone is basically happy, but at the same time somewhat dissatisfied with certain provisions of the draft. But this means that the package is good, balanced, and this is the way multilateral talks should look like,” he noted.

The end purpose of the talks, Ulyanov said, is to return to the initial 2015 deal, but the sides had to introduce some changes because so much time had passed since the original document had been signed.

“Due to the policy of maximum pressure pursued by [former US President Donald] Trump, the Iranian nuclear program has been significantly boosted. Perhaps, even the Iranians themselves, – or, at least external observers – did not expect such progress. All this needs to be backtracked, and all this will be done if the deal is closed… The nuclear program will return to its former state,” the diplomat pointed out.

Ulyanov comments come as the Russian Foreign Ministry warned on Thursday that any ‘Plan B’ in the talks on the Iranian nuclear deal would violate a “consensus decision” of the UN Security Council on the issue and have “unavoidable negative consequences” for the Middle East. Earlier, several Western media published pieces calling on Washington and Brussels to work out an alternative, apparently yet-to-be-devised path if the Vienna negotiations yield no results.


According to Ivan Nechaev, the ministry’s deputy spokesman, the revival of the existing 2015 deal through the Vienna talks is the only “reasonable and effective way” forward. At that, he welcomed the latest round of indirect talks between the US and Iranian delegations in the Austrian capital, adding that “a positive result… is achievable.”

The original nuclear deal signed in 2015 by Iran, the US, the UK, France and Germany – as well as Russia, China and the EU – involved Tehran agreeing to certain restrictions on its nuclear industry in exchange for the easing of economic sanctions and other incentives.

In 2018, however, it was torpedoed by the US under then-President Donald Trump who unilaterally withdrew from the agreement saying that it was fundamentally flawed. In response, Iran started gradually reducing some of its commitments under the accord, such as the level of enriched uranium it produces, which potentially might enable Tehran to build an atomic bomb. However, according to Iranian authorities, that “is not on the agenda.”