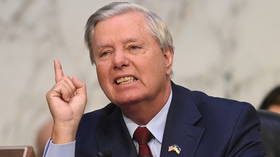 Branding Russia a state sponsor of terrorism by the US could lead to a severing of ties, a Foreign Ministry official says

If the US designates Russia as a state sponsor of terrorism, it would be “a point of no return” in relations between the two countries, and Washington is aware of that, a Russian Foreign Ministry official has said.

In an interview with TASS published on Saturday, the head of the ministry’s North American Department, Aleksandr Darichev, was asked about the possibility of downgrading relations with the US over its support for Ukraine in the conflict with Russia and the unprecedented sanctions imposed on Moscow.

“I wouldn’t want to philosophize about what’s possible and what’s not in the current turbulent situation when the US-led West has trampled upon international law and absolute taboos in diplomatic practice,” he said.

The diplomat commented on the idea of labeling Russia as a state sponsor of terrorism, which has been promoted recently by US lawmakers.


“Its implementation would mean that Washington has crossed the point of no return with the most serious collateral damage for bilateral relations, up to downgrading of their level and even severance of all ties,” Darichev said, adding that “the American side has been warned” about it.

In late July, the US Senate unanimously approved a non-binding resolution calling upon US Secretary of State Antony Blinken to designate Russia as a state sponsor of terrorism.

In the House of Representatives, a similar move is supported by Speaker Nancy Pelosi. According to a report by Politico, Pelosi even warned Blinken that if he does not move ahead with the measure, Congress will do so itself by passing legislation.

The lawmakers say that putting Russia on the same list as Cuba, North Korea, Iran, and Syria would enable the US to further increase the pressure on Moscow by expanding the sanctions beyond specific sectors of its economy.

The State Department has so far been reluctant to fulfill the request, arguing that the sweeping sanctions that have already been imposed on Russia over the conflict in Ukraine are enough.