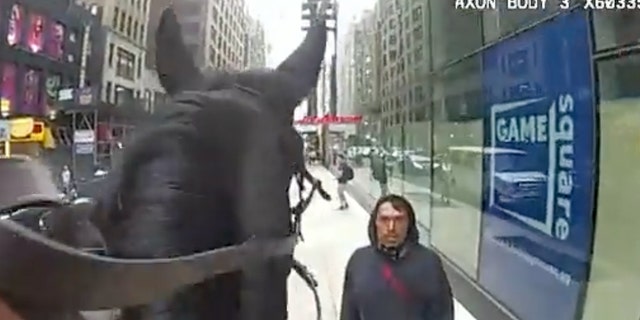 “All of your NYPD officers are involved in crime reduction, even the four-legged ones,” the department tweeted Tuesday, sharing video of the chase that did not include audio.

Police said the mounted officer was approached by a 60-year-old man, the victim, who accused the suspect of stealing merchandise off his display table.

The suspect makes eye contact with the officer before fleeing.
(NYPD)

“The victim confronted the subject, who displayed a broken piece of glass and swung it towards the victim in a threatening manner,” the department said in a statement. “The suspect fled the location on foot and a police officer of NYPD’s Mounted Police apprehended the suspect with the assistance of Public Safety Officers.”

The video, recorded by a mounted special operations officer’s bodycam, shows the officer approaching a suspect, who after a brief exchange begins fleeing on foot. The horse gallops in pursuit, darting around cars stuck in traffic.

Officers arrest the suspect before he makes it off the block.
(NYPD)

Other officers who were in the area on foot capture the fleeing suspect before he can make it off the block.

Police said they arrested 34-year-old Ignacio Lewis, a homeless man, on charges of first-degree robbery, menacing and criminal possession of a weapon. They also recovered seven pairs of sunglasses allegedly swiped from the victim’s display table.

Robberies in New York City are up more than 39% year to date in 2022 compared to 2021, police statistics show.