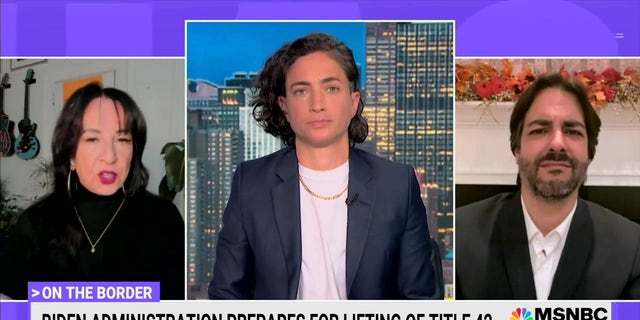 MSNBC analysts Maria Hinijosa and Fernand Amandi both agreed that there is no “crisis” at the border while appearing on “The Mehdi Hasan Show” Sunday night.

Guest host Paola Ramos discussed the subject of immigration ahead of Title 42 enforcement set to end in December. Although Customs and Border Protection reported an all-time record of over 230,000 border encounters in October, Hinijosa attacked any claims that there is a “crisis” at the southern border.

She even objected to the border photos MSNBC was running during the segment, saying, “Look, first of all, we should stop using the kind of, actually even the kind of imagery being shown right now. You know, we should not be perpetuating a conversation about a crisis that is a human drama but that this United States is not being overrun, flooded by uncontrollable situations on the border. That’s not happening in terms of tens of thousands of people trying to get [in] — no!”

She added, “I would encourage the Biden administration, as I’ve been saying from the very beginning, what you have to do is you have to differentiate and you have to make clear that they are not going to perpetuate and fall into this rhetoric about there is a drama and a crisis of so many people coming. No! [Speaks in Spanish.] It’s not that way. You know what’s out of control, Paola, and I know you know this. What’s out of control on the border is absolutely the militarization of the border, the dehumanization of people at the border.”

AIR MARSHALS SOUND ALARM ABOUT BEING SENT TO BORDER: ‘DEMOLISHING OUR CHANCES TO STOP ANOTHER 9/11’

Amandi agreed with Hinijosa, insisting there is no crisis and attacking Republicans for suggesting otherwise.

“I want to endorse Maria’s points absolutely about the fearmongering. There is no crisis at the border. If anything, what we need to do is highlight again the stunning hypocrisy of the Republican Party when it comes to how they handle immigration and immigration policy,” Amandi said.

Various MSNBC guests and reporters have downplayed or criticized Republicans for insisting that there is a crisis at the southern border. MSNBC host Joy Reid questioned in 2021 whether illegal crossings at the border were the “crisis” that “Republicans so desperately want the media to portray it as.”

However, MSNBC host Joe Scarborough referred to the border situation as a “humanitarian crisis” on his show “Morning Joe” Monday, less than 12 hours after Hinijosa and Amandi declared there was no crisis.

Lindsay Kornick is an associate editor for Fox News Digital. Story tips can be sent to lindsay.kornick@fox.com and on Twitter: @lmkornick.

Who will be protected during the Great Tribulation