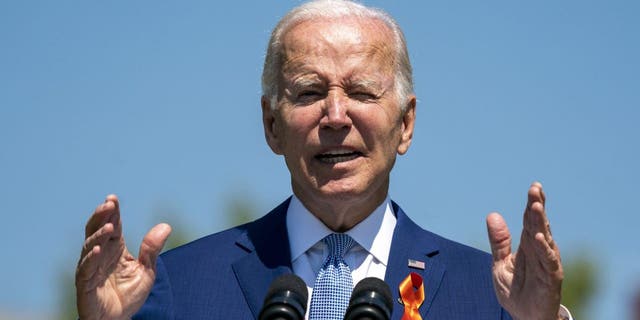 MSNBC and CNN highlighted President Biden’s cratering approval rating this week, as well as concerns that Democrats and the general American public are becoming increasingly frustrated with his job performance.

Much of the discussion was sparked by a Monday New York Times poll that showed a stunning 64% of Democrats would prefer a different candidate to run for office in 2024.

Times reporter Shane Goldmacher called the national mood “decidedly dark,” and asserted Biden faced an “alarming level of doubt” from members of his own party.

“For Mr. Biden, that bleak national outlook has pushed his job approval rating to a perilously low point. Republican opposition is predictably overwhelming, but more than two-thirds of independents also now disapprove of the president’s performance, and nearly half disapprove strongly,” Goldmacher reported.

US President Joe Biden speaks during an event commemorating the passage of the Bipartisan Safer Communities Act on the South Lawn of the White House in Washington, D.C., US, on Monday, July 11, 2022.
(Photographer: Shawn Thew/EPA/Bloomberg via Getty Images)

The poll was discussed numerous times across both CNN and MSNBC, often becoming part of a larger discussion on public sentiment about the Biden administration and its potential implications for the 2022 and 2024 elections. Many hosts called the polls “concerning” and “frustrating” for Democrats.

CNN’s David Chalian drew attention to the fact that Biden only holds a 70% approval rating among Democrats, a low number in a hyperpartisan era for the incumbent.

“That is a treacherous warning sign,” Chalian said of the polling data.

While discussing Biden’s numbers, MSNBC “Morning Joe” co-host Willie Geist brought attention to a recent opinion piece in The Los Angeles Times, entitled “Where Did Joe Biden Go Wrong?”, which called Biden a “political mess” whose problems are both “ideological” and “structural.”

An image of the entrance to the New York Times building in New York City NY.
(DON EMMERT/AFP via Getty Images)

The president has experienced an unusual level of criticism on air and in print over the last week, on the heels of the overturning of Roe v. Wade that has progressives demanding a stronger response.

New York Times columnist Michelle Goldberg wrote on Monday that Biden was “too old” to run for reelection in 2024, adding that he seemed “too worn out and unfocused” for her taste when he first ran in 2020.

“By the time he finally achieved the office he longed for, he was far past his prime,” Goldberg wrote, adding that many of the crises facing the Biden administration were not his fault. “Nevertheless, I hope he doesn’t run again, because he’s too old.”

“Those Democrats cite Biden’s age more than any other factor, though job performance is close behind. Their concern isn’t surprising. Biden has always been given to gaffes and malapropisms, but there is a painful suspense in watching him speak now, like seeing someone wobble on a tightrope,” she added.

On Saturday, the New York Times again cited Biden’s age, calling it an “uncomfortable issue” for the administration in a stinging report from correspondent Peter Baker.

Baker acknowledged that Biden’s energy level is “not what it was” and that some aides “quietly watch out for him.”

“He often shuffles when he walks, and aides worry he will trip on a wire. He stumbles over words during public events, and they hold their breath to see if he makes it to the end without a gaffe,” Baker wrote.

New York Magazine’s Ed Kilgore also cast serious doubt on whether Biden would be able to run in the next presidential election this week, as he delved into the pessimistic attitude that many Democrats have towards Biden’s leadership of the country and acknowledged his unpopularity could weaken its prospects.

“Joe Biden is at present a very unpopular president whose performance has discouraged his party’s base. That’s a bad combination for Democrats, who are facing a 2022 midterm election with fragile control of both houses of Congress,” Kilgore wrote.

President Joe Biden delivers remarks on reproductive rights as (L-R) Vice President Kamala Harris, and Secretary of Health and Human Services Xavier Becerra listen during an event at the Roosevelt Room of the White House on July 8, 2022 in Washington, DC.
(Photo by Alex Wong/Getty Images)

Politico reported on Friday that Democrats are afraid Biden is running out of time to save his sinking poll numbers. It said Democrats’ “frustration” with Biden has seeped into “outright worry.”

According to the news outlet, people familiar with recent meetings between Democratic governors and the White House have claimed “there’s been a general and growing dissatisfaction” with the administration’s response to key issues. ]

Politico, in conjunction with Morning Consult, also found that more Americans are opposed to Biden running in 2024 than opposed to former President Trump, a troubling development for Democrats.

Sixty-one percent of respondents said they were opposed to a Trump candidacy, with 48% saying Trump should “definitely not” run in the next election and 13% saying he should “probably not” run.

BIDEN WILL FACE 2024 OPPOSITION FROM FAR-LEFT GROUP, CITING “HIS JOB PERFORMANCE AS PRESIDENT”

US President Joe Biden presents Cindy McCain, the widow of former Senator and presidential candidate John McCain, posthumously with the Presidential Medal of Freedom, the nation’s highest civilian honor, during a ceremony honoring 17 recipients, in the East Room of the White House in Washington, DC, July 7, 2022.
(Photo by SAUL LOEB/AFP via Getty Images)

On NBC News’ “Meet the Press,” anchor Chuck Todd walked viewers through a package detailing frustration from likely voters of the Democratic Party. The voters largely cited Biden’s age, and his handling of the economy and abortion as serious causes for concern.

“Democrats don’t fight hard enough…” said Erica Ingram, an Ohio Democrat who previously supported Biden. “We’re about to be in a recession, and they’re not even trying to fight to help… and Biden, to me, just talks in circles.”

Even the progressive wing of the Democratic Party has shifted their thoughts on Biden, a group Biden often catered to in the early days of his term. One progressive group, RootsAction, plans to spend six figures against Biden if he seeks reelection to keep him from securing the Democratic nomination.

The group told Fox News Digital Monday that it plans to run a ‘#DontRunJoe’ campaign that is set to launch the day after the midterm elections, on Nov. 9.

Kids thrive with ‘sittervising’ instead of constant