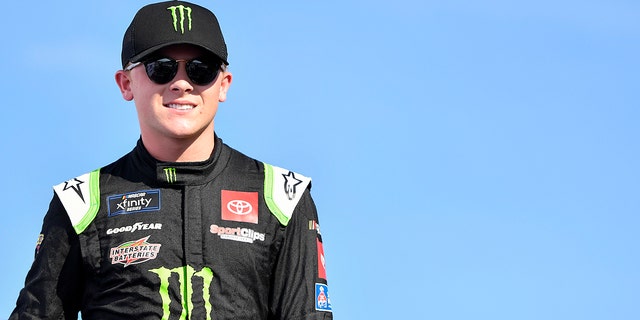 NASCAR Xfinity Series driver Ty Gibbs got his first Cup Series start at Pocono Raceway on Sunday when he was asked to fill in for the injured Kurt Busch.

Busch was suffering from “concussion-like symptoms” after a hard crash into the wall during qualifying on Saturday and was ruled out of the race.

Gibbs drives for Joe Gibbs Racing, which is run by his grandfather and has an affiliation with Busch’s 23XI Racing team. The 19-year-old finished second in Saturday’s Xfinity Series race and leads the series with four wins this season, which made him a perfect candidate to replace Busch.

Gibbs and Busch also share Monster Energy as their primary sponsors and usually drive cars featuring its black and green livery and wear uniforms to match, but that was not the case for Busch this weekend. His car was being sponsored by McDonald’s, and he was wearing a custom red, yellow and white fire suit.

Since a new suit could not be stitched up in time for Gibbs, the team had to get creative to activate the sponsorship to its fullest. Gibbs borrowed one of Busch’s suits to wear during the race despite his being about four-inches shorter, which was partially evident from the cuffs of his pant legs.

“Little sh*t stole my shoes too,” Hamlin tweeted before the race.

Gibbs stuck with his black Monster Energy helmet for safety, but his mish mosh outfit did not seem to have a negative effect as he finished a strong 16th in his debut.

Gibbs finished 18th on the track, but was elevated to 16th after Denny Hamlin and Kurt Busch were disqualified post-race.
(Logan Riely/Getty Images)

Technically, he finished 18th on the track, but race winner Hamlin and runner-up Kyle Busch, another Joe Gibbs Racing driver, were disqualified after the race when their cars were determined to be in violation of series rules, which elevated Gibbs two spots on the official results.

“I had a great time, so, Michael, if you’re watching, I want to say thank you, it’s a big pleasure to wear this on my shoulder and on my shoes,” Gibbs said after the race, as he pointed to the Jordan brand Jumpman logo on his suit.

UK prime minister fined after appearing to wear no seat

Automatic Bot - January 28, 2023 0
A new barrage of Russian shelling killed at least 10 Ukrainian civilians and wounded 20 others in a day, the office of Ukraine’s...
Go to mobile version