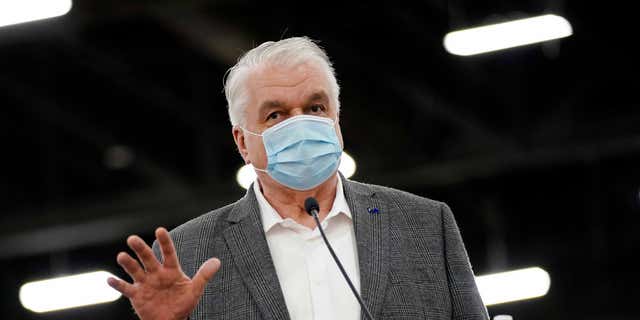 Nevada Gov. Steve Sisolak said Wednesday that if he wins re-election he would seek to codify in law next legislative session an order he signed that protects in-state abortion providers and out-of-state patients.

“Governors are the last line of defense in protecting reproductive freedoms,” he said. “The buck stops with us.”

The announcement came in the side lounge of a Reno coffee and wine shop, where he hosted a panel of obstetrician-gynecologists, medical students and reproductive rights advocates to discuss their plans to protect abortion access, as reproductive rights have become central to his re-election campaign in the key swing state and that of Democrats nationwide.

In the days following the Supreme Court’s decision in June to overturn Roe v. Wade, Sisolak signed the executive order saying that Nevada will not assist other states that try to prosecute residents who travel to Nevada for abortions. It also ensures medical boards and commissions that oversee medical licenses do not discipline or disqualify doctors who provide abortions.

Nevada Gov. Steve Sisolak says that if he wins re-election he would seek to codify in law an order that protects in-state abortion providers and out-of-state patients. Pictured: Sisolak speaks at a news conference on April 29, 2021 in Las Vegas.
(AP Photo/John Locher)

For that order to be turned into law, a lawmaker would have to sponsor the bill and go through the legislative process. Due to Nevada’s biennial legislative structure, it can only be passed in the 2023 or 2025 sessions.

Even in Nevada, where abortion within 24 weeks has been codified into law since 1990, Sisolak has become one of a growing number of Democrats who made the overturning of Roe v. Wade a major talking point. On Wednesday, he said that his role is to “continue the access that exists” and expand funding resources for providers.

Republican gubernatorial nominee Joe Lombardo, an anti-abortion candidate, indicated that he may overturn Sisolak’s executive order but has declined to take a hard position.

“I’d have to evaluate it, and I’d look at it from the lens of being a pro-life governor,” he said in an emailed statement on Wednesday. He previously told local television station KRNV that he would overturn it.

Sisolak has repeatedly said that Lombardo will work to implement a 13-week abortion ban through a referendum if elected. Asked about if he would support restricting abortion access through a referendum vote, Lombardo said if voters or the state legislature bring forward a ballot measure, he would “support giving them the ultimate decision.”

He did not indicate whether he would actively promote a referendum vote.

“I support giving voters the ultimate decision, just as it is codified in Nevada law,” he said.

Republican candidates are hoping a red wave this year brings them back into power in Nevada, where Democrats have enjoyed trifecta control of the governor’s mansion and both chambers of the Legislature since 2018.

But with abortion reemerging as a central campaign issue in this year’s midterms, the party is taking a much different approach than it did in 2014, when it last won control of the statehouse and governorship. That year, the state party dropped a statement opposing abortion from its platform. Yet this year, its top-of-ticket candidates have stressed the right to abortion is codified into state law and it would take a vote of the people in a referendum to restrict abortion here, not a legislative battle like in some other states.

“I’m Catholic and pro-life, but in Nevada, the right to an abortion is codified in law and only Nevada voters can change that,” Lombardo said.

In the coffee shop on Wednesday, Sisolak stressed there were big differences between himself and his opponent.

“People need to make the decision keeping that in mind,” he said. “This is a situation where we cannot afford to take steps back.”

The panel also talked about out-of-state patients coming to Nevada from as far as Texas, as well as neighboring Idaho, Utah and Arizona, which have put forth plans to restrict abortion access. They spoke of a lack of obstetrician-gynecologists training centers and the need for one at the University of Nevada-Reno.

A Planned Parenthood representative spoke of a soon-to-open location by the Reno airport that will help assist a growing number of out-of-state patients that see Nevada as a safe haven.

The question of “what’s next” for abortion access is a topic that touches nearly every statewide race in Nevada. In the tight U.S. Senate race, both candidates have attempted to define the other’s stance.

Democratic Sen. Catherine Cortez Masto has warned that Republican challenger Adam Laxalt could be the deciding vote for a national abortion ban that would supersede Nevada’s state law, a position that Laxalt called a “falsehood.” Laxalt has tried to paint Cortez Masto as an extremist, saying she is advocating for “infanticide” or an abortion up to the moment of birth, a procedure that does not occur.

Notwithstanding clause is popular in Quebec, not elsewhere: survey