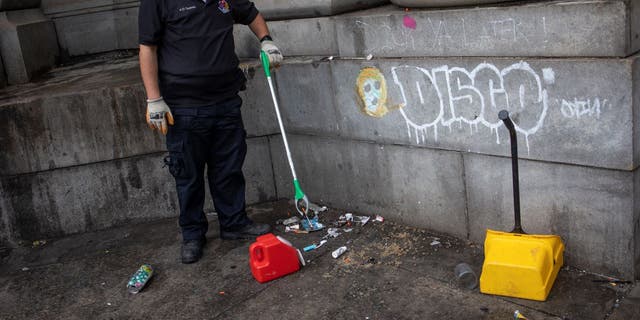 Progressive New York City Council members are pushing a bill that would pay drug users in the city to return used needles as the number of discarded needles on the streets continues to skyrocket.

The proposed legislation, sponsored by Deputy Speaker Diana Ayala, states that it would authorize the [Department of Health and Mental Hygiene] to set the buyback incentive, up to 20 cents per needle, syringe or sharp, with a cap of $10 per individual per day,” New York Post reported.

The legislation, if approved, would start as a one-year pilot program that would then be evaluated by the New York City Department of Health to determine whether it would become permanent.

The bill states that the program would “only be open to individuals” who use the city’s overdose prevention centers (OPC) “for drug consumption.”

A member of a the Department of Sanitation Environmental Police collects used needles as part of a city sweep of a homeless encampment, September 22, 2022 in New York City, New York.
(Photo by Andrew Lichtenstein/Corbis via Getty Images)

“The intent of the bill is to get those folks that are using on our streets and open spaces to bring back the dirty needle (possibly to opc site) as opposed to discarding them improperly,” Ayala wrote on Twitter. Hearings are an opportunity to gather more information and make changes if necessary.”

Ayala’s office did not immediately respond to a request for comment from Fox News Digital.

New York City Mayor Eric Adams appeared open to the legislation in a comment from his office to the New York Post.

Used needles are seen on the street during a city sweep of a homeless encampment, September 22, 2022 in New York City, New York
(. (Photo by Andrew Lichtenstein/Corbis via Getty Images))

“We welcome partnership with the Council to promote safe disposal of syringes and address community concerns, and will review the legislation,” his office said.

Queens GOP councilwoman Joann Ariola told the New York Post she is opposed to the bill.

New York City Mayor Eric Adams speaks at the National Press Club during a press conference on gun violence and other issues on September 13, 2022.
(Nathan Posner/Anadolu Agency via Getty Images)

New York City’s Department of Sanitation environmental police unit picked up 69,692 discarded needles so far this fiscal year which is more than double the number collected during the same time last year.

New York Gov. Kathy Hochul signed legislation in October 2021 that decriminalized the possession and sale of hypodermic needles and syringes.

Additionally, police officers in New York City were told last year to stand down and not arrest drug users for needles even if they contained residue of a drug substance.

Life with Serg - December 3, 2022 23
Today I take you shopping at the world's largest weekend market in Bangkok, Chatuchak Market in Thailand. It's massive and it's been 10 years...
Go to mobile version