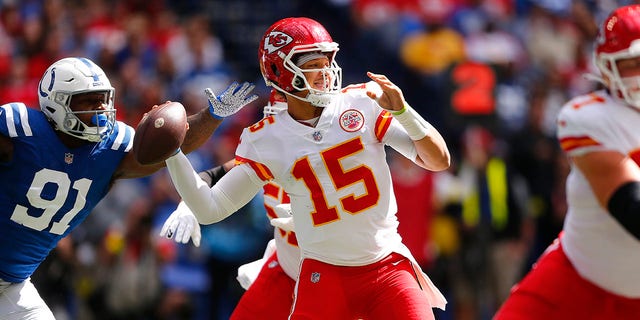 The National Football League Foundation will donate $1 million to Hurricane Ian relief efforts, matching the donation by the Glazer family, owners of the Tampa Bay Buccaneers.

The NFL will also auction a number of game-worn jerseys from the Tampa Bay-Kansas City game Sunday night to support relief efforts.

“Following Sunday Night’s Kansas City Chiefs-Tampa Bay Buccaneers game, the NFL will also be auctioning off a limited number of game-worn jerseys and other unique items which fans can bid on at NFL.com/auction to support the American Red Cross’ Hurricane Ian relief efforts,” the NFL said in a statement.

The Glazer family, owners of the Bucs since 1995, announced a $1 million donation Thursday.

“The destruction suffered in Southwest Florida and the damage inflicted throughout our state will be felt for some time,” said Buccaneers co-owner Darcie Glazer Kassewitz, according to the Bucs’ website.

MIKE EVANS TO RETURN FOR BUCS VS. CHIEFS AFTER ONE-GAME SUSPENSION: ‘I’VE GOT TO BE BETTER FOR MY TEAM’

“It will take entire communities’ resiliently working together for an extended period, and our family is committed to aiding in the recovery. Our thoughts and prayers are with the countless people affected, the heroic first responders and all of those helping to keep others safe.”

A view of empty seats as players warm up prior to a game between the Green Bay Packers and the Tampa Bay Buccaneers at Raymond James Stadium Sept. 25, 2022, in Tampa, Fla.
(Julio Aguilar/Getty Images)

Sunday night’s game between the Chiefs and the Bucs almost had to be moved due to the devastation caused by Hurricane Ian in South Florida.

The Bucs were forced to relocate to Miami, practicing at the Dolphins practice facility this week as they prepared for their Week 4 game.

The NFL announced that U.S. Bank Stadium in Minneapolis, Minnesota, would be used for the game if Raymond James Stadium was damaged. The Minnesota Vikings are playing against the New Orleans Saints in London, making their stadium available.

However, the Tampa area was spared the worst of the damage from the hurricane, allowing the Bucs to play the Chiefs at their home stadium.

“Our thoughts and prayers remain with the many thousands in the Southwest Florida region who have been severely impacted by Hurricane Ian,” the Buccaneers said in a statement Thursday. “We are also very thankful that the Tampa Bay area was spared the most damaging consequences of this powerful storm.”

“We have informed the NFL, after consulting with local and state agencies, that we are ready to play Sunday night’s game against the Kansas City Chiefs at Raymond James Stadium as originally scheduled.”

Both Kansas City and Tampa Bay are coming off of losses in Week 3 losses.

Joe Morgan is a Sports Reporter for Fox News.

Automatic Bot - February 3, 2023 0
Federal lawmakers are demanding action to counter the "threat" posed by the Chinese Communist Party (CCP) after a suspected Chinese surveillance balloon was...
Go to mobile version