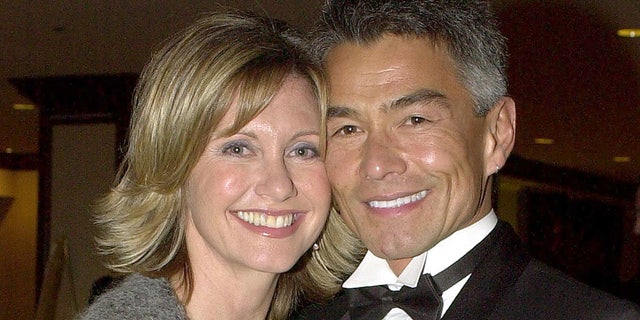 Olivia Newton-John found a unique friendship through devastating times as she leaned on the ex-wife of her then-boyfriend, Patrick McDermott, after he mysteriously vanished following an overnight fishing trip in 2005.

The Grammy Award-winning Australian singer, who starred in the American classic film “Grease,” died on Monday at the age of 73 after battling cancer for nearly 30 years.

As tributes poured in for the beloved actress who campaigned for cancer research and wellness, her longtime pal, Yvette Nipar, wrote she would “miss” Olivia forever after the pair formed the most unlikely bond searching for McDermott when he disappeared nearly 20 years ago.

“My sweet friend–I will miss you forever,” she wrote while using the hashtag Olivia Newton John Forever. Nipar shared a photo from the annual Olivia Newton-John Wellness Walk and Research Run in Melbourne, Australia, in 2019, which benefits the cancer center she founded in 2012.

Olivia Newton-John dated Patrick McDermott for nine years before he mysteriously vanished in 2005. The former couple were pictured in 2001.
(Getty Images)

Their friendship, though, could have never flourished without Patrick McDermott. The cameraman, who was in an on-and-off relationship with Newton-John, was 48 years old when he was reported missing from an overnight fishing trip. McDermott, an avid angler, booked the solo trip on the “Freedom” boat out of the San Pedro harbor in Los Angeles on June 30, 2005, with 22 other passengers and crew members.

His belongings, including car keys, a passport and wallet, were found on the boat and his vehicle was recovered from the parking lot, and McDermott missed a family event on July 6, but it wasn’t until July 11 when he was reported missing to authorities by his ex-wife, Yvette Nipar.

McDermott had previously been married to Nipar for two years, and the former couple have one son, Chance. Reports at the time said he had money problems and owed $8,000 in outstanding payments on child support, and had filed for bankruptcy in 2000 with an additional $31,000 in debt.

Speculation mounted that McDermott faked his death, with conspiracy theorists claiming he was living a reclusive life in a fishing village in Mexico. Each allegation returned to be false.

During a 2006 interview with Larry King, Olivia admitted McDermott’s missing person investigation brought her “close” to Nipar and their son.

Nipar, an actress whose roles include appearances on “21 Jump Street” and “RoboCop,” posted on Instagram years later, “I’ll never forget her calling me from the green room right after this, knowing how protective I was of my son’s name constantly being “put out there.” She had no idea Larry was going to ask this.”

Newton-John told Australian Women’s Weekly magazine in 2009 that she’ll never get over the trauma of losing McDermott. “I think there will always be a question mark … I don’t think I will ever really be at peace with it.”

In 2012, Nipar campaigned for Amazon CEO Jeff Bezos to stop selling a book promoting that McDermott was still alive.

Patrick McDermott and Olivia Newton-John dated for nine years before his disappearance in 2005. Pictured in January 2005.
(Jeff Vespa Archive)

“My son has been through enough emotional torment over this,” Nipar wrote the billionaire about the “well-known serial liar” Philip Klein for his book, “Lost at Sea.”

In 2016, Olivia told Australia’s “60 Minutes” that McDermott “was lost at sea, and nobody really knows what happened.”

“It’s human to wonder,” she added. “But you know, those are the things in life you have to accept and let go. Because whenever you go through difficult times, there’s always those concerns.”

Nipar, a former actress with credits on “General Hospital” and “Melrose Place,” has shared social media posts that she’s in the process of writing a book about the incident, titled, “What Are The Chances?”

She shared a photo with Newton-John in 2021 on Instagram and wrote, “What are the chances this gal & I would help each other get through one of the most bizarre and difficult times of our life? So #blessed to have you in my life.”

Newton-John married John Easterling in 2008 on top of a mountain in Peru during an Incan spiritual wedding ceremony. They returned to Florida and made their union legal with a beachfront wedding on Jupiter Island.

Easterling founded Amazon Herb Company, and formulated a special blend of cannabis called “Olivia’s Choice” for his wife, who was also an advocate for the plant medicine.

Olivia Newton-John (R) and John Easterling married in 2008 in Peru after meeting through friends 15 years before. Pictured in 2015
(Rodin Eckenroth)

Olivia Newton-John and John Travolta dance in a crowded high school gym in a still from the 1978 Paramount film “Grease.”
(Paramount Pictures/Fotos International)

Newton-John died “peacefully at her Ranch in Southern California this morning, surrounded by family and friends,” her family shared on Monday.

“We ask that everyone please respect the family’s privacy during this very difficult time. Olivia has been a symbol of triumphs and hope for over 30 years sharing her journey with breast cancer.”

The “Hopelessly Devoted to You” songstress was known just as much for her top hits, including “Physical” and “You’re the One That I Want,” as she was for her starring role alongside John Travolta in “Grease.”

“Her healing inspiration and pioneering experience with plant medicine continues with the Olivia Newton-John Foundation Fund, dedicated to researching plant medicine and cancer. In lieu of flowers, the family asks that any donations be made in her memory to the @onjfoundation,” the family said.