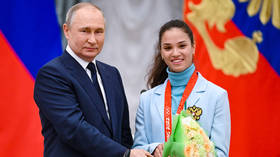 Russian Winter Olympics cross-country skiing champion Veronika Stepanova has questioned the West and its media for predicting the downfall of her country when the military conflict with Ukraine broke out, pointing to contrasting energy prices and the overall mood.

Sharing a clip on social media of a recent marathon in her homeland, Stepanova observed: “10,000 people at the start of a marathon race, a celebratory atmosphere. This was the Russian city of Perm on the weekend.

“I remember very well how some half a year ago, when the West just introduced the sanctions against Russia, all sorts of well-wishers from abroad were writing to me, predicting my country’s imminent collapse, chaos, and desperate crowds rushing for Europe,” the 21-year-old recalled.

“Crowds, on [the] move, right?!” she added with a smiley rolling its eyes.

“Yesterday I ran through the streets of Perm in that jubilant crowd of marathoners and thought: ‘You, my friends in the West, you still believe in all sorts of garbage your media is selling you, don’t you?’

“By the way, gasoline in Perm is under 90 euro cents in equivalent, and electricity prices… well,  I don’t want to upset you. Come to sporting competitions in our ‘chaos and collapse’, you shall see for yourself!” Stepanova added.

The IOC made the recommendation back in February to ban Russian athletes from international competitions – a call which was heeded by numerous sporting federations.

Speaking to Bild in Germany last month, Bach said that now is “not the time” to lift the ban on Russia but also said that just 50 countries in the world supported sanctions, meaning that “we have about 150 National Olympic Committees in the IOC whose governments have not imposed any sanctions” on Moscow.

Beijing 4×5km relay champion Stepanova pounced on the remarks, suggesting that they didn’t tally with the IOC’s previous advice.


“It’s well said here! Now we are waiting for deeds to follow words,” the youngster wrote on Instagram.

“…I promise you, Mr. Bach, that I will train with triple the energy so that it is you, and no one else, who will give me a medal at future Games!

“I don’t know about you, but it will give me special pleasure to see your face at the same time,” Stepanova added.

Earlier reacting to the refusal of Norwegians to invite her compatriots to the ‘Blink’ roller-ski event, Stepanova has also accused the Western world of “masochism.”

“Do they want to ‘cancel’ Russian athletes in Europe, and if so, for how long?” she posed.

“Western politicians and, in part, sports functionaries are one thing, but competition organizers, equipment manufacturers and athletes are quite another.

“I’m calmly preparing and waiting until a sense of reality returns to the West and cures their current masochism,” the skiing sensation concluded.

Kenya is A Nation of Revival ||Apostle John Kimani William