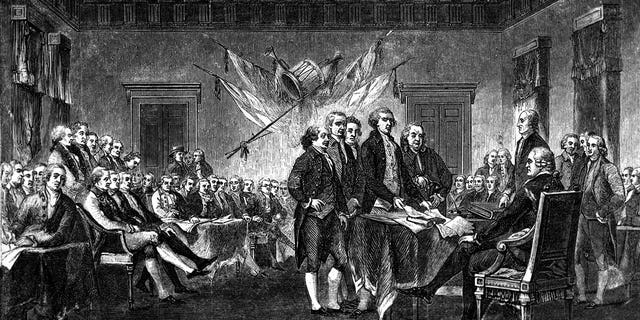 The Declaration of Independence, the most consequential and perhaps most heroic challenge to authority in human annals, reached the ear of King George III in London on this day in history, August 10, 1776.

The Second Continental Congress voted for Independence on July 2, the day the Founding Fathers expected succeeding generations to celebrate.

The document was officially adopted July 4, the date remembered as Independence Day in the United States.

The document arrived in London via sail, about 3,500 miles from Philadelphia across the Atlantic Ocean, a little more than five weeks later.

MEET THE AMERICAN WHO WROTE ‘THE BATTLE HYMN OF THE REPUBLIC’

“The history of the present King of Great Britain is a history of repeated injuries and usurpations, all having in direct object the establishment of an absolute Tyranny over these States,” the signatories declared in July, pointing their pens directly at the monarch, the most powerful man in the world at the time.

The Founding Fathers signed their names to the Declaration at risk of death — a fact of which they were fully aware.

This undated engraving shows the scene on July 4, 1776, when the Declaration of Independence, drafted by Thomas Jefferson, Benjamin Franklin, John Adams, Philip Livingston and Roger Sherman, was approved by the Continental Congress in Philadelphia. The words “all men are created equal” are invoked often but are difficult to define.
(AP Photo)

“We mutually pledge to each other our Lives, our Fortunes and our sacred Honor,” stated the 56 signatories at the end of the document, after they enumerated their grievances against the king.

The Declaration’s ideals were shocking in a world ruled since time began by strongmen, tyrants and unelected, hereditary monarchs such as King George.

4TH OF JULY QUIZ: HOW WELL DO YOU KNOW INDEPENDENCE DAY?

Its notions that “all men are created equal,” that human rights come from God and not other men, and that governments derive their powers from “the consent of the governed” challenged all global authority for the first time in history with real action, not just the thoughts of idle philosophers.

There is no known public record of how King George reacted the moment he heard the stunning rebuke of his authority.

Founding Father John Adams, center, enjoyed the profound pleasure of declaring independence from Great Britain in 1776, negotiating the Treaty of Paris, which secured American independence in 1783 and then serving as the new nation’s first ambassador to Great Britain. This engraving shows the future American president as he greets King George III of England as U.S. ambassador to St. James’s Court in 1785.
(Stock Montage/Getty Images)

Such a record may exist. The Georgian Papers Programme was created in 2016 at the behest of Queen Elizabeth II, who counts the king as her third great-grandfather.

It contains about 350,000 pages worth of documents from the monarch that had been held for 200 years in Windsor Castle’s royal archives. Scholars are still poring through the voluminous catalogue.

The crown had already sent a massive force to invade Brooklyn, which it did successfully in late August. But plans for that attack were in place before the American Declaration of Independence reached London.

AMID GUN LAWS, HERE’S THE TRUE STORY BEHIND THE ‘RIGHT TO KEEP AND TO BEAR ARMS’

The king’s emissaries, brothers Viscount Richard Howe and General William Howe, issued a responding declaration to the rebels on September 19, considered by many historians the crown’s first official response to the American outrage.

It stated the king might be willing to compromise should the rebels reconfirm their allegiance to the crown.

The rebels did not.

The king publicly addressed the colonial insurgents for the first time in a speech before Parliament on October 31.

“So daring and desperate is the spirit of those leaders, whose object has always been dominion and power, that they have now openly renounced all allegiance to the crown, and all political connection with this country,” the king told the English assembly.

“They have rejected, with circumstances of indignity and insult, the means of conciliation held out to them under the authority of our commission; and have presumed to set up their rebellious confederacies for independent states.”

“The Declaration did not establish the independence of the American colonies,” British repository Britannica notes.

“Complete separation from Britain would have to be accomplished by force. Once the Declaration had been adopted, however, there was no turning back.”

Pumpkins are for gratitude: One family’s secret for