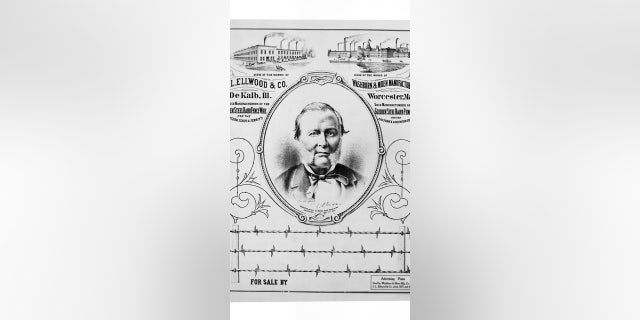 Barbed wire is a commonly used product in agriculture, transportation and other industries.

The unique design and structure make this wire creation sturdy — and sometimes harmful to the touch.

And on this day in history, Nov. 24, 1874, the first commercially successful barbed wire was patented by Joseph Farwell Glidden.

Glidden was an American farmer originally from Charlestown, New Hampshire.

After growing up in Clarendon, New York, and finishing school, he returned to his father’s farm to work, according to Britannica.

A portrait of inventor Joseph Farwell Glidden is shown here — at the center of an advertisement for Glidden Steel Barb Fence Wire.
(Library of Congress/Corbis/VCG via Getty Images)

Years later, he landed in De Kalb, Illinois, and obtained a farm of his own.

After seeing a sample of barbed wire at the De Kalb Count Fair in 1873, Glidden decided to make some improvements of his own on the product — and ultimately applied for a U.S. patent.

But he was not alone.

Two other men also applied for a barbed wire patent with changes of their own: lumberman Jacob Haish and merchant Isaac Leonard Ellwood, according to Encyclopedia online.

Glidden, however, was the man who was awarded the patent.

The original patent on barbed wire was filed in the United States in 1867, but Glidden obtained the patent on the new and improved form in 1874, according to Britannica.

Barbed wire normally consists of two long wires that are twisted together to form a cable.

ON THIS DAY IN HISTORY, OCT. 24, 1861, TRANSCONTINENTAL TELEGRAPH COMPLETED, CONNECTING COAST FOR THE FIRST TIME

The wire comes in many varieties, depending on its uses.

“Barbed wire will discourage unwanted entry and is suited to a variety of containment needs,” according to the Home Depot website about store-bought barbed wire.

Glidden’s barbed wire became widely popular — and continues to be used across the country today.
(iStock)

“It can also be used with chain link or other fencing barriers for an additional layer of security.”

Shortly after obtaining the patent, Glidden also developed a machine to help with producing the new and improved barbed wire.

Glidden then asked Isaac L. Ellwood to join him in creating a fencing company: Barb Fence Company of De Kalb.

The two worked together to create the product, which served as a way to protect livestock on their land.

The option of wood fencing was always there; however, it was expensive for landowners with hundreds of thousands of acres.

Barbed wire is commonly used as fencing for livestock on ranches.
(iStock)

Barbed wire, however, was cheaper and easier to install.

Just one year after creating the fencing company, Glidden sold his half of the business to the Washburn and Moen Manufacturing Company of Worcester, Massachusetts, according to Encyclopedia online.

Glidden was thought to have received more than $60,000 and royalties for life on the patent.

Just 15 years after the creation of barbed wire, fenced-in land replaced the once-open range in the western United States, according to Britannica.

Deplatforming only proves the conspiracy theory to be correct