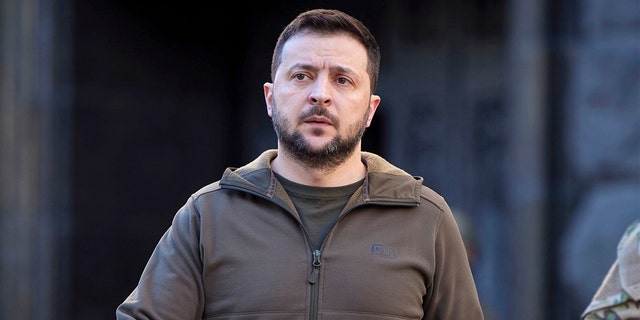 Ukraine’s President Volodymyr Zelenskyy said Sunday evil has returned to Ukraine as he gave an emotional address for Victory Day, when Europe commemorates the formal surrender of Germany to the Allies in World War II.

The life that soldiers fought for in that war came to an end Feb. 24, when Russian forces invaded, he said in a video message.

BUSH CALLS ZELENSKYY THE ‘CHURCHILL OF OUR TIME’

“The evil has returned. Again,” Zelenskiyy said. “In a different form, under different slogans, but for the same purpose.”

But he said Ukraine and its allies will win.

“No evil can escape responsibility, it cannot hide in a bunker,” he added.

Nazi leader Adolf Hitler spent the last days of his life in a bunker in Berlin, where he committed suicide in the final days of the war.

Moscow calls its actions since Feb. 24 a “special military operation” to disarm Ukraine and rid what it calls “Nazis” and anti-Russian nationalism fomented by the West. Ukraine and the West say Russia launched an unprovoked war of aggression.

ZELENSKYY TO FOX S: RUSSIA IS ‘FOLLOWING THE CONCEPT OF GOEBBELS’ WITH HITLER COMPARISON

Tetyana Boikiv, 52, right, meets and hugs her neighbor Svitlana Pryimachenko, 48, during a funeral service for her husband, Mykola Moroz, 47, at the Ozera village, near Bucha, Ukraine, April 26, 2022. Mykola was captured by the Russian army from his house in the Ozera village March 13, taken for several weeks to an unknown location and finally found killed with gunshot wounds about 15 kilometers from his house.
(AP Photo/Emilio Morenatti)

The invasion in Ukraine has killed thousands and displaced nearly 10 million people. It has left Russia in the grip of tough Western sanctions and has raised fears of a wider confrontation between Russia and the West.

In Russia, Victory Day on May 9 is one of the country’s most important national events — a remembrance of the enormous sacrifices made by the Soviet Union in defeating Nazi Germany.