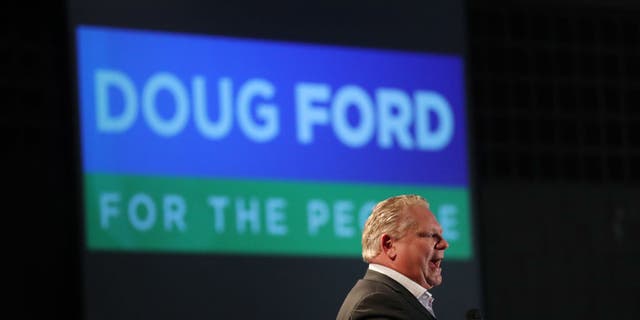 A court in Ontario froze access to the millions of dollars in the GiveSendGo account of the Canadian “Freedom Convoy” on Thursday.

Ontario Premier Doug Ford’s office said in a statement that the province’s attorney general brought an application in the Superior Court of Justice for an order “prohibiting any person from disposing of, or otherwise dealing with, in any manner whatsoever, any and all monetary donations made through the Freedom Convoy 2022 and Adopt-a-Trucker campaign pages on the GiveSendGo online fundraising platform.”

“This afternoon, the order was issued. It binds any and all parties with possession or control over these donations,” Ford’s office added.

Doug Ford skips the Provincial Leaders debate hosted by the Black Community to campaign in Northern Ontario including this a rally attended by approximately 300 people at Cambrian College in Sudbury, on April 11, 2018.
(Steve Russell/Toronto Star)

The account with GiveSendGo, which describes itself as a Christian crowdfunding site, had raised $8.4 million as of Thursday. The convoy had previously raised more than $10 million with GoFundMe until the platform shut it down last week at the request of Canadian officials and refunded the money.

“Canada has absolutely ZERO jurisdiction over how we manage our funds here at GiveSendGo,” a spokesperson for the company told Fox News Digital. “All funds for EVERY campaign on GiveSendGo flow directly to the recipients of those campaigns, not least of which is The Freedom Convoy campaign.”

Ford said Wednesday that he had spoken with Canadian Prime Minister Justin Trudeau about what he described as “the ongoing occupations in Ottawa and Windsor.”

“We will continue working together to support our police forces as they manage these situations. We both agreed this must come to an end,” he tweeted.

Truckers have blocked the Ambassador Bridge in Windsor, Ontario, for days, snarling traffic on the busiest artery along the U.S.-Canada border in protest of the country’s vaccine mandates. Truckers also continue to demonstrate in Ottawa, the Canadian capital.

GiveSendGo CFO Jacob Wells previously told Fox New Digital he had not been contacted by Canadian authorities directly regarding the new crowdfunding campaign on his platform. He pointed out that the campaign was created by the organization Freedom 2022 Human Rights, which is a sanctioned Canadian nonprofit, meaning it was cleared by the Canadian government to collect donations for humanitarian relief.

Fox News Digital has reached out to the Freedom Convoy’s legal counsel at the Calgary-based Justice Centre for comment.

This Christian song is a MASTERPIECE!