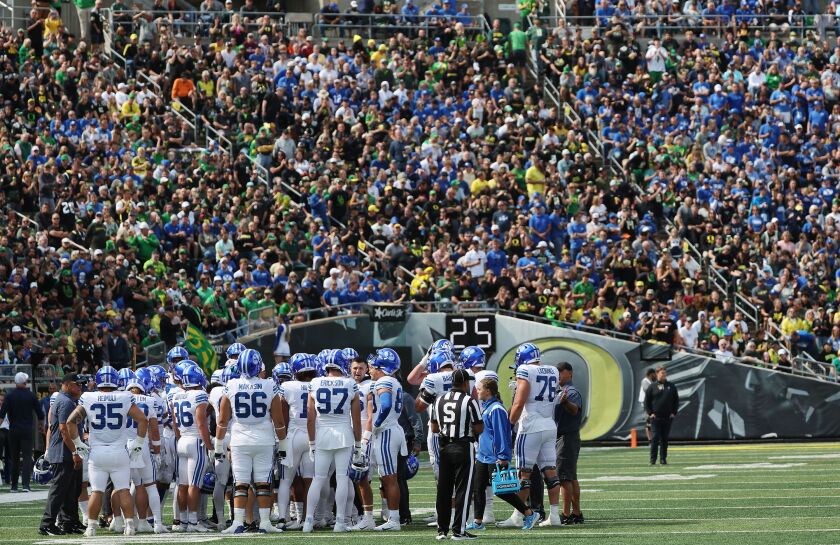 You won’t find them referenced anywhere in the box score, but the mad scramble by USC and Oregon, the crown jewels of the Pac-12, speaks volumes as to ignorance and indifference when it comes to religious bigotry.

During BYU’s game at USC last November and again Saturday at Oregon, the Cougars and their fans were peppered with a derogatory chant. The frequency and volume at the Los Angeles Coliseum was so loud it bled into the ESPN broadcast.

There was an encore performance Saturday at Autzen Stadium in Eugene. I wasn’t there to witness it for myself, but I have read the social media reports from many fans in attendance and I’ve watched their video recordings.

One video in particular shows the Ducks student section chanting and clapping in unison. Not every Oregon fan participated, but in this particular instance, no one is seen standing up and telling them to stop either.

It’s not funny and if you think it is — you are part of the problem.

To no surprise, as was the case with the USC incidents, there is no national outrage. Instead, we hear a lot of things like this — “It’s just name calling, deal with it” or “Grow some thicker skin” or “If you can’t handle it, don’t go to the game” or “That’s just a BYU thing.”

But mostly, without openly admitting it, what BYU fans, or members of The Church of Jesus Christ of Latter-day Saints who are sensitive to history, hear are essentially the same things that chased the pioneers across the United States more than 170 years ago.

It wasn’t OK back then, and it isn’t OK today.

Even more stunning is this is coming from the “woke” crowd — the rising generation of young people who pride themselves on sensitivity to everyone and everything. They are the first to freak out when someone has their “personal freedoms” openly scrutinized.

What if those among the crowd at USC and Oregon directed the derogatory chant at Blacks or Muslims? Would ESPN call that “Outside the Lines?” How is that any different?

It isn’t any different and it’s not just an attack on BYU either. It’s an arrogant slight toward a specific religion — a religion that is followed predominantly by fans of the reigning Pac-12 champion University of Utah. The Utes hear it, too.

The Pac-12 is a conference that prides itself on forward thinking, personal freedom and intellectual advancement. They call itself the “Conference of Champions,” and yet, in its two most revered football cathedrals, the preaching is just the opposite.

USC issued this statement after the Nov. 27, 2021, game: “The offensive chant from our student section directed toward BYU during the football game last night does not align with our Trojan values. It was distasteful and we apologize to the BYU program.”

The Oregon student section, “The Pit Crew” also released a statement: “To all @BYUfootball fans in attendance at today’s game we would like to apologize for the actions of the students in attendance. We do not condone or support any hateful speech directed towards one’s religion and are ashamed of those who participated.”

BYU is not free from scandal either, including a recent incident that flooded the national talk shows. A Duke player alleged that a racial slur was shouted at her from the BYU crowd throughout a volleyball match at the Smith Fieldhouse.

The national outcry on ESPN and other talk shows was, “How could this happen and, even worse, how could anyone who heard it allow it to continue without doing anything about it?”

While acknowledging there is no place at BYU for such behavior, a school investigation revealed no evidence to support the claim, not even from the player’s own teammates. While the public relations damage was immense, in this very public case, the facts did not support the narrative.

BYU is still waiting for its apology.

The religious bigotry and hate incidents at USC and Oregon, however, were witnessed by thousands with video as supporting evidence. It should rekindle the outrage and trigger the talk shows — how could this happen and, even worse, how could anyone who heard it allow it to continue without doing anything about it?

What’s ironic is USC and Oregon have church members throughout their respective fanbases — and on the teams they so passionately cheer for.

In contrast, BYU recently finished a home-and-home series against Baylor, the 2021 Big 12 champions. Whether in Waco (last year) or in Provo (last week), the accounts by fans on both sides of the budding rivalry spoke of genuine respect and appreciation.

There were no derogatory chants when the teams played at Baylor last year. Just the opposite. In fact, the Bears put BYU president Kevin J Worthen in their homecoming parade. Last week, Baylor, a Baptist school, received the royal treatment in Provo. The Cougars put Baylor president Linda A. Livingstone on BYUtv during the pregame show.

Big 12 commissioner Brett Yormark attended the game and noted the excitement and enthusiasm of the night was “unbelievable.” Baylor fans posted pictures online of BYU handing out free ice cream in the second half, while the Cougars were beating their Bears on the field.

Afterward, there were no apologies offered by either administration. None were needed. It was just a football game between student-athletes, sponsored by two different denominations, that was celebrated by a soldout crowd (63,400) and the largest late-night audience on ESPN in six years (2.4 million).

For years, BYU fans have believed that religious bias and bigotry is what kept the Pac-12 from inviting the Cougars to join the conference. I’d like to believe that is not the case. But as for BYU’s last two road games in Pac-12 venues, against the league’s most respected programs, the evidence is abundant that the Cougars are better off in the Big 12.

While the faith bases may vary in the league that will stretch from Provo to Morgantown, West Virginia, at least they have some and are not afraid to proclaim it. The ideology is more closely aligned to how BYU operates. It’s where faith is promoted and believers are respected.

For sure, there will be rough crowds and hurtful things said during football games, especially when BYU wins (like last year at USC). But the derogatory chant is likely to be preserved for the self-identified elites on the West Coast who can’t seem to get out of their own way.

The next Pac-12 venue BYU is scheduled to play in is Rice-Eccles Stadium when they reunite with Utah on Sept. 7, 2024. Who knows? By then, the battle might be a conference game — in the Big 12.

No matter, the rivalry will be as spirited as ever and the trash talk will flow freely. Even BYU and Utah have struggled at times to keep “religion” out of the game. I have marveled at how the famed Muss (Utah student section) will often mock BYU players for living an honor code — while many of them are living it themselves?

There is a place for good, creative banter and college football’s greatest rivalries are decorated by them. But at no time, even with our protected freedom of speech, is it acceptable to so crudely denounce an entire religion, or race, or creed in a public venue.

On top of that, it’s just flat out embarrassing to watch.

Never mind the box score, the Pac-12 is on a losing streak — two games and two apologies — with the two crown jewels, Oregon and USC, in need of some public polish.

Dave McCann is a contributor to the Deseret News and is the studio host for “BYU Sports Nation Game Day,” “The Post Game Show,” “After Further Review,” and play-by-play announcer for BYUtv. He is also co-host of “Y’s Guys” at ysguys.com.

US ambassador to Ukraine tells Fox: Russia guilty of

The Mark of the Beast, The Antichrist and the Great Tribulation